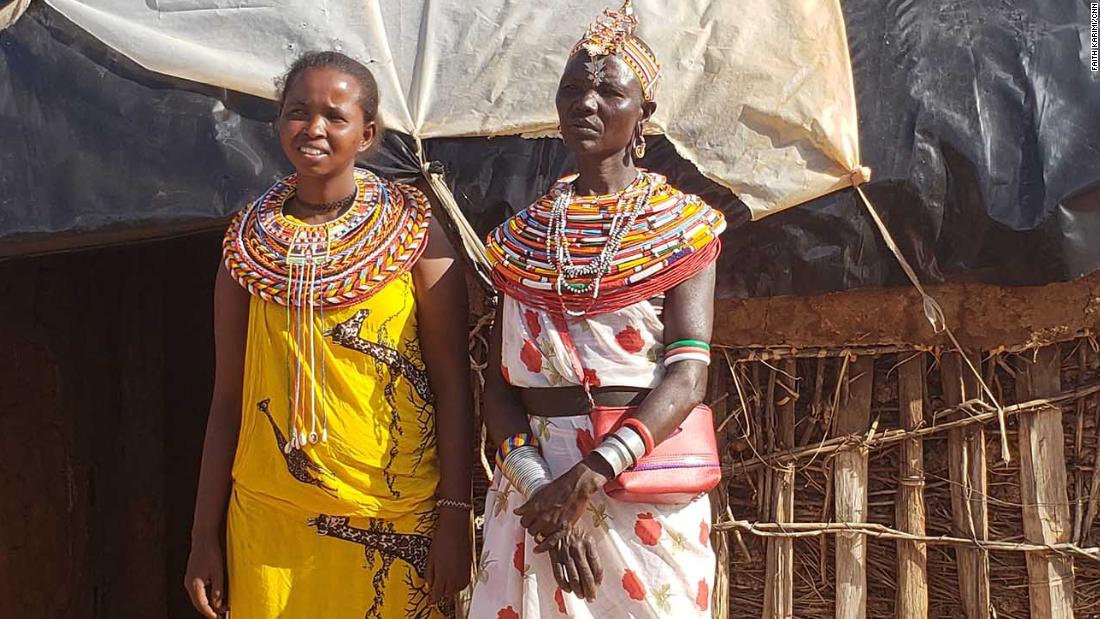 At age 18, she lives in a women-only village in northern Kenya, where she spends her nights doing homework, fetching firewood or sprinkling colorful jewelry.

Learpoora calls Umoja a home from the age of three. There, a group of 48 women live with their children in huts protected by prickly shrubs to ward off intruders. When a man transgresses, they notify the local police, who issue a warning or arrest the guilty – depending on the number of offenses.

Since then, it has become a refuge, sheltering women who escape abusive marriages, female genital mutilation, rape and other forms of aggression. Even some women whose husbands died found solace and a home there.

She went to the village at 3 years old.

Learpoora never met her father – she was told that he died when she was 3 years old. Terrified that her extended family would force her to undergo female genital mutilation, her mother would tie her behind and flee to Umoja, where they lived as a part. of the fellowship for 15 years.

The women of Umoja are all from the Samburu culture, an extremely patriarchal society that practices female genital mutilation and believes in polygamy.

The Umoja women span generations, with the village's oldest resident 98 years old and the youngest being six months old. Women of all ages flee there, some with newborn babies in tow.

When the boys who live there with their mothers reach the age of 18, they need to leave the village, says Learpoora.

In the village, traditional Samburu huts known as manyattas dot the landscape. The sounds of chattering chicken and laughing children fill the air.

Like the other women in the village, Learpoora lives with her mother in a small variety made of wood, branches and cow dung. Inside, the only light is from the embers of a fire anchored by three large rocks.

At night, the small modular structures are full of life, with women chatting around the fire to talk about the day beans and corn cook in large pots.

"I grew up surrounded by so many women," says Learpoora. "It's like having different mothers around you."

Outside the huts, the women sit on mats watching the children play. Sometimes they sing and dance traditional Samburu songs, their colorful ornaments and wrapping move with the beat. Other times, they discreetly round beaded necklaces that are a trademark of the Samburu women, who sell to make money for the community.

"Once they sell the collars, they give the money to the village matriarch, who then allocates the amount of food to each family based on the number of children per property," says Learpoora. "Part of this money is also earmarked for education, especially for young women."

In addition to selling jewelry, women earn income by operating a camp for tourists who go on a safari to the Samburu National Reserve. They also receive donations from sympathizers from around the world who have read about the village.

She wants girls to have the power to choose

In a culture that does not believe in educating women, Learpoora is one of the village models. She is in grade 11 at a nearby school and hopes to become a teacher.

"If I had not come here, I do not know what my life would be," she says. "I probably would have suffered female genital mutilation and married as a second or third wife to an older man. These women raised me, allowed me to be educated and challenged all those traditions."

Under the Samburu culture, young women are forced to marry older men as second or third spouses in exchange for a dowry, which is paid to the parents.

"Women's inheritance and polygamy are culturally accepted practices and society is patriarchal, so women have no voice and have less power," says the Kenyan government's National AIDS Control Council. Under the Samburu culture, it is not uncommon to see girls "9 or 10 years old" getting pregnant, she says.

While times are changing and some of these practices are dying slowly, Samburu remains one of Kenya's most traditional and patriarchal cultures, making the village more of an anomaly.

Learpoora says that when she grows up, she wants to be a teacher and help women fight against this mentality.

"I want to teach girls that education is important, that you do not have to undergo FGM, just because it's tradition does not mean it's the way it should be," she says.

She says growing up in Umoja has allowed her to thrive without the threat of female genital mutilation and forced marriages. And she wants to play a role in ensuring that other girls have an education, giving them the power to choose. At least 73% of the Samburu community is illiterate, most of them girls, says the NACC.

Learpoora attends a mixed school where she says she is learning to interact with young men. She wants to get married in the future, she says.

"But her future husband will have to find many mothers and promise not to be abusive," says Jane Lengope, 45, one of Umoja's women. Learpoora's mother was out of town visiting relatives and unavailable.

The village is not always popular

While the village has trained some women in the community, it also has its critics. Some of the residents of nearby communities describe women as very radical and capitalist.

Lawas Lemoro, 25, says she does not believe that women live in a single sex society. "They sneak in the middle of the night to find men or bring them to the village," he says. "Either this or they are using history as a way to make money."

When asked if the men enter the village, the Learpoora and the women say no. The only men who try to come are the husbands who seek their wives, she says, and are promptly expelled.

What happens when women leave?

Faith Mwangi-Powell, global director of The Girl Generation in Nairobi, says that while she applauds women for becoming advocates for change, her approach does not address the issue in the wider community.

"I think women are very brave and we need braver women and that's the only way FGM will end – then the village of Umoja should be congratulated," she says. "But we need to figure out how this change can cascade the whole community so that the girls who grow up in the village remain safe when they leave the village."

Mwangi-Powell says that without a comprehensive change, the village only provides temporary relief.

"Change needs to be holistic, where there is total abandonment in communities through social change, so that everyone is safe no matter where they are."