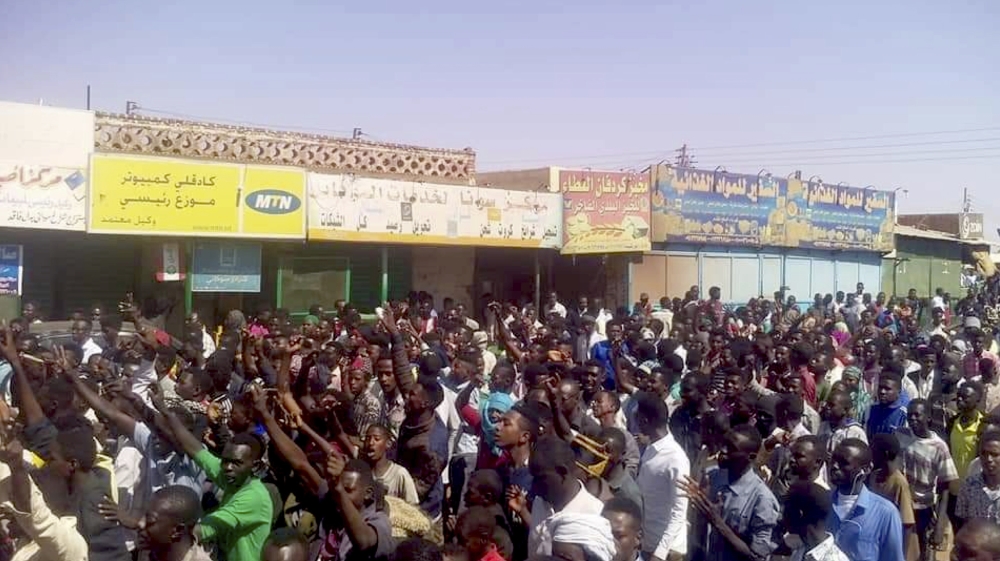 Sudan has had two successful revolutions so far. In 1964 and 1985, mass protests overthrew military dictatorships and installed civilian governments. Both times, political turbulence erupted in the capital, Khartoum, and its residents, intellectuals and elites played a key role in the fateful political events that unfolded.

Today, we are in the midst of what many are already calling another revolution. This time, however, the revolutionary vanguard is not based on Khartoum. Instead, the popular revolt began on the periphery and swept across the country.

It all began in the town of Atbara, northeast of the Nile. On December 19, tthousands of people took to the streets to protest against rising prices and shortages of basic supplies. The demands of the crowd quickly evolved from bread and fuel to the fall of the regime, and the construction of the ruling party in Atbara was set ablaze. Barbar and el-Damer, also in the northeast of the river Nile, also took the streets with casualties in the two cities.

The next day's protests spread like wildfire across the country to places like the eastern city of Gadarif, who had never witnessed major demonstrations before. According to the independent activist group the-Mustagloon (Independent), government forces fired on 22 demonstrators on the first day of protests.

Then Rabak, the capital of White Nile state in the south, joined the protest movement and another party party office in power was set ablaze. In the northern capital of Kordofan, el-Obeid, clashes between demonstrators and security forces have increased, resulting in assault of the city's main hospital. Medical workers were beaten and arrested, leading doctors to announce a general strike in the city.

Residents of el-Fasher and Niyala in the western region of the conflict Darfur also took to the streets. The protests broke out not only in the towns and villages but also in the depths of the countryside. In the state of el-Jazeera, neighboring the state of Khartoum, villagesSome of which were completely unknown to the inhabitants of Khartoum, also witnessed demonstrations.

By mid-January, 15 out of 18 Sudanese States were part of the protest movement.

Khartoum was, of course, among them, but never took a leading position. In fact, before the outbreak of the protests, the Sudan Professionals Association (SPA), a group of trade unions and trade unions, planned a march in the capital to demand a The minimum wage. The spontaneous demonstrations in provincial capitals caught their activists by surprise and it was not until December 25 that the organization finally made its march.

So how did the Sudan camp awaken and take on Khartoum's political struggle?

Sudan's economy is in freefall since South Sudan achieved independence in 2011 and the country has lost 80 percent of its oil revenues. The country had no other sector to rely on and widespread corruption meant that while the country was the largest recipient of loans China and Gulf countries, there was no way to stop this economic deterioration.

The economic situation was particularly bad in 2018. By then Sudan had accumulated US $ 50 billion in debt and their allies refused to give more letters. In the first months of the year, gasoline and diesel disappeared almost completely from the market. People could not your savings of banks or any money at ATMs. In the summer, long lines of bread stretched across the country.

The situation in the field was much worse, as the government was anxious to make the economic deterioration less visible in its capital. He worked hard to provide fuel and wheat for Khartoum and often meant cutting off rations from other states.

In Kassala state in the east, I personally saw fuel lines running through some streets and people were waiting in line for three days to get gas. Fuel has become scarce in Medani, the closest large city to Khartoum, and almost nonexistent in Gadarif. The city of Kadugli, in southern Kordofan, ran out of electricity for months, operate power generators. The shortage of bread has also been particularly severe throughout the Sudanese camp.

This was not the first time the political elite in Khartoum had brought people from the provinces to the edge to make sure their lives were comfortable. However, this time it seems that his maladministration and arrogance went too far.

We are all Darfur.

The field has been sidelined for a long time. Southern Sudanese fought a war for 21 years (1983-2005), infuriated by their status as second-class citizens. Then, in 2003, the people of Darfur started their fight against economic inequality, injustice and ethnic discrimination. Conflicts continue to rage in the Blue Nile and South Kordofan states where the central government has also failed to develop the local economy and recognize local residents as equal citizens.

For decades power, wealth and opportunity have been monopolized by privileged ethnic groups concentrated in the central part of the country, particularly in the capital, which has the best infrastructure and services in Sudan.

Set in the elegant quarters of Khartoum, these political elites now feel threatened by the revolutionary wave sweeping the country. Misjudging the situation, they kept the overwhelming majority of their security forces in the capital, to protect their power, wealth and families.

The revolt in the field caught them by surprise and now their strength is stretched. They have struggled to control the situation by mobilizing troops, particularly the border patrol and the Rapid Response Forces, a militia previously used in Darfur. But not even they will be enough to end the protests that spread through the country to the most remote parts.

The Sudanese government failed not only to annul mass protests by force, but also to dictate public discourse. People outside of Khartoum are now in control of the narrative and use social media to broaden their struggle and their voices.

During the first week of the protests, the authorities, in a much-anticipated move, arrested dozens of students from Darfur and accused them of being saboteurs and part of a group. rebel group. These spurious accusations did not influence public opinion, as the protest movement fought successfully and responded singing "You arrogant racist, we are all Darfur!".

This is now one of the most popular slogans used by demonstrators from Darfuri and not Darfuri across the country, from Gadarif to Khartoum. The Darfur struggle that has suffered in refugee camps and militias over the past 15 years is finally in the spotlight. And so is the struggle of all other dispossessed, impoverished, and marginalized people throughout the country.

Time has finally come for real political change, which must change the dynamics of power between the dominant capital and give justice to the field.

This movement needs to address past grievances, reform how power is divided and how wealth is shared across the country. For this to happen, a decentralization process must be carried out to allow each state to decide how it wants to be governed.

Justice should be served to conflict victims in Darfur, Blue Nile and South Kordofan, and the displaced and impoverished Blue Nile, Kassala, Gedarif and the Northern States to make room for dams built to bring electricity to urban areas.

Field complaints can no longer be ignored.

The views expressed in this article are those of the author and do not necessarily reflect the editorial position of Al Jazeera.