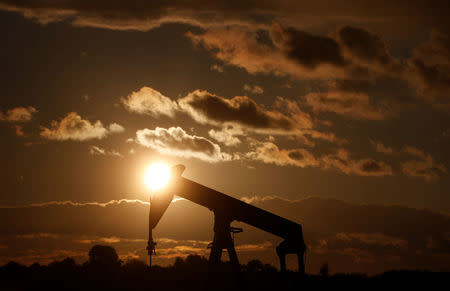 SINGAPORE (Reuters) – Oil prices fell on Monday as US sanctions against Iran's fuel exports softened with derogations that would allow some countries to import oil from Iran, at least temporarily.

Brent has lost more than 16 percent in value since early October, while the WTI has fallen more than 18 percent since then.

This occurred when traders reduced their bullish bets on oil futures to the lowest in a year by the end of October, the fifth consecutive cut during a month in which prices have fallen since July 2016, data showed on Friday .

Prices have been under strain since it became clear that Washington is allowing several countries to continue importing oil from Iran, despite sanctions, which officially began on Monday.

The United States said on Friday that it would temporarily allow eight importers to continue buying Iranian oil when it again imposes sanctions to force Iran to curb its nuclear, missile and regional activities.

So far, Washington has not named the eight, called "jurisdictions", a term that may include Taiwan, which the US does not consider a country.

China, India, South Korea, Turkey, Italy, the United Arab Emirates and Japan were Iran's largest importers of oil, while Taiwan occasionally buys Iranian oil, although it is not a major buyer.

Oil markets have been preparing for sanctions for months.

"Iranian exports and production have been steadily dropping … Iranian exports show a decline of more than 1 million barrels a day (bpd) as of October," said Edward Bell of Emirates NBD.

On the demand side, Bell warned that consumption may be slowing due to an economic slowdown, as seen in a sharp decline in refining profits.

"Decreasing refining margins at a time of low oil prices sends a very telling message to us that demand is performing below expected," he said.

A slowdown in demand would come as production is rising.

Joint output from major world producers – Russia, the United States and Saudi Arabia – rose above 33 million bpd in October, up 10 million bpd since 2010.

Only these three countries serve more than a third of consumption.

In the Middle East, the Abu Dhabi National Oil Company (ADNOC) plans to increase its oil production capacity to 4 million bpd by the end of 2020 and 5 million bpd by 2030, ADNOC said Sunday compared to the current production of just over 3 million bpd.