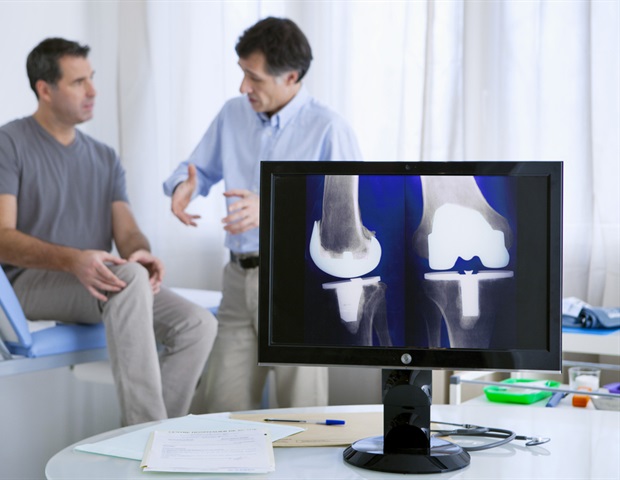 Smart knee implants may soon be a reality thanks to research conducted by a team that includes faculty at Binghamton University at New York State University.

Knee replacement surgery is the most common joint replacement procedure, with the number of surgeries increasing each year. Many of these surgeries are done to replace an old or worn implant. Increasingly, this surgery is being performed for younger and more active patients facing a dilemma. When they undergo surgery, they are expected to remain physically active for their overall health, but this activity may also wear out the new implant. Doctors often do not know if patients are exaggerating until they begin to develop symptoms. At that point, the damage to the implant has already been done. For a young patient, undergoing knee replacement surgery every five or ten years is a difficult task, but finding the perfect balance between activity levels to maintain implant integrity has been equally intimidating.

Researchers decided it was time to create smarter knee implants that could monitor changes in activity as they occurred. Assistant Professor Sherry Towfighian of Binghamton University served as lead principal investigator for the study, which was supported by the National Institutes of Health (NIH).

"We are working on a knee implant that has built-in sensors that can monitor how much pressure is being placed on the implant so doctors can have a clearer understanding of how much activity is negatively affecting the implant," said Towfighian.

The sensors allow doctors to warn patients when a certain movement has become excessive for the implant, so patients can adjust quickly and avoid further damage to the implant. This helps them find the ideal point of activity for each particular patient.

While sensors solved one problem, they brought in another. The researchers did not want to connect the sensors with a battery that may need to be replaced periodically and thus defeat the purpose of an intelligent implant. Instead, they worked on a power collection mechanism that can feed the knee implant of the movement. Wathiq Ibrahim, a postdoc in the Towfighian group, developed a prototype of the power harvester and tested it under a mechanical test machine to examine its output under equivalent body loads.

They used tribo-electric energy, a type of energy that is collected from friction. Once someone walks, the friction of the micro-surfaces coming into contact with each other can be used to feed the load sensors.

Assistant Professor Emre Salman of Stony Brook University designed the circuit and determined that it would need 4.6 microwatts. Preliminary tests have shown that the average person's walk will produce six microwatts of energy, more than enough to feed the sensors. This part of the research was complemented by Assistant Professor Ryan Willing of the University of Western Ontario who worked on implant design and sensor package.

These smart implants will not only give feedback to doctors, but will help researchers in the development of future implants. "The sensors will tell us more about the demands placed on the implants and with that knowledge researchers can begin to further improve the implants," said Towfighian.

Towfighian is hopeful that the combination of activity sensors and a self-powered system will increase the life of knee implants and reduce the need for follow-up surgeries. For young patients who are considering the possibility of knee replacement surgery, this development has the potential to be life changing.