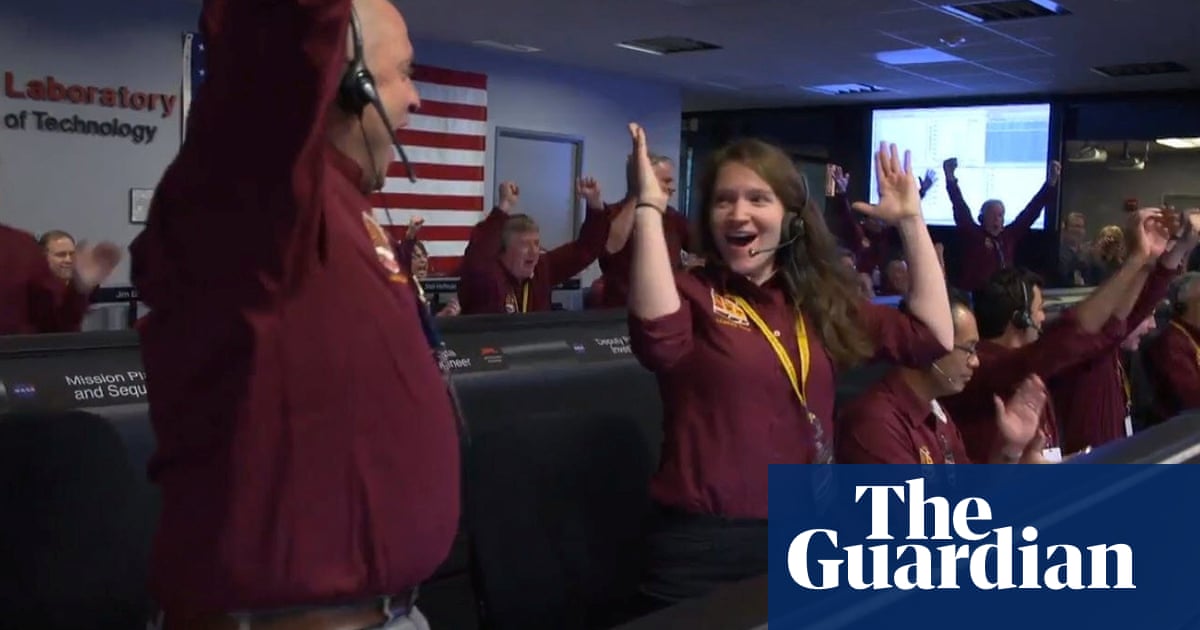 After a seven-month, 300m-mile journey, Nasa's Mars InSight probe has reached its destination and touched down near the planet's equator.

The lander came to rest on the dusty surface shortly before 8PM GMT on Monday after the nail-biting descent that started when the spacecraft slammed into the Martian atmosphere at 12.300mph and ended minutes later with the probe settled on the ground, its thrusters quiet .

Mission scientists cheered, hugged and fist-bumped at Nasa's Jet Propulsion Laboratory in California when the lander beamed home signals of its arrival on the planet. "It was intense; you could feel the emotion, "said Jim Bridenstine, Nasa's administrator. "What a day for Nasa."

InSight's landing spot, the Elysium Planitia, is one of the most boring places on the alien world: a vast, smooth lava plain that the US space agency calls "the biggest parking lot on Mars". But a featureless, and hopefully quiet, landscape is precisely what InSight needs for its mission to map the interior of the planet.

"This is our first opportunity to look deep inside another planet, to look at the structure and find out why it ended up the way it did," said Rain Irshad, the autonomous systems group leader at RAL Space in Oxfordshire, and one of several UK scientists who worked on InSight's instruments.

The $ 814m (£ 633m) lander will draw on a suite of instruments to study the makeup and dimensions of the planet's core, mantle and crust. Armed with that data, scientists hope to learn how Mars – and other rocky worlds – formed at the dawn of the solar system 4.6bn years ago.

Sending a probe to Mars, whether to land, orbit or fly past, is a risky business: only 40% of missions have succeeded. Nasa is the only space agency to have pulled off Mars landing, most recently in 2012 when the Curiosity rover was winched to the surface by a hovering "sky crane". In 2016, the European Space Agency attempted to put its own lander on Mars, but the Schiaparelli probe shut down its retro-rockets too soon and smashed into the ground.

The InSight lander had to play flawlessly to touch down safely. Soon after it hit the thin Martian atmosphere, it released the parachute, then blasted off its heat shield and fired retro-thrusters to slow its descent. Confirmation that InSight survived what Nasa calls "the seven minutes of terror" and touched down was beamed back to Earth via cube satellites that trailed the probe to its destination.

InSight, which stands for Interior Exploration Using Seismic Investigations, Geodesy and Heat Transport, will use three instruments to study Mars. A seismometer deployed by a robot will act as an ear for the ground and listen for tremors produced when subterranean rock faces slip past one another on geological fault lines. These pressure waves bounce around the planet, and can reveal crucial information about its structure.

Mission scientists expect InSight to record anything from a dozen to 100 Marsquakes of magnitude 3.5 or greater over the lander's two-year mission. The seismometer is so sensitive it can detect vibrations smaller than the width of an atom.

"The most important question is whether Mars is seismically active," said Neil Bowles, a planetary scientist at Oxford University, who worked on the spacecraft. "We have indirect evidence for shaking on the surface, for example by looking at boulders rolling down slopes in images from orbit, but InSight will be the first to place the seismometer directly on the surface of Mars.

"Measuring Marsquakes will give information on Mars' internal structure and hopefully reveal more about how the planet formed. Why is Mars smaller and with a lower density than Earth and Venus? It suggests that Mars' formation and evolution was somehow different to Earth's or some process in the early solar system prevented Mars from growing bigger. "

Another instrument, a heat probe, will burrow into the ground and measure the rate at which heat rises up through the planet. In a third experiment, mission scientists will use antennas on the lander to track their position with such precision they can deduce how much Mars wobbles on its axis. The amount of wobble reflects the size of the planet's core and whether it is molten or solid.

Earth's rotating molten iron generates the magnetic field that shields life from harmful radiation, and helps prevent the atmosphere from being stripped away by high energy particles in the solar wind. At some point in its history, Mars lost its magnetic field, and much of its atmosphere, causing temperatures to drop and exposing the surface to intense radiation. InSight may help explain why, said Irshad.

"Are there conditions under the surface that might have meant life went down in order to survive?" She said. "If it retreated beneath the surface, future missions might find it there."