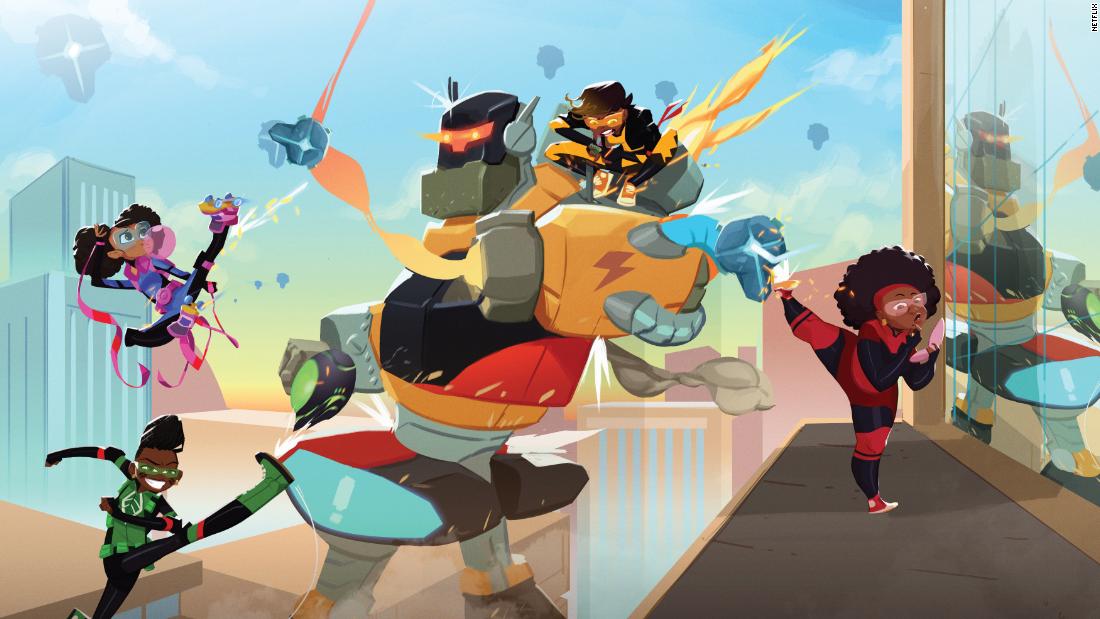 The series is produced by award-winning South African studio Triggerfish Animation and by CAKE's children and family entertainment specialist in London.

Mama K's Team 4 tells the story of four teenagers living in a futuristic version of Lusaka, the capital of Zambia. The girls are recruited by a former secret agent to save the world.

Designed by Cameroonian artist Malcolm Wope, the animation inspired the visuals of hip hop female groups from the 1990s, Netflix said in a statement announcing the agreement.

It was written by the Zambian writer, Malenga Mulendema, who was one of eight winners of the 2015 Triggerfish Story Lab initiative, a talent hunt for African storytellers.

Mulendema says she grew up watching cartoons and wondered why none of the heroes looked like her.

"By creating a superhero show in Lusaka, I hope to introduce to the world four strong African girls who save the day in a fun and crazy way. Most importantly, I want to illustrate that anyone from anywhere can be a superhero." she said in the statement from Netflix.

The Mama K Team 4 commission is not an isolated move from the streaming platform. Since its debut in 2016 in Africa, the company has been investing in original content from the continent.

Netflix drew the attention of the African audience in 2015 when it paid $ 12 million for the worldwide distribution rights to Beast of the Nation, starring award-winning actor Idris Elba, as a warlord leading a group of child soldiers. Country of West Africa.

Last September, Netflix bought its first film, Lionheart, from Nollywood, the second largest film industry in the world in terms of production.

He also acquired the rights to add the Nigerian film "Chief Daddy" to his platform last month.

Netflix, available in all 54 African countries, has recently announced that it is approaching 150 million subscribers.

It is currently facing competition from MultiChoice, a South African cable television company, which is present in 49 African countries through its Africa Magica channel.

Africa to the world

The incursion of the platform into the commissioning of films and animations on the continent generated enthusiasm and analysts believe that is good news for the continent's producers.

Bankole Oluwafemi, who writes about technology in Africa, says Netflix, acquiring content directly from African producers, will give them the budget to market their films to the rest of the world.

"You have an industry that does not have a lot of money to get in. But Netflix enters the African market with a budget that is definitely needed," he told CNN.