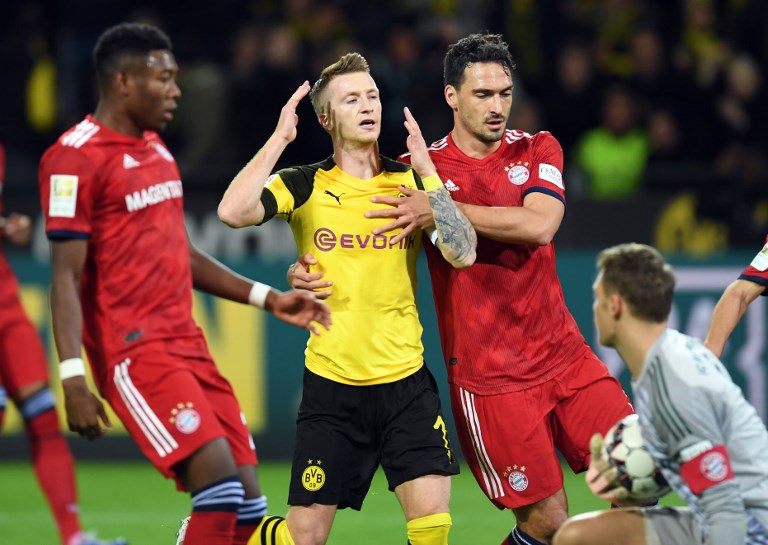 Mats Hummels blamed the illness for his weak performance in Bayern Munich's defeat at Borussia Dortmund in Saturday's Bundesliga clash that left the defending champion seven points behind the table.

"I got sick today," Hummels told reporters after Bayern lost 3-2 to Bundesliga leaders Dortmund despite having twice led at Signal Iduna Park.

Hummels said he started feeling bad on Friday but felt "really bad" before kick-off, but the German international desperately wanted to play for Der Klassiker.

Spanish striker Paco Alcacer came off the bench to score the winning goal of Dortmund 17 minutes from the end as the hosts staged a turnaround, twice tied with goals from Marco Reus to overturn Robert Lewandowski's double for Bayern.

Hummels was replaced by Niklas Suele in the 63rd minute, but not before making two mistakes, both of which led to chances for Dortmund.

Hummels gave the ball to allow Dortmund captain Reus to take a shot that was saved after 10 minutes. He was beaten in the rhythm to present the substitute Alcacer another opening before the Spaniard was approached.

"You could see in both situations that my head was not where it needed to be," admitted Hummels.

"That's why after the second mistake, I said it does not make sense to keep playing.

"On both occasions I was lucky not to have scored.

"The coaches knew, of course. I'm angry with myself that I did not say at the break" I will not leave "- (my vision) was all upset and foggy," added Hummels.

Bayern coach Niko Kovac says he asked Hummels how he felt during the break, with his team leading 1-0 after a strong first-half performance for the visitors.

"He (Hummels) told us at half time, our doctors gave him medicine, things seemed to be fine, so I sent him back," Kovac said, under pressure after three defeats in the last six games.

"If he had said it was not going to work out, I would have taken it off at half-time."

The decision by Hummels, the 2014 World Cup winner who made 69 appearances for Germany not to declare himself improper before, was criticized by Bayern experts and former players Oliver Kahn and Lothar Matthaeus.

"In a game like this, you need eleven warriors physically in perfect condition," Matthaeus told Sky.

"There was a German international Niklas Suele at the bank, so his decision is not really understandable."

In the past, Hummels occasionally blamed team mates for bad performances while playing for Bayern or Germany.

Kahn said he could not understand why Hummels used his illness as an excuse after the defeat.

"You have to ask yourself: what's going on with the players?" Kahn told ZDF on Sunday.

"As a player, I would not have stayed there and told everyone I was sick or something.

"That's not interesting to anyone."