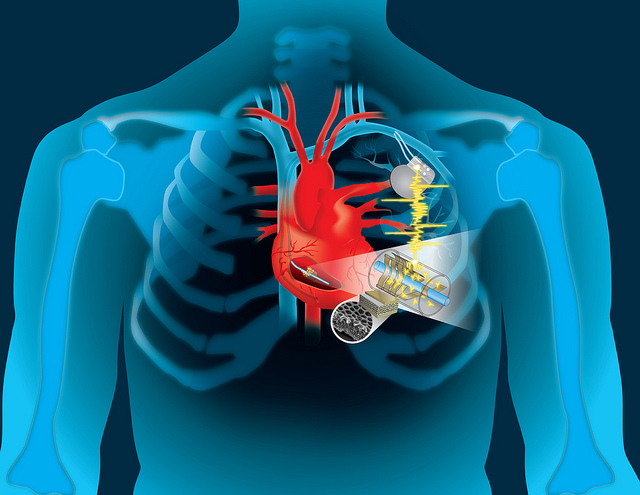 Engineers at Dartmouth College have created a dime-sized device that could allow implanted biomedical devices to be loaded indefinitely using the heart's natural kinetic energy. In a study conducted in the last three years and published in the journal Advanced Materials Technologies in January this year, a piezoelectric implant was combined with a pacemaker to convert heart beats into electricity. Considering the 5-10 year replacement requirement for the medium battery-powered implantable biomedical device, this invention may soon signify a significant reduction in invasive and risky surgeries.

Piezoelectricity is mechanical stress converted into electricity. Pressure, sound waves and other vibrations that come in contact with piezoelectric materials cause the atoms of the materials to move, creating positive and negative charges. In the Dartmouth invention, the mobile cardiac tissue compresses a flexible container with piezoelectric material inside, creating charges that are sent through the lead wire of the pacemaker back to its battery. This continuous loading cycle, in theory, would allow any biomedical implant in which movement was a component of the location of the device to last a patient's lifetime.

Project engineers have two more years of funding from the National Institutes of Health (NIH) to complete a pre-clinical and regulatory approval process, and a commercially available version is expected to be about five years away. The potential for the device has already been recognized by leading players in the biotechnology industry. Andrew Closson, one of the authors of the study, explained in a report on the device: "There is already a lot of express interest from leading medical technology companies …[and we are]… Advancing the entrepreneurial phase of this effort. "

The idea of ​​drawing energy from the heart is not new. A team of University of Illinois researchers demonstrated a proof of concept in 2014 using a flexible piezoelectric patch on anesthetized sheep. After sewing several patches in an ideal orientation in the sheep's heart, the strain produced was considered sufficient to power a standard pacemaker. Other devices that can be powered by this type of technology include cochlear implants and implantable defibrillators.

Implantable electronic medical devices are often seeing improvements in the field of biotechnology and therefore directly relevant to the invention of Dartmouth engineers. In November last year, a study was published demonstrating the effectiveness of a spinal implant used to amplify brain signals. After epidural electrical stimulation was administered to the spinal cord of three paralyzed participants, all of them were able to regain movement in their lower limbs. The piezoelectric functionality in a device like this would be a natural inclusion.

Engineers use heart energy to self-load a bio-implant device