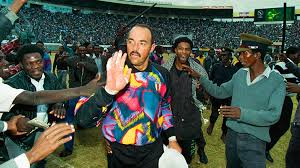 CorrespondingFormer Zimbabwean goalkeeper Bruce Grobbelaar and striker Stewart Shutto Murisa were tied in a musical project that seeks to defend the well-being of people with disabilities.

The project is an initiative of the Light Africa Project, an organization formed by young Zimbabweans living in the country and in the diaspora.

In an interview, Light Africa founder Chanda Dzawo said the initiative came after realizing how some talented musicians living with disabilities were having their careers cut short. He cited Tedious Matsito as an example.

"We decided to start this project to help people living with disabilities from the sale of the single we are producing.

"We are targeting at least 15 people, including football legends, celebrities and even government officials to be part of this musical project.

"We are happy that Stewart Murisa, Bruce Grobbelaar, Munyaradzi Munodawafa and others have agreed to be part of this project. Even people like Ginimbi or anyone who is willing to help is free to attend. Bruce agreed in principle but he asked to see part of the intended beneficiaries first, so we are hoping that his rep Dickson Choto will come back to us, but at this point he is willing, "he said.

Chanda extended an invitation to the ambassador of Harare International Carnival, Genius, & # 39; Ginimbi & # 39; Kadungure and the head of the Zimbabwe Tourism Authority, Karikoga Kaeke, to give voice to the project saying that it is vital to have them on board as the artists to be supported are potential tourism ambassadors. musical talent

A fortnight ago, a poor musician Terrence Green got a free recording deal from the popular Mt Zion Studios after Light Africa posted a video of him on social networks.

"The boy (Green) had no money to record and it touched our hearts and we sent his video on social networks,
"T-Man, producer of Mt Zion, saw the video and offered to record it for free and they've recorded it and we're excited," explained Dzawo.

He praised Murisa and Grobbelaar for agreeing to be part of the project.
Grobbelaar, a former soldier, has no known history of music and his will shows that he was touched by the plight of people living with disabilities.

Munodawafa is a blind musician who began singing at the age of nine and was generous on the radio.