Resistance to antibiotics, one of the greatest health threats of our time, spread its wings across the face of our planet. And now, researchers have detected signs of this in one of the most remote inhabited areas on Earth.

In an effort to find out more about what drives the spread of antibiotic resistance, the researchers turned to soil samples in Svalbard, an archipelago in Norway, in the high Arctic near the North Pole.

Here, the team detected more than you would expect from such a distant location – traces of 131 antibiotic resistant genes (ARGs) responsible for the spread of superbugs. These include the gene blaNDM-1, first detected in urban India at about 8,000 km (or 5,000 miles) from Svalbard.

Scientists believe that this particular gene was possibly transported by feces from migratory birds, other wildlife, and even humans.

The team chose the region of Kongsfjorden in Svalbard as a place of study because it sits on a remote island without agriculture or industry and is so cold here all year long that it is easy to preserve the DNA in the soil. In addition, less than 120 people live on this icy piece of land at any time.

The desire to travel from blaNDM-1 to a distant point from large hospitals and urban civilizations is another sign that combating antibiotic resistance (AR) is a global rather than a local challenge. 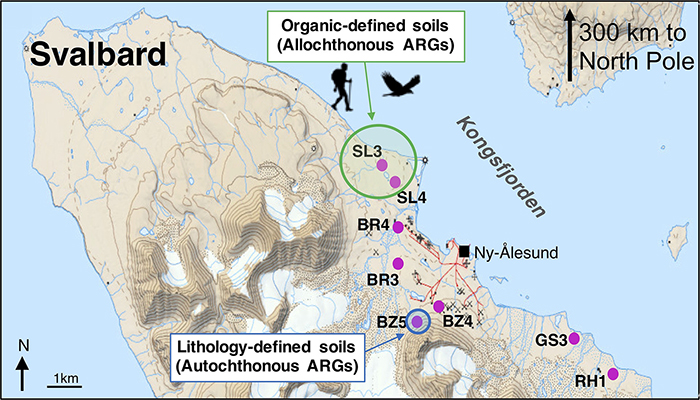 "Polar regions are among the last supposed ecosystems on Earth, providing a platform to characterize the background pre-antibiotic resistance against which we can understand the rates of progression of AR pollution," said one of the researchers, environmental engineer David Graham, of the University of Newcastle. in the United Kingdom.

"But less than three years after the first detection of the blaNDM-1 gene in surface waters of urban India, we are finding them thousands of miles away in an area where there has been minimal human impact."

We know that by encoding an enzyme called NDM-1, the blaNDM-1 gene can help develop resistance to multiple drugs in microorganisms – even "last resort" drugs, such as carbapenems, which we tried when everything else failed.

And as bacteria evolve to fight the best treatments we can deliver for them – evolving from simple, ordinary insects to superbugs – it's already costing thousands of lives each year, according to some estimates.

This situation will only get worse unless we can find ways to make our antibiotics more effective, or develop new varieties of them.

"Through overuse of antibiotics, releases of feces and contamination of drinking water, we have consequently accelerated the rate at which super-bacteria can evolve," says Graham.

"For example, when a new drug is developed, natural bacteria can adapt quickly and become resistant, so very few new drugs are being prepared because it simply is not cost effective to produce them."

Although there is no immediate threat to health in the area, overuse of antibiotics in a clinical setting may not have led to the arrival of blaNDM-1 in such a remote region, which is why scientists are exploring other possibilities.

DNA was extracted from 40 different soil samples collected in the Kongsfjorden region in 2013. The 131 resistance genes detected covered nine different classes of antibiotics, with blaNDM-1 found in 60% of the nuclei.

Researchers describe soil as the "source and sink" of antibiotic resistance, and expect to use the Arctic soils as a basis for measuring resistance and its spread – something that will be difficult with man-made microbial movement.

There is still hope to find and collect samples of more pure and ARG-free soil in those regions. In doing so, scientists want to better understand how resistance to antibiotics develops and grows, and from there to discover better ways to stop it.

For this to happen, the team suggests, we need to carefully analyze waste management, water quality and other human impacts on the environment in order to keep the Arctic environment as pristine as it seems.

"The invasion of areas such as the Arctic reinforces the speed and breadth of antibiotic resistance, confirming that RA solutions should be viewed globally, not just locally," says Graham.

The research was published in International Environment.