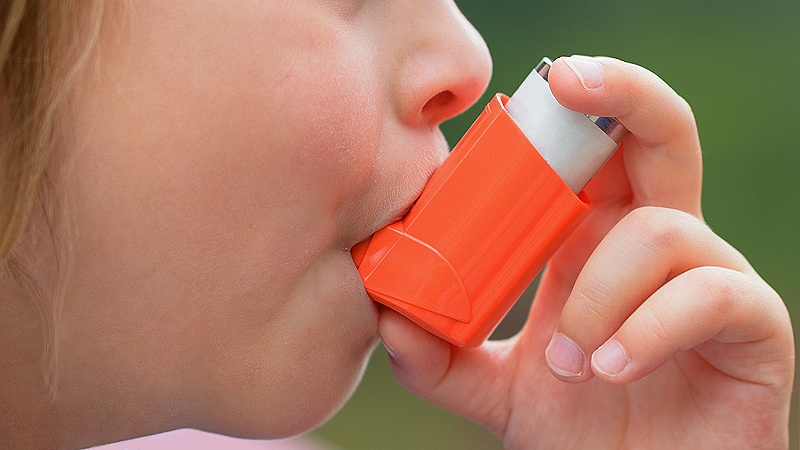 It is estimated that 23% to 27% of new cases of asthma in children are directly caused by obesity, new research indicates.

"In the absence of overweight and obesity, 10% of all pediatric asthma cases in the US could be avoided," write Jason E. Lang, MD, MPH, Division of Allergy and Immunology and Pulmonary Medicine, Duke University School of Medicine, and Hospital and Duke Children's Health Center in Durham, North Carolina, and colleagues.

The results were published online today in Pediatrics.

Obesity has been previously associated with new cases of asthma in adults, and researchers estimate that obesity causes approximately 250,000 new adult cases per year. The present study is the first to measure incidence and risk in a large diverse national pediatric population.

Lang and colleagues used the PEDSnet clinical data search network to compare the incidence of asthma among overweight and / or obese children with healthy children aged 2 to 17 years. They analyzed data from 507,496 children and 19,581,972 encounters that occurred between January 2009 and December 2015. The researchers matched individual children classified as overweight or obese at the 1: 1 ratio with children whose weight was in a healthy range. The children were also matched by demographic characteristics and insurance status. The mean observation period was 4 years.

Incidence was defined as at least two encounters diagnosed with asthma and at least one prescribed asthma controller.

The results are important because there are few preventive measures to reduce childhood asthma, the authors note.

These data suggest that reducing obesity in children "would significantly reduce the public health burden," they write.

In an accompaniment editorial Deepa Rastogi, MBBS, MS, of Montefiore Children's Hospital, Albert Einstein College of Medicine in the Bronx, New York, says the numbers show another reason why such discoveries are so important. She explains that the prevalence of pediatric asthma has remained at around 10% for many years, despite advances in early diagnosis, management and mitigation of environmental factors. At the same time, obesity rates are at almost 20% and increasing among some groups, and these new data show how this could increase rates of pediatric asthma.

"[W]"We are seeing a 5% increase in childhood asthma due to obesity, suggesting that, over time, obesity-induced asthma will become one of the major types of childhood asthma," she said.

Rastogi notes that the strength of the study is that the database, PEDSnet, includes data from eight of America's leading pediatric health systems, allowing a broad view of races, ethnicities and various definitions of asthma.

The combination of children for demographic characteristics and insurance status separated the possible confounding of these variables, she notes.

In light of the findings, Rastogi suggests that doctors measure waist circumference and quantify metabolic abnormalities in the evaluation of pediatric patients with obesity to better identify those at risk of developing pulmonary complications.

"As there are normative values ​​for waist circumference and for the classification of metabolic abnormalities in children, those with evidence of [one or more] of these obesity-related complications should be those actively screened for asthma, "she writes.

Children aged 2 to 17 years were eligible for inclusion in the study if they had a body mass index adjusted for age and sex by at least the 85th percentile and no recorded diagnosis of asthma or wheezing before or during the initial visit in the study period.

The study excluded children using asthma medications without a formal diagnosis and those diagnosed with asthma within 18 months after the initial consultation. Children were also excluded if they had documented cystic fibrosis, ciliary dyskinesia, childhood cancer, inflammatory bowel disease or bronchopulmonary dysplasia.

The study was funded by the Patient Centered Outcomes Research Institute and institutional development funds from the Nemours Children's Hospital and the Nemours Infant Health System.

One author reports serving on the advisory boards of Merck, Sanofi Pasteur and Pfizer, and serves as a consultant to Pfizer, but does not receive funding from these entities.

The other authors of the study and Rastogi did not reveal relevant financial relationships.