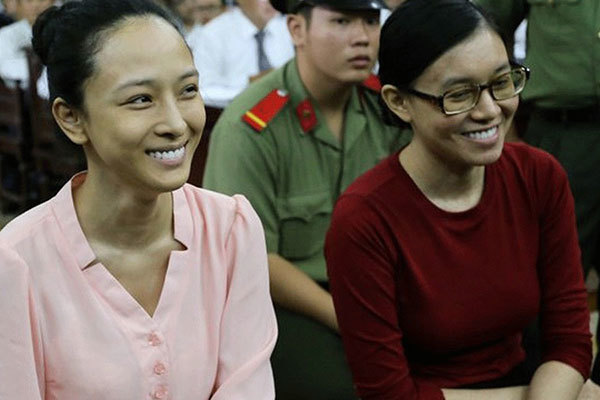 Although Ho Chi Minh City police have returned much evidence, such as telephone, Ipad, money, but did not pay 2.5 billion dong, Nguyen Duc Thuy Dung filed a lawsuit against the police in Ho Chi Minh City.

During the investigation, on October 7, 2015, the CSDT decided to seize items and related documents, including the seizure of 2.5 billion dong and all interest of that amount of their money. Manure.

On January 29, 2019, the Ho Chi Minh City Police suspended the case, suspended the accused and returned many evidence, including: phone, Ipad, money, but did not pay 2.5 billion dong.

Although prior to this, the Ho Chi Minh City Police Department has decided to cancel the decision to handle material evidence and decided to revoke Cao Toan My's 2.5 billion VND (previously seized by Dung) and US Complaints about this recall cases to resolve civil lawsuits in material disputes. Therefore, Mrs. Dung sued the City Police. HCM returns this money

In addition, Nguyen Duc Thuy Dung also asked the court to force the defendant to pay compensation due to late payment of the above amount and expenses incurred in the process of processing the case.

The case of Miss Phuong Nga and her close friend Nguyen Duc Thuy Dung have attracted the attention of the public for a long time.

At the trial in September 2016, Phuong Nga admitted having received VND 16.5 billion from Mr. Cao Toan My, related to the emotional contract for 7 years between the two. Thuy Dung also stated, but later countered.

From these facts, the court returned the files for further investigation.

In the second trial of June 2017, there were many unexpected events when there were a number of mysterious facts that were released, such as: the role of the mysterious woman Nguyen Mai Phuong involved in the case, There was a communion signal from the detention center … From these facts, the court reopened the request to clarify nine key contents of the case and two defendants were released on bail.

Police in Ho Chi Minh City later concluded an investigation to suggest the transfer of charges against the two defendants of "Assassination of property appropriation" to "Stamp of forgery and documents of organization." Phuong Nga acts to use the document "Will" with false seal of the private company Phi Vu Tram Anh to send to the CQĐT.

Ho Chi Minh City Police said the acts of the accused show signs of article 267 of the Criminal Code in 1999 on "forgery of stamps and documents of agencies and organizations", but can be exempt from image liability. according to the Penal Code 2015.

Suspend the accused, suspend the case of Miss Phuong Nga