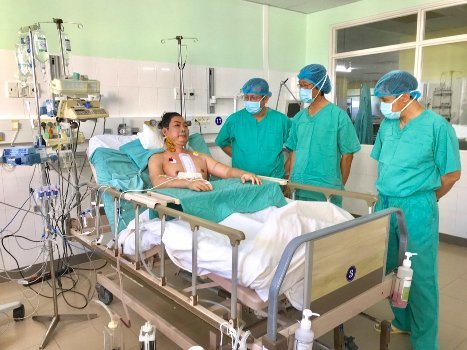 The plane landed 45 minutes late, and the Hue Central Hospital doctor had to wash his heart straight from the car from Da Nang airport to Hue to catch up.

On January 26, Hue Central Hospital received word of a patient with brain death at Viet Duc Hospital, donating organs. Professor Dr. Pham Nhu Hiep, director of Hue Central Hospital sent a team of doctors to Hanoi, carrying a blood sample of patients to assess the compatibility of organs donated with receptors in Hue.

When donor heart outcomes were consistent with the 52-year-old terminal heart failure patient being treated at Hue Central Hospital, doctors performed the removal of organs from the donor's body and transported him by air to the yard. fly Danang.

Landing estimated at 13:50, but the plane arrived 45 minutes late. In order to time the heart transplant, when the plane landed, the doctor's train at Hue Central Hospital took the door to pick up the organ. The distance from Da Nang to Hue is very time consuming, so the heart transporter has to wash the heart directly in the car to bring the heart to Hue.

At 16h40, the heart was successfully transported to the operating room of Hue Central Hospital and immediately inserted into the recipient's chest.

After two hours of transplantation, the heart returned to the recipient's chest. One day later, the patient was removed from the ventilator, all health parameters were good and stable.