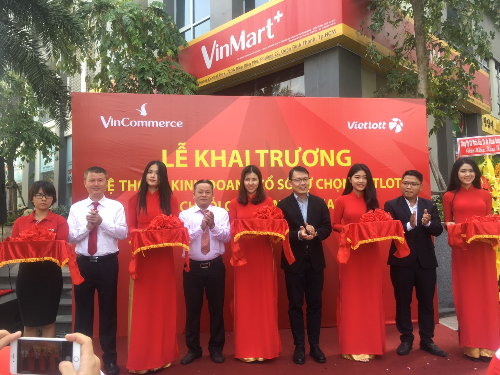 Initially, Vietlott implemented business in 100 VinMart + stores in Hanoi and 100 stores in Ho Chi Minh City. Ho Chi Minh City (List of points of sale: https://www.vietlott.vn/en/choi/diem-ban-hang). In the future, VinMart + stores, as well as other types of Vincommerce stores and supermarkets, will be equipped with Vietlott Self-selected lottery machines according to their ability to meet consumer demand.

Lottery convenience store is a popular selling model in developed countries, but it is a new trend in Vietnam. Vietlott lottery tickets sold in the VinMart + chain of stores bring more convenience to consumers.

Vietlott has affirmed the development momentum in the coming years and has always diversified distribution channels, bringing many opportunities to customers. Meanwhile, VinMart + convenience stores will add a healthy entertainment product to customers as well as other consumer goods and services.

Vietlott was officially present in 49 provinces / cities with thousands of stores bringing joy to millions of customers. VinMart + is a prestigious chain of 1,700 convenient and reliable consumers, a daily shopping destination with thousands of consumer goods for fresh food, pre-processed food to suit the needs of each family. and facilities for modern living.

The cohesion of the two modern brands will bring consumers more services, products and convenience in personal financial expenses, as well as more options for customers when they reach VinMart +.