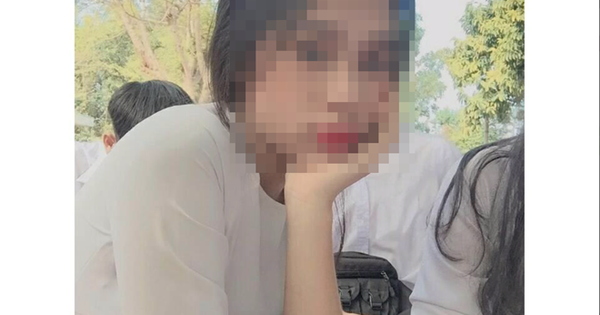 On the afternoon of June 10, the TPT (the girl in Ba Ria-Vung Tau was said to be a boom of millions of GrabFood loaders) and her mother and brother went to the Ho Chi Minh City office to work to confirm the order. goods mentioned above, at the same time want to compensate the driver.

Here, the T. family stated that she is not the order, but her younger brother, 12 years old. To confirm, Grab asked that his brother T. directly perform the operations in the application application and, according to the observation, this young man is quite competent. Concerning the issue of the T. family who wants to make up their money, Grab did not get back and said there was a policy for the driver.

According to the Grab representative, if GrabFood drivers have completed the receipt of food and beverages but customers suddenly cancel the order, if you check the right side of the customers canceling the order, this unit confirms that driver support policies , including reimbursement of the money that the driver has acquired.

If these situations happen, Grab said the driver should immediately inform the operator of the unit, phone 028.71087018 for help. "In the future we will also constantly improve the system to minimize the" blast "situation at the last minute," said Grab representative.

Meanwhile, according to police Xa Bang commune, Chau Duc district (Ba Ria-Vung Tau) – where T.'s family is hosted, although the unit has heard the noisy incident in social networks, has not yet received the request. letters or reflections of girls and relatives related to the incident. Locally, female students "migrate" to assets belonging to policy families, living in the house of gratitude by their grandparents.

Earlier, social network shared dizzyly in the case of a GrabFoood driver was a girl "burned" amount of milk tea of ​​1.2 million. What makes the network boil by the conversation, the customer "boom" answered "innocent" as it is a pastime. 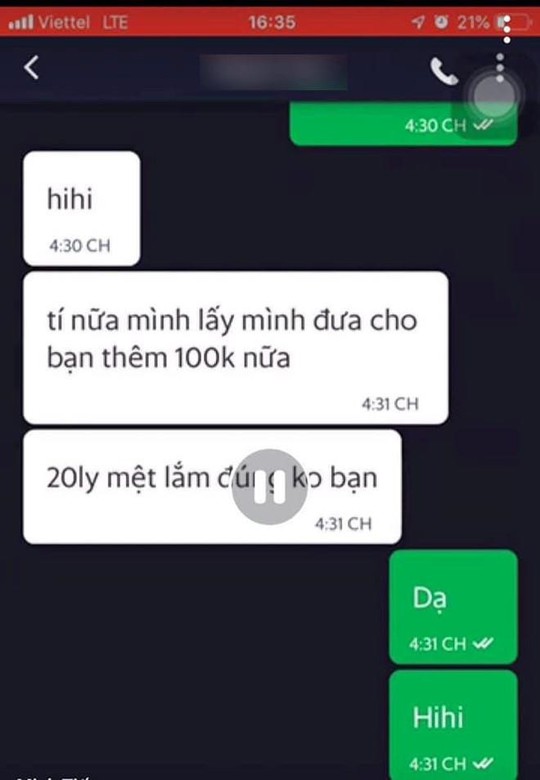 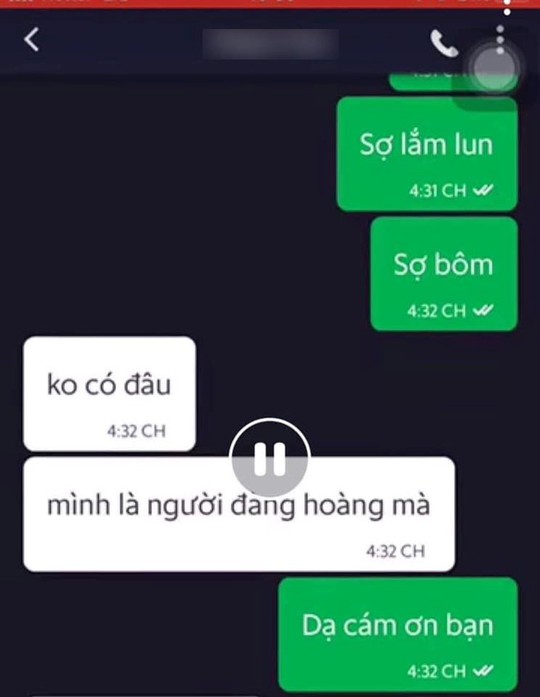 According to the shared story, on June 8, the girl named TPT (student at a continuing education center in Ba Ria – Vung Tau) ordered 20 cups of milk tea through the GrabFood application, worth 1.2. million dong. Orders are of relatively high value, Grab driver, then consider, ask again to confirm, but the customer confirms "I am a decent person." However, when the request was delivered, the guest responded innocently … "Let's just boom." 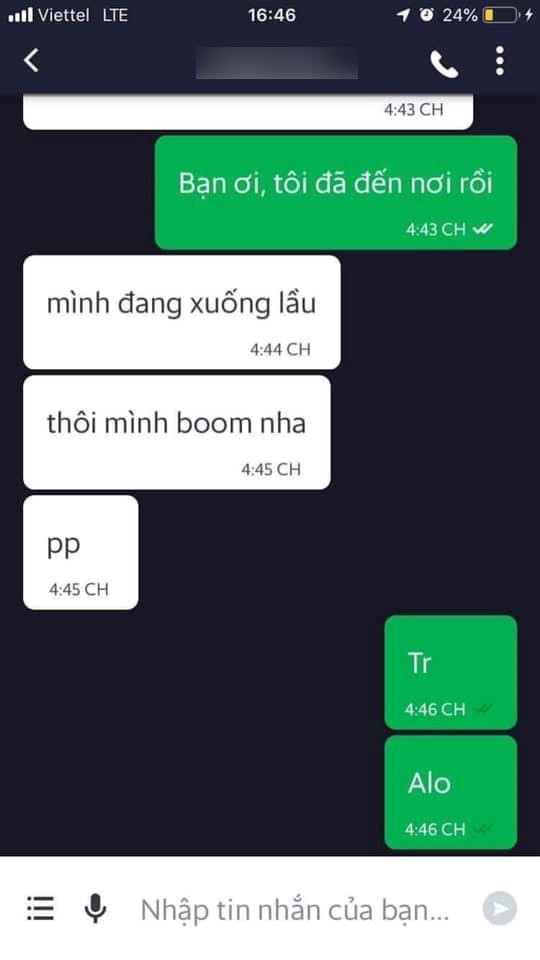 How to respond to "innocent" customers of "boom"

The sender urgently captures the conversation screen and the request was shared on social networks, attracting many interested people and most are outraged by this story.

Netizens quickly found the address of the girl's personal website on fire, competing for "terrorists." After receiving a bunch of "stone bricks", P.T had to temporarily block his personal account and on the night of June 8, his mother spoke with a live video. The father confirmed that his daughter was not the one who ordered and canceled the order, but this unfortunate incident was caused by her 12-year-old son. 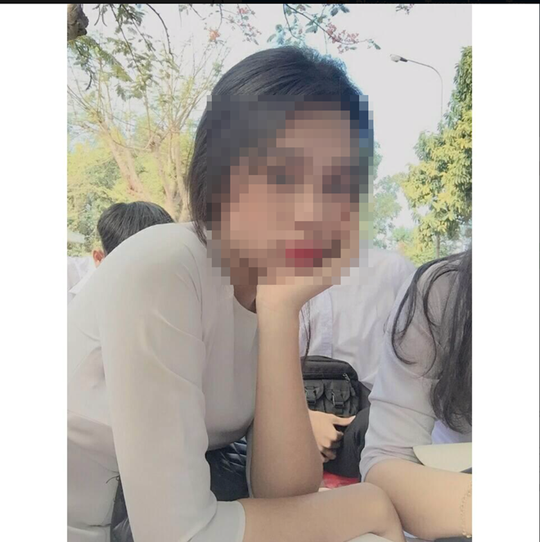 On the morning of June 9, P.T reopened his profile on Facebook and posted an apology explaining that milk tea was not his, but his younger brother.

"I apologize to you, sender, I apologize to everyone for my mistake that led to today's incident. Me and my family called and apologized to you, and we look forward to meeting you to apologize and do the peace, the increasing quantity "- the girl wrote.

T. said about 16 o'clock on June 8, while leaving in Binh Thuan with you, he received a message from his brother asking the confirmation code sent to his phone to create a grab account. Then T. read his brother's confirmation code and about an hour later received a call for tea with milk. "I thought the number was wrong, so I said I did not have a reservation, so I did not get it," explained T. 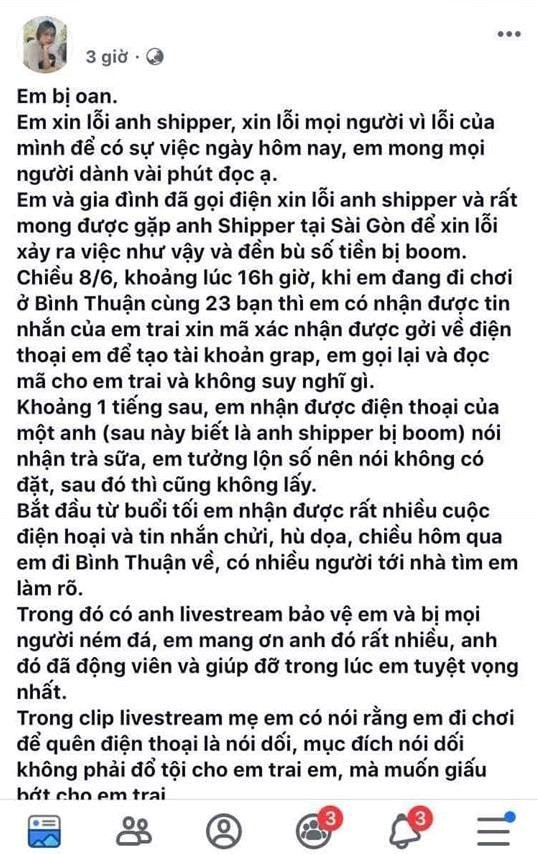 Still according to T., the same day she received many phone calls and messages, cursing and intimidating, and when she returned from Binh Thuan, there were many people coming home to clarify the case. "In the livestream clip my mother said I went out to forget my phone is a lie, the purpose of lying is not to blame my brother, but to hide it for my brother" – T. continued.

Although intelligent, but T. continued to receive "stone bricks" from the network, then she and her family decided to go to Grab headquarters at HCM City to explain and want to compensate the driver.