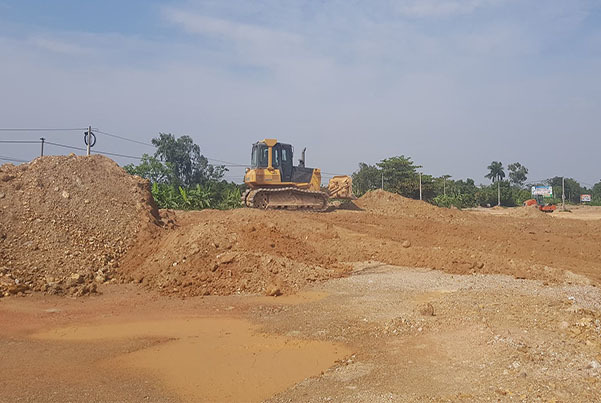 The land use auction project Dam Thung right, commune Ly Nhan, Vinh Tuong district, Vinh Phuc is said to be a mistake in the bidding that the Ministry of construction inspection team discovered, from which "touch of money."

Mr. Nguyen Ngoc Vu, deputy chairman of the Ly Nhan Commune People's Committee, Vinh Tuong district, said that on May 21 the delegation of the Ministry of Construction Inspection announced the inspection decision and requested 5 documents.

5 works include: key cultural house in the village of Ban Mach; stadium of the center of the commune; centralized incinerator; Rural roads and land for the auction of land use rights for Dam Thung.

The Ministry's inspection team came to work only once by announcing the inspection decision and at the same time collected the files of the research projects. Since then, the group has not announced the completion of the commune.

Is the project not objective in the bidding process?

Dam Thung's land-use right auction project by Viet Hung Company Limited was awarded a lack of objectivity, not transparency, and the inspection team had "overheads" after the detection of violations.

Chairman of the commune of Ly Nhan, Mr. Hung Hung Manh reported that this project has a total investment of about 33.8 billion dong, is expected to build and level with a scale of about 2,743 ha, including major items : Area of ​​land with 19,119m2, construction of 2 concrete roads, drainage system, cross-road gutters, drainage of waste water, retaining walls …

The number of households in the land acquisition area for the project was initially 105 households with an area of ​​2,743 ha of agricultural land, after which only 80 families agreed to deliver only 2.24 ha. At present, the People's Committee of the commune completed the stage of compensation and compensation of the place.

Still according to Mr. Manh, this money, although the CPC is the investor, but still lending from the Department of Finance. After the project is completed, it will be auctioned to receive payment and, if there is any surplus, infrastructure works will be built.

According to the survey, in the process of issuing bidding documents, only 3 contractors come to buy include: Hai Thanh Co., Ltd. (in the village Cam Gia, An Tuong commune), Hoang Dan VP construction ceramics limited company ( zone Cau Huong, town of Tho Tang, Viet Hung limited company of a member (in the village of Cao Xa, Cao Dai commune, along the Vinh Tuong district).

In the evaluation report of 2 bidders: "There is no evidence of financial resources provided for the bidding package".

However, on the afternoon of June 14, Ly Nhan commune president said that the bidding, evaluation and selection of contractors were carried out according to the process.

"The commune has no capacity to evaluate contractors and has hired another company to do so. After analyzing and evaluating, the company informed the winning bidder of Viet Hung. In 2012-2013, this company also won the package of rural road construction in the commune, "said Mr. Manh and stated that this is a reputable company.

According to this communist leader, the fact that the Viet Hung company has an authorized capital of 3 billion dongs does not affect the capacity assessment of participating in bundles of bids. For evaluation, it should be based on many aspects such as revenue; facilities, construction equipment and facilities; Bank guarantee …

According to this source, after examining the inspection team's office in the Vinh Tuong People's Committee office and detecting temporarily for investigation, on June 13, the provincial police worked with the District People's Committee and collected to keep documents and records related to the inspection of the delegation to investigate and clarify acts of bribery.

A communist leader in Vinh Tuong district, Vinh Phuc – where the Ministry of Construction Inspection team arrived to work, revealed "price" for the works.