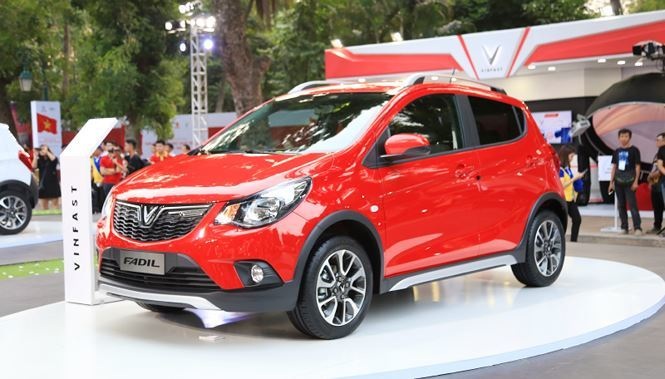 Enter the "game" of small cars

After many years of indifference, at the end of 2018, Toyota Vietnam officially joined the segment of cheap small cars with Wigo models imported completely from Indonesia. This model has the same selling price of cars assembled in the domestic market, from 345 to 405 million VND. With the initial goal of reaching 800 cars / month, by the end of 2018, Toyota reached the plan.

This year, Toyota Vietnam said it will boost sales with this small model to expand its market share. With the advantage of imported brand and car, with competitive price, this is a heavy competitor in the segment.

Realizing the potential market, Honda Vietnam also entered the market. The Brio model is being commissioned by Honda dealers, with an estimated price of less than VND 400 million. According to the plan, at the end of the quarter 1/2019, this model will return home, officially enter the game. With a good-looking exterior design and brand advantages, Honda Brio is certainly a serious competitor, competing equally with Toyota Wigo, Hyundai i10 and Kia Morning.

VinFast company of billionaire Pham Nhat Vuong will send Fadil samples and deliver them to customers in the third quarter of this year. This model has the best Class A segment equipment with 1.4L engine capacity, ABS braking, electronic braking force distribution, rear camera and 6 airbags … In addition, customers can choose features and equipment provided by VinFast, to create a custom vehicle, different from the others. So this is a potential rival in the segment.

Hyundai i10 and Kia Morning also plan to renew in 2019, with changes in the design and adaptation of new features, to increase competitiveness.

In addition, other rivals such as Suzuki and Mitsubishi also have their own plans to gain market share in the small car segment. Suzuki said that in 2019 there will be a special pricing policy for a number of models, including a small Celerio model. Therefore, the Grade A automotive market promises to be very active by 2019.

The small car market is dominated by two Korean brands, Hyundai i10 and Kia Morning, locally assembled. In 2018, Hyundai i10 sold more than 22,068 cars, accounting for 50% of the market, Kia Morning came in second with more than 11,458 cars, representing about 25% market share.

However, the entry of Toyota Wigo in the fourth quarter of 2018 changed the structure of market share. The Hyundai i10 retains sales equivalent to 2017, while the Kia Morning drops almost 3,000 cars. In 2019, with the appearance of Honda Brio and Fadil, there will be many changes.

Waiting for the price race

Sales of small Class A cars in 2018 reached more than 40,000 units. Companies predict that the growth rate of this segment in 2019 will exceed 10%, because people's income increases while the car is cheap, according to the ability of many people to pay. In particular, these models are very suitable for increasingly crowded cities.

Strong competition, car prices will not be able to increase, on the contrary, there are more customer support promotions. Along with this, companies will have to rush to equip new technologies to attract customers. When Toyota Wigo appeared, Hyundai Thanh Cong had to cancel its planned i10 price increase by the end of 2018.

With locally assembled production vehicles, companies said they would increase the localization fee to get government incentives; At the same time, ask the parent company to share to have the most reasonable price.

Mr. Le Ngoc Duc, Managing Director of Hyundai Thanh Cong said: "In order to have reasonable prices, we ask our partners, suppliers of components from abroad to share. increase production ". In the near future, when the Hyundai Thanh Cong opens a new car assembly plant, the location rate is higher, the assembled models will continue to decline.

Domestic cars will have the advantage if the fiscal incentive policy is adopted. Currently, the authorities have proposed exemption from special consumption tax and automotive components produced internally in the amended and supplemented Special Tax on Consumption, which should be submitted to the National Assembly for approval in 2019. If this policy is adopted, assembled cars locally have the opportunity to reduce prices.

Currently, many models of cars manufactured locally have only a location rate of 10 to 20%. According to the calculations, a locally mounted car has a location rate of 20%, at the price of VND 400 million, when applying this policy, there will be a corresponding discount of 10-12%.

In addition to cooperating with banks, promoting auto loans. With cheap cars, customers only need to have 90 million dong in hand, the rest can borrow from banks, 300 million dong, period of 3 years, the monthly payment amount is not great. Therefore, the cheap small car market promises to grow in 2019.