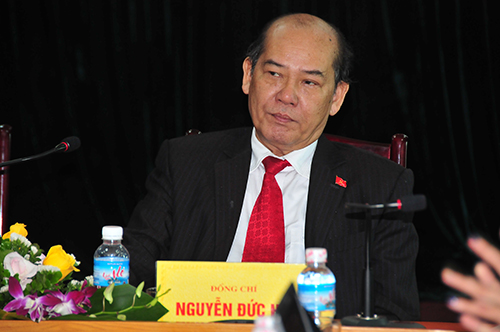 On March 20, the electronic newspaper of the Communist Party of Vietnam held an online exchange "What is the solution to regulate the responsibility of giving life to the examples". Participation in the online session: Mr. Le Manh Hung, Deputy Head of the Central Propaganda Department; Assoc Dr. Nguyen Hong Vinh, former deputy head of the Central Department of Culture and Thought; Nhi Le journalist, deputy editor-in-chief of the communist magazine …

According to Mr. Nguyen Duc Ha, former director of the Organization and Regulation Department, the Central Organizing Committee, if senior officials create great motivation and vice versa, senior officials who act poorly will have tremendous impacts. , reducing confidence in the People's Party.

"Recently, several high-ranking officials violated received the support of the masses in a serious and appropriate manner. In general, setting an example should become self-conscious, regular, routine, and everyday; At the same time, I always have to make sure that I have to do well the things I do to make tomorrow better than today, today is better than yesterday, "Ha said.

Mr. Ha stated that the role of senior officials has an impact across the country and even internationally, so it is always more important to pay special attention to the responsibility to set an example. In particular, according to him, the promulgation of regulations on the responsibility of the example has a deeper meaning than overcoming the concept of possession thinking, dealing with party members with "possession thinking", "the sunset" . period "," enjoying the train ".

In fact, according to Mr. Ha, there were "dredging boats" at the time of "chicken in the barn". Specifically, in the AVG case, it took only 5 days before the 12th Party Congress. Because after the 12th Congress, when many new officials and ministers will be replaced. "Fortunately, this" train "was finally discovered and treated and did not reach the platform," said Ha.

Assoc.Prof.Dr.Nguyen Hong Vinh, former deputy head of the Central Department of Culture and Thought, said that it is necessary to launch a culture of renunciation, ie from the regulation to give an example, but when the members of the suggestions and corrected slowly. , the task does not complete well, make mistakes must resign.