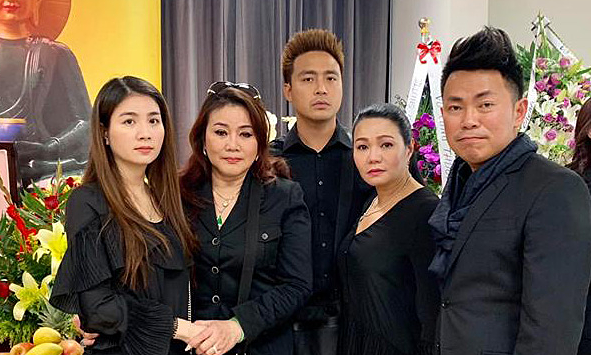 Hong Dao, Ngoc Huyen and many other artists remember the kindness, gentleness and hospitality of Anh Vu's parents.

The visit to the artist of Anh Vu happened at 2 pm on April 6 at the home of An Lac (California, USA). Many friends, colleagues and foreign fans came to see the artist for the last time. On the side of the family, Anh Vu's wife and brother-in-law were on the side to meet all

Singer Leon Vu and Anh Vu's close friends in the US, such as Hoai Tam, Andy Thai and Trizzie Phuong Trinh, were present early to decorate the funeral home and prepare offerings for the artists. Earlier, Leon Vu heard the words of artist Hong Van to print a picture of Mr. Vu wearing a purple jacket with a bright smile as a photo during the visit in the United States. Although Mr. Vu did not perform much abroad, the public heard the news and still visited him. The singer Trizzie Phuong Trinh said that the artist should live a decent life, so she received such a great affection from everyone.

Being present early to dismiss colleagues, said the artist Hong Dao, she used to think people played when they reported that Mr. Vu had died. When she knew it was true, she was shocked that he left so suddenly. The actress said the late artist lived a full life by bringing laughter to the audience, a son of filial piety from his parents. Hong Dao still regretted that two weeks ago he refused an invitation to take a picture with Mr. Vu while he was tired of the long flight.

Ngoc Huyen said, Anh Vu is inferior to her, but insists on being him. For 16 years since she came to the US to settle down, she has not acted with the artist many times but has met her every time. She admired his energy and respected his sense of respect for his parents. She wished he would rest with a smile that was always on her lips as when she was born. Minh Chau has never acted with Anh Vu, but still can not forget the politeness and humor of the deceased artist.

"The Pregnant Woman" Thuy Uyen, organizer of Anh Vu's last show before his death, recalls the artist's charm on stage. Each time he introduced himself, he laughed a lot of smiling laughter and received constant applause from the audience.

Kha Ly – Thanh Duy are the two brothers who participated in the US tour with Anh Vu. The couple arrived early, standing by the altar, to help the family bring incense to the visitors. Kha Ly and Thanh Duy performed with Anh Vu at the Hong Van Drama Theater and toured with Anh Vu in various parts of the world. For Kha Ly, Anh Vu's departure was a huge shock. She still remembers trying to tell the actor to tell his wife not to be too picky about the show because this time it's hard to make money. Unexpectedly Ly Ly was the last word he gave to his husband and wife.

Hoai Tam remembered actor, he met Anh Vu since the artist participated in Gala 2003. The two met for the first time when Ho Tam Tam invited Anh Vu to join the CD. The immortal robberies in 2008. Viet Huong is the one who connects the two people. At that time, Anh Vu was very famous and Hoai Tam still had no name. However, Anh Vu introduced himself very aggressively and enthusiastically told Hoai Tam. After that, they maintained close relationships, often going out to eat, going out together.

Many other foreign artists have also come to see artists such as singer Thu Phuong, actress Ngoc Dang and singer Kha Tu …

The visit ended at 8 pm on April 6 (local time). 23:00 on April 7, Anh Vu's corpse will be taken to a plane to Vietnam. Around 10 am on April 9 (Vietnamese time), the artist's body will return to Tan Son Nhat Airport and then be taken to An Quang Pagoda. Cantor Leon – close friend of the artist Anh Vu – also returned to Vietnam with the artist.

Vu was found dead in the US on April 1. As a comedian and film actor in Ho Chi Minh City, he is known for a number of pieces on the Hong Van stage as Poor children, wife 2, marriage, free... In the field of cinema, he has participated in many films, but the most impressive is his face Girl dancing 1. In addition, Anh Vu also starred in films When a man is pregnant, 365 days to love, she loses her husband… Anh Vu received many awards: The most popular comedy group, favorite actor, Cu Neo Vang, golden smile …