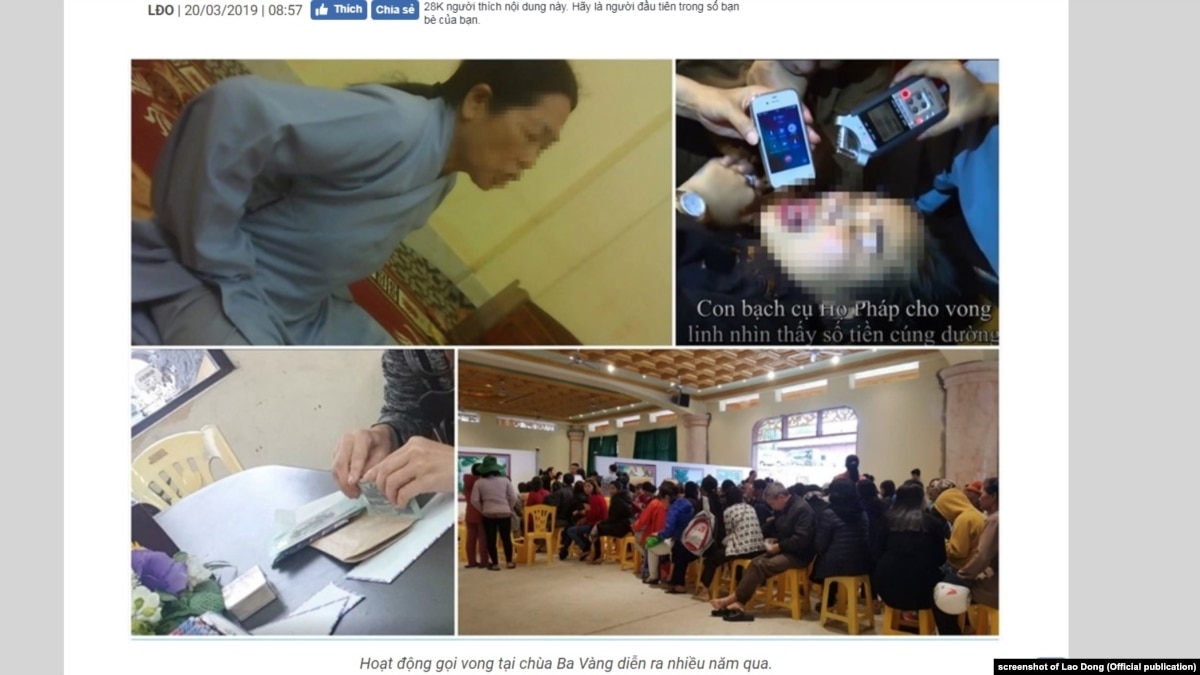 For nearly a week, Vietnamese public opinion has been shaken and there has been much discussion about the lay woman in a temple collecting large sums of money for "petition", "resentment" for those who go to the temple. From the incident brought by the domestic press, many people question whether there is a transformation or corruption on the throne of the Buddhist Church in Vietnam.

The scandal was first reported by the Lao Dong newspaper on March 20 in a series of long-term reports, and then continued to be reported in other media such as Soha, Vietnam Law, VTV, VTC.

The report reports that Pham Thi Yen, a layman of the Ba Vang Pagoda in Quang Ninh Province, often "preached myths" that many sufferers' calamities are now due to the "past lives" lifestyle and "resentment of lemurous spirits ".

Despite many irrational things in the preaching of the 49-year-old laywoman, there are still tens of thousands of people coming to see the yen every year to "back down," "resent," according to the news. Ms. Yen has collected from a few million to billions in each person in exchange for "helping" them by bad luck, disease, good news.

Through research, VOA learned that the work of lay women Pham Thi Yen received the agreement of the abbot of Ba Vang pagoda, whose name was Thich Truc Thai Minh.

According to public sources, Venerable Truc Thai Minh, 52, became abbot of Ba Vang's pagoda in 2007. He urged Buddhists to contribute to the rebuilding and expansion of the temple many times. in 2011. After 3 years, Ba Vang Pagoda of a small wooden pagoda set a record of "the mountain temple with the largest main palace in Vietnam (4,500 m2)".

In Buddhism does not allow people to make sacrifices with the super bridge … More and more superstition in Vietnam causes confusion for people, and for Buddhism, impure people who are cultivating. act in the righteous bowl.

Local news said that the Thai monk Minh once said that "there are spirits, demons following people, causing diseases …". Meanwhile, many monks claim that the theory of "mortal death" is not in Buddhist teachings.

"In Buddhism, people do not allow people to make sacrifices with super bridges. 20 years ago I condemned this. More and more superstition in Vietnam has caused confusion among people, and for Buddhism, it is not clear who is practicing the right way.

VOA has observed many Vietnamese expressing in their social networks that they "shock" and "indignate" what happened in Ba Vang. Local newspapers said that Pham Thi Yen's activities brought "a hundred billion dollar revenue" to the temple.

Writing on the personal page, journalist Hoang Hai Van called the Ba Vang Pagoda incident "a shameless variation of the status of selling and selling Buddha" not only in that temple, but also according to him "happening all over." place ".

Facebookers with more than 92,000 followers follow these questions: "Which agency gives permission to build a temple? Who talked about illegal temple fraud activities?" He emphasized, "These are questions that need to be answered by law enforcement agencies, if they want to protect the transparency of laws, religious policies and protection of fellow Buddhists.

Meanwhile, another veteran journalist, Chu Vinh Hai, has stated his personal opinion that the incident in Ba Vang Pagoda in particular, and in many other temples in Vietnam in general, was caused by The government "politiza" Buddhism.

"The motto-ethnicity-socialism of Buddhism is the source of corruption and transformation of Buddhism," Hai wrote on his personal Facebook page.

For a long time, there were reports that many monks were members of the Communist Party of Vietnam, military or police officers.

Those who cultivate them just follow the Buddha, not the politics or the economy that follows. If you're still a politician, or a party, you're a fake monk.

VOA is unable to verify this information independently. However, in March 2018, when Venerable Thich Thanh Sam passed away, Nhan Dan of the party that posted the monk's biography said that he had a 50-year-old party badge.

Journalist Zhou Yonghai analyzed the story that, during the Vietnam War before 1975, "the Communists had tried to induce southern Buddhism to stay on their side, and had some success." Then Mr. Hai commented that "now the government of Hanoi is managing to manipulate the Buddhist Church of Vietnam."

Hai said that once manipulated this way, "corruption, the transformation of the Buddhist Church of Vietnam is inevitable." And according to this veteran journalist, corruption, it "will never stop."

Articles and opinions generated by Mr. Hoang Hai Van and Chu Vinh Hai are hundreds of others sharing through social networks, with thousands of "love, like" reactions.

"They cultivate only the Buddha, not the politics or the economic things that follow. If you're still a politician, or a party, you're a fake monk. He must follow the Buddha as the Buddha of the mass, not the Buddha of any country. "

The monk added that "Buddha is in the heart" and those who built great pagodas "only blessed the Buddhists."

Prior to articles and public comments on the scandal at Ba Vang Pagoda, at a press conference on March 25, Lieutenant General Luong Tam Quang, a spokesman for the Ministry of Public Security, said Quang provincial authorities. Ninh, the Central Buddhist Church of Vietnam and the Government Religious Affairs Committee called for a verification of the case. Lt. Gen. Quang added that "during the inspection, if there are any signs of a violation of the law, it will be treated in accordance with the regulations."

Vietnam has less than 10 percent of the Buddhist population, according to the 2009 Population and Housing Census. However, there are other estimates that suggest that about 45-50 million people in Vietnam are "credible." threshold of Buddhism. "