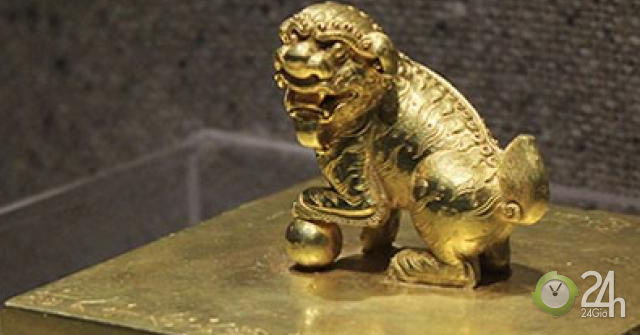 For almost half a century, few people knew of the existence of gold and jade

In the 143 years of existence, the Nguyen have always regarded the seal as a symbol of supreme power, a national treasure.

The seal is made of gold and silver called kim bao. An Indian made of jade is called jade. One of the imperial treasures is extremely valuable, especially the gold seal "Dai Viet Quoc Nguyen Lord eternal security" is recognized as a national treasure in 2016, currently on display at the National History Museum.

Going framed in gold, square face, unicorn button. The back pressed and engraved two lines of Chinese characters: "Statistics of the Golden Cross, the Six Thousand and Thousand and Eight and Eight, Vinh Thinh, of nine years." The face is engraved with 9 characters "Dai Viet Quoc Nguyen Lord Forever told me" (to persuade Lord Nguyen forever of Dai Viet). According to Dr. Pham Quoc Quan, a member of the Heritage Council of Vietnam, this seal was made by Lord Nguyen Phuc Chu (1675-1725), the 6th Lord of the 9 Nguyen Lords, to the cast. Historical experts say the reason for the seal is that there are no dragons, but they are replaced by unicorns, because the Le are still the owners of the world (from 1427 to 1789), although they are in the hands of Trinh. This is the period in which the country divided 2, taking the Gianh River as a boundary. The north of the Gianh River is Dang Ngoai, according to the Mesopotamian regime, with the King's Palace and the Lord's Palace. South of the Gianh River, under Lord Nguyen's command, to make the south a territory, outside the control of the central government, was always a counterweight to the Trinh Lord in Dang Ngoai.

When Doan Cong Cong Nguyen Hoang entered the town of Thuan Hoa, King Le gave him the title of Secretary General of the Army, giving his seal, private seal. The seal of the governor general was used to build the highest texts of the time of Dang Trong. After 5 years of Nguyen Lord, from Nguyen Hoang to Nguyen Phuc Tran, establishing the kingdom still uses the seal of King Le Ban.

In the time of Lord Nguyen Phuc Chu, he sent a person to cast the seal "Dai Viet Quoc Nguyen Lord always said". The last Nguyen Lords took that as national security.

In 1775, the final division of the two houses of Trinh-Nguyen broke out, ending more than 200 years separating Dai Viet into two parts of Dang Trong and Dang Ngoai. Double face with the army of Trinh and the army of Tay Son, Dinh Vuong Nguyen Phuc Thuan had to bring his family to the south. He brought with him the gold seal, later leaving Nguyen Vuong Nguyen Phuc Anh (ie, Nguyen Anh). In 1777, Nguyen Anh escaped the pursuit of Tay Son, had to flee everywhere to start the 25-year war to rebuild the clan's heritage. In those 25 years, the gold seal according to Nguyen Anh wandered by many mutants as they crossed the sea to Thailand, often lost and found again. In 1802, when Nguyen Anh took the throne to take the name of Gia Long, this metal became the official throne. This is also the national tradition of the Nguyen kings afterwards.

Going Jade "Dai Nam inherited the eternal destiny of the nation" was recognized as a national treasure of Phase 6 (2017). This is the most important jewel in the Nguyen dynasty's treasure collection, presently preserved in the National History Museum.

According to historical records, in the year of Thieu Tri 6 (1846), the villagers presented King Thieu Tri a very large jewel – the product of the Ngoc mountain in Hoa Dien, Quang Nam. The king rejoiced and sent his private army to become jade, a year later, was made. This is "the great south that inherits the eternal life of the billion". 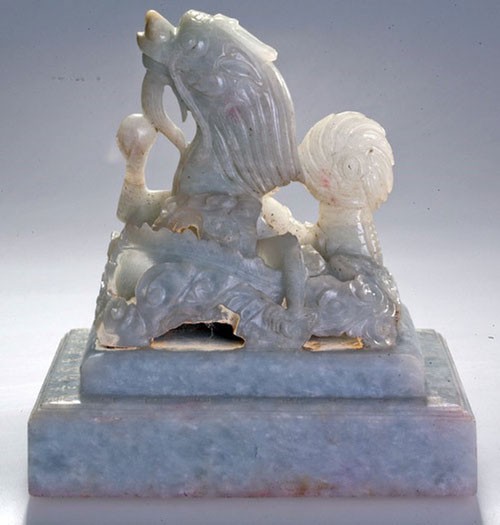 This is the third jewel of King Thieu Tri (ex-god of chi-chi and emperor Nam Nam Hoang), also the jewel of the largest and most precious collection of the Nguyen dynasty. The king himself made a great ceremony to record the word on this pearl-shaped face, which was used not only in the annual sacrifice ceremony of the Nam Giao Dan (capital of Hue), but also used to act upon the fate of vassals, things given to people. The fact that "Dai Nam passed away with the tradition of transmitting nationalism" was used in the international diplomatic document, and the committee issued a letter to foreign countries was considered significant and its importance went beyond internality. , reaching international standards, at the same time demonstrating independent national ideology and national pride.

When the August Revolution was successful, Ngoc billion were received by the Minister of Labor on behalf of the Provisional Revolutionary Government of the Dong Dong Ngu Tien Office of Pham Khac Hoe. After the abdication of Bao Dai King, this treasure was transferred to Hanoi.

In December 1946, when the entire country resisted the French colonialists, the treasures were taken to be preserved and stored in the 5th Division. After the victory of Dien Bien Phu in 1954, they were taken to the Ministry of Finance to be administered. and in 1959, delivered to the Museum of Vietnam History (current National History Museum). Of the 24 artifacts and artifacts that have just been decided by the government as national treasures of 2017, there are 3 objects …