When the huge bell has just launched the resistance boom, people in the area fear that the enemy will destroy the soggy bell soaked in the lake. It is the ancient bell in Co Le Pagoda, town of Le Co, district of Truc Ninh, Nam Dinh province.

In addition to the unique architecture, the Co Le Pagoda also preserves the second largest bell in Vietnam, after the largest bell of the Bai Dinh Pagoda (Ninh Binh). .

The bell in Co Le Pagoda is called Dai Hong Chung, by the most venerable Thich The Long cast in 1936. The bell weighs 9000 kg, height 4.2 m, diameter 2.2 m, wall thickness 8 cm. The mouth of the bell with lotus motifs, body with floral motifs, rivers and some letters in grapes. People, the region's Buddhists, contributed money to launch the bell. 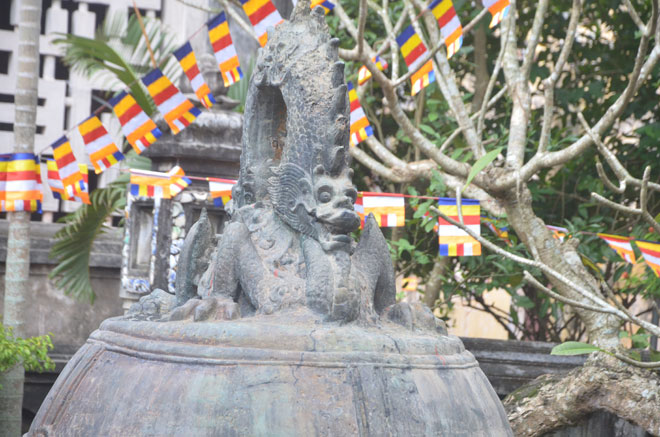 The bell is designed in the shape of a dragon

Co Le Le Pagoda said that when they cooked the bronze casting bell, many people would take out the ring, the gold dissolved in it. When the giant bell has just launched the resistance boom, people in the area fearing that the invaders will destroy the soaked bell in the lake. In 1954, the new bell was lifted and placed on the pedestal for visitors to worship.

"For so many reasons since then, the giant bell was placed in the middle of the lake without moving anywhere or bringing it to use. However, it is said that when General Dai Hong Chung, Nam Dinh province and some neighboring areas will hear the bell, "the abbot of Co Le Pagoda shared.

Nguyen O Anh, head of the Department of Culture and Information of Co Le city, Truc Ninh district, said that in 2005, Buddhists paid 400 million for a new nine-ton bell hanging from the belfry. in Co Le Pagoda. However, the new bell was not as good as the bells released in 1936.

Co Le Temple is the most famous ancient temple of Nam Dinh. The pagoda was built from the Ly dynasty (12th century) on a square land, with about 10 acres of land, beautiful scenery, surrounded by small rivers and lakes. 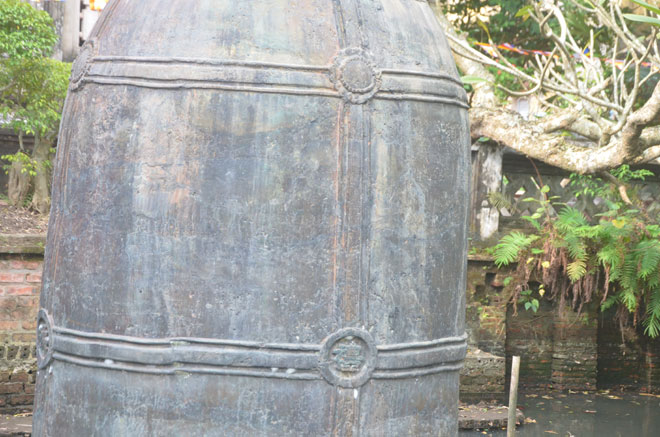 The body of the bell with floral motifs, rivers and some letters in Confucianism

The sacred temple outside the Buddha, also worshiped a saint who is Zen master Nguyen Minh Khong, who healed King Ly Than Tong escape the dangerous disease. Initially, the pagoda was made of wood, in ancient architecture, but temple time was seriously demoted.

In 1902, monk Pham Quang Tuyen as the abbot restored and repaired the temple in the form of good, architectural words "The most beautiful castle" with architectural elements such as the Catholic church. Later, the temple was restored many times and created a large architectural complex like today. The temple is classified as "National Cultural History" in the Ministry of Culture, Sports and Tourism in 1988. Location of the bell near the temple of the general under Hai Ba Trung.