Along with the proposed sentence for the defendants, the VKS representative also proposed dealing with the giants.

the two former deputy ministers of the Ministry of Public Security, Phan Van Anh Vu (dance of the "aluminum") and co-criminals, in addition to proposing the sentence against the defendants, the representative of the Prosecutor's Office (VKS) also suggested the fortune 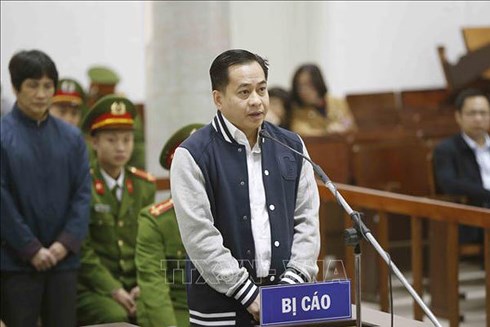 According to the representative of the Supreme People's Committee, the offense of Phan Van Anh Vu and his accomplices violated seven houses, real estate and real estate projects with a total area of ​​6,723.87m2 and 26,759.9m2 of land. total value of more than 2.517 billion VND; needs to be revoked for the State.

For the real estate sector in 129 Pasteur, Ho Chi Minh City, the VKS representative proposed that the Ministry of Public Security be responsible for coordinating with the HCM Municipal Committee the report to the Prime Minister to propose a method of recovery.

For housing in 15 Thi Sach, Ho Chi Minh City, VKS representative proposed delivering the Ho Chi Minh City People's Committee to ensure no loss of state property while at the same time securing legitimate rights and interests for those who have related.

For the amount of illicit profits of Phan Van Anh Vu, the state fund should be confiscated.

The VKS representative proposed to continue implementing work orders to ensure the execution of the judgment. Because of the amount of money Phan Van Anh Vu illegally earns more than 5 billion dong, according to the VKS representative, he is confiscated. For the amount of more than VND 1 billion seized by "Aluminum" Vu also need to be temporarily seized to ensure the enforcement of judgment.

Earlier, in response to an interview with a lawyer, Phan Van Anh Vu presented: In his heart, the accused wanted to hand over all seven properties, but there were difficulties when there were projects of cooperation or tenancy accused.

There are two projects, at 319 Le Duan and the coastal area of ​​Da Nang, which the accused did not use. The defendant agrees to deliver these two unused assets. Whatever project the accused has done, the defendant will continue. Self-defended at morning trial 29-1 after being questioned by VKS a sentence of 14-15 years in prison, the defendant Phan Van Anh Vu ("aluminum dance") …