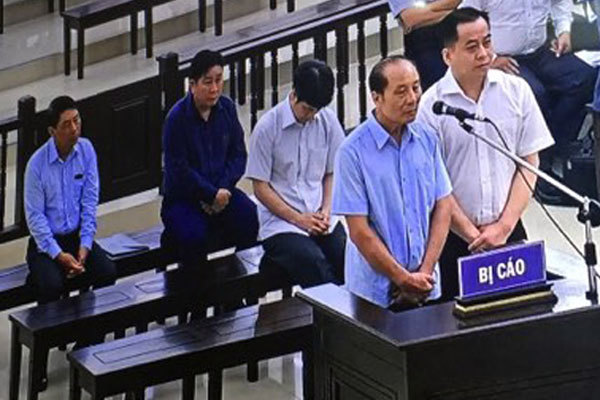 Today, the trial of the defendant Phan Van Anh Vu (ie "aluminum" Vu) and two former deputy minister of Public Security and other defendants continue with the interrogation.

According to the first instance trial, land in 129 Pasteur, Ho Chi Minh City includes more than 1,490 square meters of homes, 2,264 square meters of land administered and used by the General Department 4, Ministry of Public Security as a foreign guest house.

On April 30, 2015, Vu "aluminum" as the chairman of the Nova Northern South 79 Company (New Company) signed a report to present to the leadership of the Ministry of Public Security, General Department 4 to buy land and house No. 129 Pasteur .

May 28, 2015, the accused Bui Van Thanh (former Deputy Minister of Public Security) signed a report to report to the Prime Minister permission to transfer the land use rights and land properties of the No. 129 Pasteur House to New Company to serve the professional work of the Security sector Public. . Then the government agreed.

In January 2016, General Department 4, Ministry of Public Security and Nova Company signed a main contract for the transfer of homes No. 129 Pasteur to more than VND 294 billion.

Responding to the questioning in court, Vu "aluminum" said his sale of the property was due to Nova's economic difficulties and the accused report Tuan and Bach.

Being confronted in the court, both Tuan and Bach confirmed that they were not denounced.

Facing many questions from the Interrogation Panel questions about the sale of assets 129 Paster contrary to the regulations, Phan Van Anh Vu replied: "Defendant does not remember."

Present in court, Thai Bao Anh, a Peak View representative, said the company appealed the lower court's verdict because it said that if the first-class judgment on repossession were enforced, it will not work.

Because, according to the provisions of the Land Law, there are three cases in which the State performs the land reclamation, all three cases are owned by the owner Paster 129.

The Panel said that the Court summoned Truong Thi Kim Soan and Truong Thi Sang, who had transferred Peak View's shares to another unit, but neither was present nor received a reason for absence

The Panel questioned – has Peak View been transferred 100% to another company, does Peak View still have the appeal status of the sentence?

In the morning of the same day, the panel also spent time questioning the "aluminum dance" and people concerned about the houses, real estate land, the project has a favorable position in Da Nang and Ho Chi Minh City. The HCM that Vu was accused of taking advantage of the name of a front-line company to be hired to transfer these properties is not by auction, contrary to state regulations.

Responding to the court questioning about the errors in these projects, Phan Van Anh Vu said, many of the things he has had oral reports to the accused Tuan and Bach. Faced with the dance "Aluminum", two former police officers denied having been denounced by Vu.

This afternoon, the appeal trial of Phan Van Anh Vu (ie "aluminum" Vu) and the two former deputy minister of Public Security continue with the interrogation.