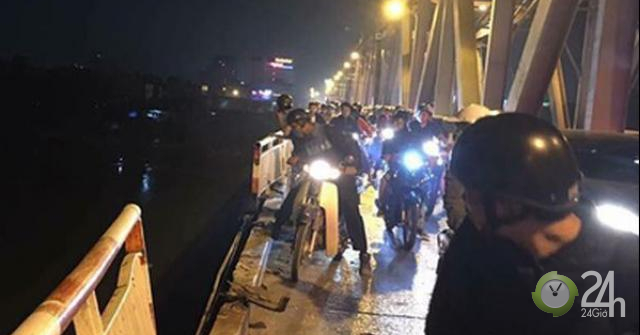 The scene where the car hit the river

According to some witnesses, more than 7 pm on November 3, a car on the Chuong Duong bridge from the Long Bien district to the center of Hanoi. When it reached bridge no. 19 in Long Bien District, this car lost control, hit a couple of meters of lanterns and collided with the Red River, 5 meters from broken bridge 19 broken into the river.

Functional forces blocked the outer band toward the center of Hanoi; The 5-meter handrail from bridge 19 broke and fell into the river. Two rescue vehicles of the FPC and CNCH are present in this area. In addition, functional forces also regulate a river search. On the morning of November 4, the task force lifted and carried the corpse of two people in a wagon through the railing of the Chuong Duong Bridge (Hanoi) to Hong after hours of searching.

After receiving information about the incident, President Nguyen Duc Chung, directed the deputy chairman of the town's People's Committee – Mr. Nguyen Van Suu straight through the scene to direct the rescue and rescue. Field records show that both were female and relatively young.

Allow cars to get on the car tracks – is it legal?

According to the Transport Engineering Consultant Corporation, the Chuong Duong bridge crosses the Red River on national highway 1A at km 170 + 200, linking the Hoan Kiem district to the Long Bien district and a gateway to traffic. the life force of Hanoi. The length of the bridge is 1,230m, including 21 spans: 11 spans; 10 pulses in which 7 spans in Hoan Kiem and Long Bien in 3 spans. Load: H30 The bridge is divided into four tracks that run in two ways. The motorcycle track is 1.5 m wide. Two lanes of cars pass halfway between the bridges. The bridge was built on 10/10/1983, put into use on 6/30/1985 and repaired since 2002. 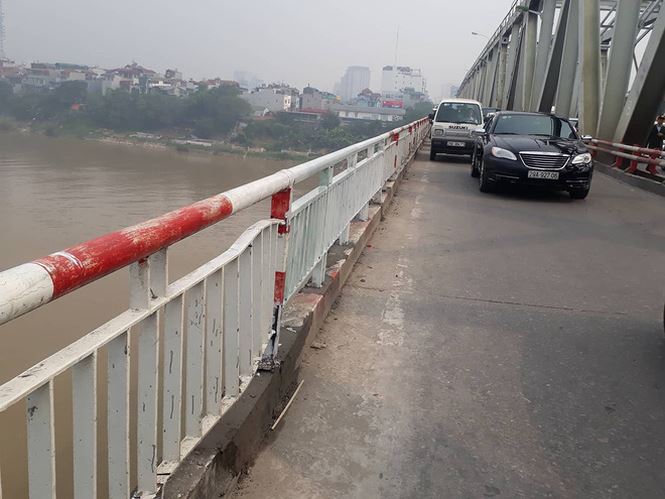 The channel at the accident site has been redone

As can be seen, according to the design of "chicken wings" on the side of the bridge Chuong Duong only for motorcycles, road surface and iron rail system (comb) was built here only to ensure safe circulation motorcycles. It is improper for the car between and the handrail system to be unsecured in the event of a traffic collision with a car.

Speaking with Tien Phong PTO about the function and design of the two wings of chicken wings at the Chuong Duong Bridge on November 4, both representatives of the Ministry of Transport (bridge building units) and traffic police teams to ensure traffic in the bridge. Chuong Duong claimed that only two lanes in the middle for cars, while the track for the two wings only for motorcycles.

Representatives of CSGT No.1 of the Hanoi Traffic Police (ensuring traffic on the Chuong Duong Bridge) said that in the years before the 1990, Chuong Duong Bridge was organized traffic according to the project. Thus, the track of the two wings only for motorcycles; After the time above, the CSGT Team No.1 and local teams received the traffic organization plan of the city of Hanoi for both cars entering the motorcycle lane.

Evaluation on the distribution of streams, CSGT No. 1 representatives said, the flow is to reduce the load to the bridge of two middle lanes in front of the increasing high density of cars, reduce the prolonged congestion. However, this also makes it difficult to regulate, ensuring traffic on the bridge. Due to the narrow surface of the vehicle, mixed traffic between motorbikes and cars, the collision between these two types of vehicles often occurs and the Mercedes 5-seater crash occurred on 3/11 at night as an example. typical.

According to CSGT representative No.1, the Chuong Duong Bridge is being managed on the traffic side by the two CSGT teams on the Hanoi People's Committee, which is the CSGT No.1 team and the CSGT No.5 team . falling on the river occurred on part of the Long Bien District Bridge by the CSGT No.5 team.

Bui Danh Lien, vice president of the Hanoi Transport Association, said before the red river by car in the city center only Chuong Duong bridge to the bridge bridge two wings are held to both cars Traveling with motorcycles is due to the pressure of the traffic. However, when this area has more Vinh Tuy, Thanh Tri bridges, this should be considered and adjusted accordingly. "The design is used correctly designed not only to ensure longevity but also to ensure the safety of people and means of transport," Lien said. PV from 4/11 morning, on the bridge Chuong Duong, the edge of the concrete to keep the bark peeling shelling, break many hidden dangers …