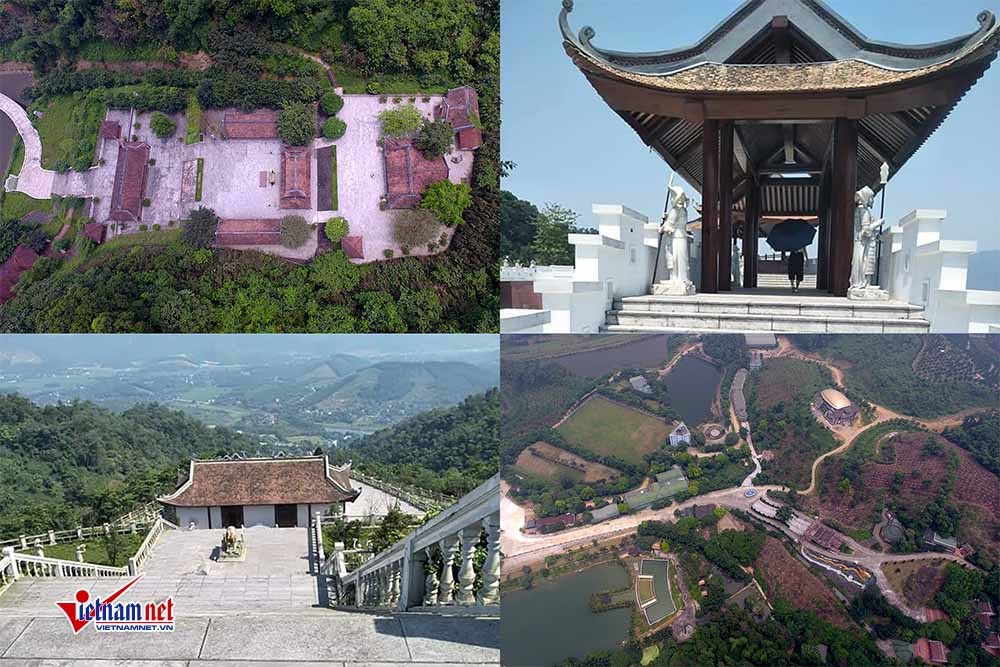 The spiritual tourist complex is built immensely on forest lands in the commune of Yen Trung (Thach That district, Hanoi). All these populations are awaiting approval.

The project of the Thac Bac – Suoi Sao tourist area, with hundreds of hectares, is located in the commune of Yen Trung.

The project was initially licensed in 2002, when it was not separated from Hoa Binh province, invested by the KOVA joint venture company. The scale of stage 1 is 59.2 ha. The project has been completed and commissioned and uses phase 1 as of June 2007.

In 2008, KOVA reported and recorded the expansion of the project with an additional scale of about 200 hectares.

On July 1, 2008, the Hoa Binh Provincial People's Committee decided to approve the detailed planning task on the 1/500 scale of the Suoi Sao Waterfall Resort project, with a total area of ​​233 ha in two communes of Yen Trung and Yen Binh . .

However, implementing the policy of adjusting the administrative boundaries of the city of Hanoi and some related provinces, the projects after the merger with the Capital will have to stop implementation to ensure compliance with the Construction Plan. General, Hoa Lac general urban planning and other relevant specialized plans.

On March 21, 2017, the Hanoi City People Committee decided to approve the investment policy of Suoi San Waterfall project in the communes of Yen Trung and Yen Binh in the district of Thach That.

The scale of the tourist area is about 233 hectares, of which 59.2 hectares of land have been completed and put into use since 2007, basically remain unchanged, only adjust and adjust locally to ensure harmony with the surrounding landscape. infrastructure coupling; 25.9 ha of land for resort hotel construction, eco-rest low-rise houses …; 147.9 ha of afforestation land to explore the forest environment for ecotourism.

On May 19, 2018, Thach That District People's Committee coordinated with the KOVA Company to organize a conference to gather views of agencies, organizations and representatives of the population community for detailed planning tasks at the rate of 1/500 projects.

The main objective of this project is to conserve forests, nature, develop ecotourism, regional socioeconomic development and the Thach That district.

While awaiting approval, the owner hastily constructed many works on forest land. The image recorded above shows that the area of ​​hundreds of acres is being divided into many areas, building many solid buildings.

It is easy to see that it is a complex of spiritual temples and pagodas built on a large scale, and so on. If there is no sign "The Silver Waterfall – Suoi Sao" at the entrance, it is easy to confuse this with a true spiritual area.

According to the local population, before this project was built, there were no ancient temples and monuments. All the temples and spiritualities mentioned above are completely built by the investor.

As the illegal construction is reflected by the people, the tourist area of ​​Thac Bac – Suoi Sao is closed to explore, improve security and protection work.

Request to maintain the status quo

Method of implementation, investors receive the transfer of use rights in accordance with the Land Law and conduct procedures for land allocation and land lease, in accordance with current regulations of the law and the city. The remaining area (about 147.9ha) remains the purpose of using forest land, not building works; families continue to manage and use.

Investors agree with families and individuals who are managing the use of forests and forest land to exploit the forest environment for ecotourism, without implementing procedures for land reclamation and land lease; This land area is not within the scope of land for project implementation.

In order to have a basis for consideration, the Municipal Committee of the Planning and Investment Department is responsible for coordinating with relevant departments and agencies and KOVA Company to synthesize all the work that investors have done, the legal basis to continue done.

At the same time, review the scope of land borders to implement the project to ensure a stable forest area managed and used by ethnic minority families; clearly report the content during the project research process.

Tens of thousands of square meters of protective forest areas in Soc Son district (Hanoi) were erected to build homes and resorts.