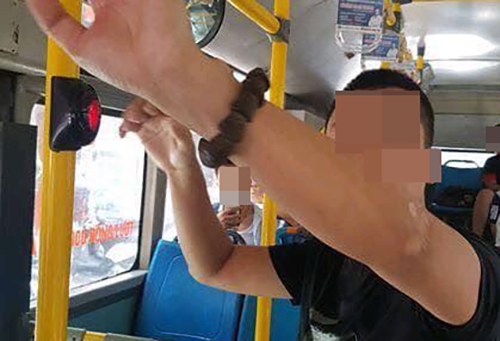 Male passengers around 40 years of age have unkind behavior in public places, making the girls sit next to them, screaming in terror.

12:30 on June 21, on bus number 01 from Yen Nghia to Gia Lam (Hanoi), the 40-year-old man was close to a high school girl, then masturbated. His actions made the girls scream in fear.

The bus driver stopped outside the Hang Ma ward police station in Hoan Kiem district to report the incident. The police took the man to the office.

On June 22, Hang Ma ward police said they were arresting the man. "He did it to satisfy himself and not to the girl next to him. We are verifying that it is a sexual act," said a Hang Ma police officer.

Lawyer Dang Van Cuong said that people who are at least 18 years of age who have committed sexual and offensive behavior to victims under 16 to satisfy sexual needs … will show signs of crime. Umbrella under 16 years old According to article 146 of the Criminal Code 2015. If acts of lust are not intended for sexual intercourse or are not intended to perform other sexual acts, the offender will be sentenced to between six months and three years in prison.

If the victim is over 16 years of age, the man may be subject to administrative penalties of up to VND 300,000 under paragraph 1, article 5 of Decree 167/2013 on behavior "with gestures, harsh words, provocation, provocations." insulting honor and dignity of others. "