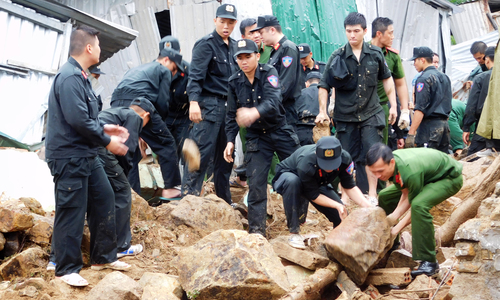 On the morning of November 18, Dinh Thi Sang, in the village of Nui in the village of Thanh Phat, Phuoc Dong (town of Nha Trang), was soaked after relatives fled the ruined house. Her voice trembled, her eyes glittering as she imagined the house collapsing before her eyes. "When it was raining, it was dark outside, and I heard the water from the crevice on the roof, so I ran to find something to stop it," she recalled.

Not to avoid the rain, she heard a loud groan. In a moment, the house of his family's fourth home collapsed. She was lucky to escape, but her four-month-old grandson and grandson were trapped inside. She panicked for help from her neighbors. At that time, the neighboring houses also collapsed. Fortunately, some of them escaped and turned the stones to take the son-in-law and the grandchildren.

Mrs. Morning suddenly decided to hear the voice again. It was the cry for help from Mr. and Mrs. Chin, who lived nearby. The cry for help was interrupted when the water flow rose with everything. "His house was barely visible, we searched for a long time, but we could not find them," she said.

Hamlet is a spontaneous residential development in Nha Trang with about 300 residences, most of which are marine. Living poor, precarious, most people build temporary homes next to Mount Hon. This is always the focus of flood prevention. People are accustomed to the roof storms, but they have never witnessed the rapid and increasing landslide.

The roads along the mountain slope, the day often help people travel, then turn into falls in the heavy rain that frightened them. Hours after heavy rains and mountain slides, Nui Mountain has become a sprawling stretch of beach with broken furniture, furniture, bricks and tiles. Under the rubble, many people were buried, four died, the body was left to the village cultural house waiting for burials. Some victims have not yet been found.

Pham Thi Hoa, a resident of Thanh Phat village, said such flooding never happened. Last year, when typhoon 12 (Damrey) landed at Khanh Hoa, where she lived only the speed of the fallen tree or house. "Now the house collapsed, luck was still happy," she exhaled and said, as the floods flooded the house, everyone in the family were afraid, but did not dare to leave. Just pray "blessing of heaven and earth," then be saved.

Meanwhile, Dinh Ngoc Duong, a resident of the commune of Phuoc Dong, did not stop suddenly because of the speed of the mountain. "Everything went very fast," he said. Standing in the corner of the house, he saw three people, two women playing in the flood, and then their hands on the rope behind the temple waiting to be saved. "It was raining storms, storms and winds with landslides, so no one dared save them." Fortunately, they were back in time, "he recalls. 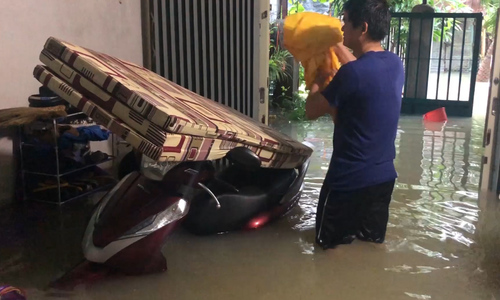 People say when the landslide and water overflow into the house.

Police dig by hand to find the victim

Colonel Nguyen Xuan Canh, head of the Khanh Hoa Fire and Rescue Police Department, said hundreds of 113 militants, police and military personnel were searching for survivors and bodies of victims in ruins. landslide in Nha Trang.

According to Senior Landscape, a series of collapsed houses, mud and mountain stones fell massively, making finding victims extremely difficult. Motor vehicles, large excavator inaccessible, many rescues forced to dig by hand. "We have to turn every stone to find someone," he said, and said authorities had to zigzag to rescue the victims in the hope of surviving.

According to the Disaster Control Board of Khanh Hoa, at least 12 people died of landslides in Nha Trang. Two cases in Vinh Truong, two in Vinh Tho, five in Phuoc Dong and three in Vinh Hoa.

Heavy rains caused many roads in the city of Nha Trang to be partially flooded, some paralyzed lines. On November 18, the water began to decrease, some streets of Nha Trang were normal.

According to Nguyen Van Dan, director of the Khanh Hoa Department of Transportation, 1,500 cubic meters of rock and soil on the mountain hit Cu Hin Pass, causing the Nha Trang stoppage at Cam Ranh Airport. "The force is trying to overcome, waited 19/11, this area is new," said Dan, and said, National Highway 1A normal traffic.

On Highway 27, on the way from Khanh Le, from Nha Trang to Da Lat, there are hundreds of cubic meters of rocks and dirt falling on the road, making travel difficult on the road.

Due to the impact of typhoon Toraji, followed by tropical depression from 17/11 to 18/11, the Central South and Southwest high with heavy rains, popular 80-150 mm. Some places like Cam Ranh (Khanh Hoa) 175 mm, city of Nha Trang (Khanh Hoa) 370 mm, causing many places flooded.

According to the weather agency, rain will fall rapidly on the Central South Plateau and the south-central coast (Khanh Hoa, Ninh Thuan and Binh Thuan), while heavy rainfall in the south will last all day on Monday. / 11.

On Wednesday, November 21, a new storm will enter the southern South China Sea, at the same time as a strong monsoon occurs in the northeast of the country. The combination of the two weather patterns is likely to cause huge rains in central and southern central Vietnam.