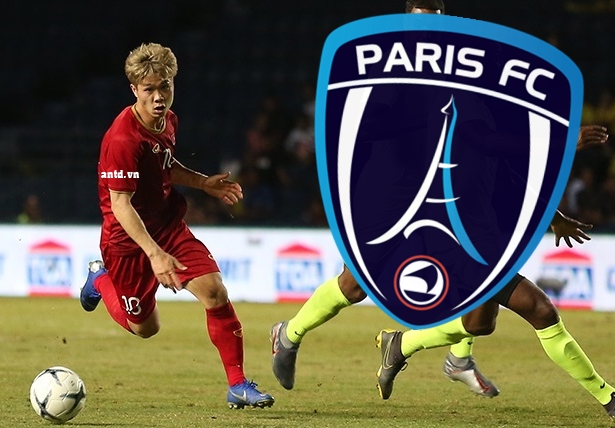 After returning to Vietnam from the 2019 King's Cup, the tournament that Vietnam won in the vice-lead, Cong Phuong is having a few days off at home before leaving for France to try to work at Paris FC on June 15 to 15-7. Rescue the contract with Incheon United, Cong Phuong expects to perform better the first time he arrives in Europe and is retained by the team in the French capital.

Cong Phuong made a third trip abroad, but was the first in Europe

According to Goal, Paris FC is the club that once was considered the largest, has the largest fan base in the capital of the hexagonal country. The team was founded in 1969, before "a house" with the current and powerful team of Paris Saint-Germain, before separating because of misunderstandings about identity issues.

The Paris FC after the split managed to keep all the players of the first team, as well as the shipyard of the Royal Park. Meanwhile, the PSG had to go down to play in the Third Division and start from scratch with the young players.

However, after the fluctuations of the season, Paris FC competed more and more and had to be demoted in 1974. At the same time, the PSG won the ranking and gradually matured with the right steps to become a powerful club like today. Later, Prince Park Park also belonged to PSG while Paris FC played for Charléty.

In the last season of 2018/19, Paris FC played well and finished in 4th place with 65 points after 38 rounds. They failed to win tickets for Ligue 1, but lost to RC Lens in the play-off. However, this team did not diminish the ambition to contribute to Ligue 1 as quickly as possible.

Cong Phuong's striker for Paris FC is Guillaume Graechen, former coach of the advanced training academy Hoang Anh Gia Lai JMG. "Giom" teacher believes that this test trip is not only useful for Cong Phuong individual, but also for the future of Vietnamese football, when the door to Europe began to open.

After two previous trips abroad, joining Mito Hollyhock (Japan) and Incheon United (South Korea), this is expected to be the most interesting, but also the most difficult, journey that Cong Phuong will have to go through . However, this is the time when this striker will have to learn how to grow, to find the light for his career among the capital of light.