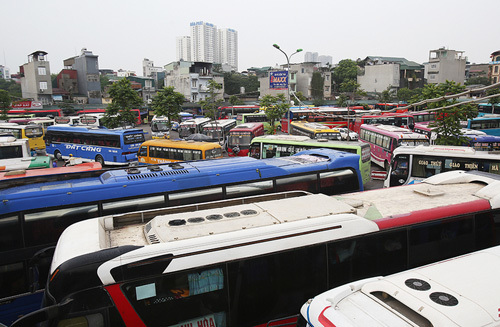 Failing to meet 70% of the number of entries, many cars were "cut" by the Hanoi Department of Transportation.

The Hanoi Department of Transportation has just asked the Joint Bus Company of Hanoi to refuse to serve a month with more than 100 cars. The reason is that these cars register to run a fixed route, but they do not realize 70% of the approved trips.

On May 17, Mr. Nguyen Anh Toan, director of the Joint Stock Company of Hanoi Bus Terminal (My Dinh Road Management Unit, Giap Bat, Gia Lam) said that in essence these buses stopped working, will not dock for months, so refusing to serve or cut is just a formality and a text.

Toan explained that "because there are many motorcycles registering a line, supply exceeds demand".

According to statistics from the Joint Stock Company of the Hanoi Bus Terminal, during the two peak months (12/2018 and 1/2019), the Giap Bat Road Station has 66 transport units with more than 100 vehicles registered with the number of trips below 70% specified. Of these, almost 30 transportation units were inactive for months.

At the Nuoc Ngam bus station, the situation of abandoned garages is more common. In two months of peak, this bus station has 266 transport routes of more than 100 inactive enterprises. Normally, My Dinh International Joint Stock Company has dozens of registered vehicles, but does not operate, does not operate passenger transport; Hoang Son Trading and Transport Co., Ltd runs the Ngam – Minh Loc route to leave the pier of 9/2018 …

Many companies, after moving to Nuoc Ngam Wharf, had serious business operations. From the place full of guests, after relocating each vehicle, there will be only 2-3 passengers. Due to the absence of customers, many vehicles operate moderately or catch passengers along the road, causing traffic clutter and disorder.

In addition to refusing to service more than 100 vehicles, the Hanoi Department of Transportation also called on transportation departments in other provinces and cities to remove badges with hundreds of vehicles from various transportation units; guide relevant departments to monitor the journey to detect vehicles deliberately operating improperly, stopping, returning passengers, loading and unloading goods in violation of regulations for the recovery of badges.