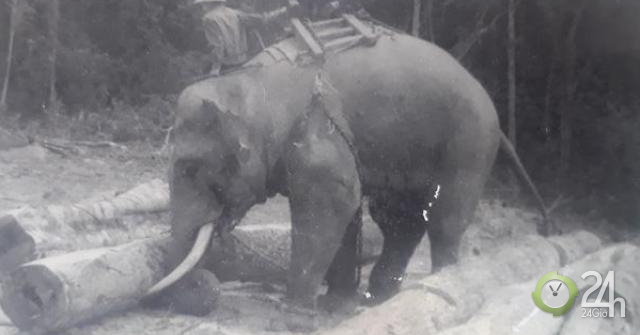 This rare death sentence of animals belongs to the elephant who was promoted to the post of second lieutenant named Bac Noi, which took place in 1982, in the border commune of Kim Thuy, district of Le Thuy (Quang Binh). Around the "life and career" of this particular elephant are exciting stories, few people know. Currently in Truong Son Forest Enterprise (Quang Binh), there is still an elephant specialized in logging, people assume that it is a descendant of Bac Noi

Phong second lieutenant after the campaign of Dien Bien Phu

In the team of Doan 559 (Army of Truong Son), in the early years of establishment, there was a special soldier, the elephant "Lieutenant" named Bac Noi. Bac Noi was promoted to the post of "second lieutenant" because of his remarkable accomplishments in the service of the Dien Bien Phu Campaign. Completing the mission to transport the battlefield, Bac Noi was transferred to serve the pulp production at Ba Roi Forest Enterprise, located in the commune of Kim Thuy, Le Thuy district, belonging to the Long Dai Forestry Union Company. But then Bac Noi had to receive a "death sentence" for "breaking the law."

On the journey to learn about Bac Noi, unfortunately, the original record of this young elephant was not maintained completely due to many reasons. According to information from the General Museum of Quang Binh, there is now only one photo of Bac Noi, captured by the author of Dinh Luong in 1973 and a small incomplete information.

The town of Lang Ho, Kim Thuy commune, Le Thuy district is located on the western side of Ho Chi Minh Road, during years of resistance against the US Army, was selected by Group 559 (Truong Son Army) to establish the advanced command post in the early days. up.

The ancient village of Ho Vuong is 80 years old this year, but it is still healthy and lucid. He met us at his stilt house in the village of Lang Ho, right next to Ho Chi Minh West. According to the history of the village patriarch, Bac Noi was brought to the village of Lang Ho from the end of 1959 by a manager of Thanh Hoa. "He heard the authorities say," Comrade "Bac Noi used to join the Dien Bien Phu Campaign, and made many notable victories, so he was promoted to the rank of second lieutenant," recalls old Ho Vuong.

According to the ancient village of Ho Vuong, Bac Noi was present in the opening days of the Ho Chi Minh Road, there was no reason not to count the stature of this elephant "lieutenant". On that day, Ho Chi Minh Road was the only way to walk, motor vehicles could not move, Bac Noi took part in paving the way, burying the needs for ammunition, ammunition and weapons for the Tri-Thien battlefield. "Bac Noi was made up of hundreds of people. Every time I go on a trip with Bac Noi, the best thing is that I do not have to break through because Bac Noi went ahead and did all the work" – said the old man from the village of Ho Vuong. In addition to the name of Bac Noi, on returning to fight in Group 559, Bac Noi also has another name of "Voi Nga Lieutenant" and Bac Khun. These are two names that the people of Van Kieu affectionately give Bac Noi. Mr. Ho Vai (72 years old) in the village of Ho Rum liked: The reason why people called Bac Noi "Lieutenant Voi Ngoi" because he had two large and long prey; "Silver Khun" is because it is very khun (intelligent, intelligent), saying that understanding, empathy and sharing as people.

Sentence of death "sentence" is drenched with tears

In 1967, when the rudimentary transportation method was no longer effective, Bac Noi was transferred to Ba Riep Forest Enterprise to continue to carry out many important tasks, such as logging for production, building bridges, and paving the way. …

Mr. Nguyen Van Loc, an officer of Ba Rieng SFE, was appointed to administer the Bac Noi statue from his transfer until 1971, reminding: "For 4 years of administration, I have never used a hammer, by Bac Noi. "It's like reading my mind, understanding what a statue needs to do only through the eyes." In early 1971, Mr. Loc moved to work and Bac Noi passed through the hands of a few other statues. Truong Dinh Da was assigned to administer Bac Noi until he was "executed" in early 1982.

Mr. Truong Dinh Da's house is located next to Road 11, right on the Ba Riep SFE. In 9 years of taking on Bac Noi, Da said, he never considered Bac Noi an animal, but always treated him as a friend. Like the people we met, Mr. Da always praised Bac Noi.

Mr. Da and his contemporaries at Ba Riep Forest Enterprise took us to a vacant lot by the stream just below the Co Do subway, about a kilometer from Mr. Da's house. This is where the wing was 37 years ago, Bac Noi was left behind after the death sentence.

Preparing incense, flowers, rice, sugar, sincere incense to pray for Bac Noi, Mr. Da could not hold back the tears. Mr. Da said: In early 1982, Bac Noi suddenly went mad, accused, difficult to protect, constantly devastated and persecuted workers, causing hundreds of people in Ba Riep Forest Enterprise to live in a troubling situation. At the peak, Bac Noi destroyed many SFE vehicles and machines and killed two people. There is no other way, forest leaders must report to the highest level and send a document to the former Forestry Ministry asking for Bac Noi's death penalty.

Stone recalled, "That afternoon Bac and I left the forest after a hard day's work. I tied Bac Noi to the tree as usual and went back to the store to get food for her. I was shocked when I did not see Bac Noi, part of the iron chain was broken and left at the base of the tree. On the way to find some workers in a panic, it is noted that Bac Noi ran into the forest, on the way to find people and cars as he ran ferociously.I followed the direction of all the instructors, coming to see Bac Noi at the side of a stream.I said, not as usual, he roared toward me.seeing that it was no good, I ran along the edge of the forest to report the incident to the head of the forestry company.

According to Mr. Da, after that, Bac Noi did not go to the green forest, but continued to wander through the forest of Ba Ro Forest Enterprise, finding workers and equipment devastating. Bac Noi's "crazy" behavior caused two deaths and nearly a dozen logging machines in the forest factory were damaged. Often Mr. Stone silently followed Bac Noi in the hope of persuading him to "turn his attention" but failed.

The day of Ba Riep Forestry Enterprise received Bac Noi's death decision of the highest levels, Mr. Da lost its members. The day the team ran Bac Noi on the way to do the task, he did not dare to follow, not out of fear, but he did not want to witness the painful scene that happened to a friend of his. Later, he heard people telling, 10 SFE gunmen with bullets full of ammunition simultaneously opened fire when they found Bac Noi wandering in the area near the creek just below the Red Flag underground. Wearing a trap that ran through all the mountains and forests, the forest elephant named Jun passed his wounds, exhausted at the border.