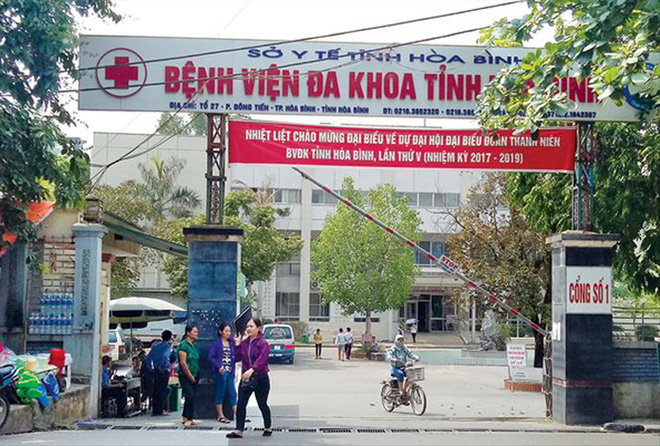 Signs of correction of documents and papers

On November 26, the CSIP of the Hoa Binh Police Department concluded the investigation into the case of "Lack of responsibility causing serious consequences", "Unintentional homicide", related to hemodialysis. The fatalities occurred at Hoa Binh General Hospital (BVDK) in Hoa Binh Province on 5/29/2017. The CSIT proposed that the People's Procuratorate of Hoa Binh Province sue seven defendants with two criminal groups. In particular, Bui Manh Quoc and Hoang Cong Luong were prosecuted for the crime of "unintentionally killing people."

Hoa Binh Police said that as Deputy Director of the Hospital in charge of Medical Devices and Materials Division, Mr. Hoang Dinh Khieu violated the hospital's management regulations; Lack of verification and incentive to implement responsibilities assigned to leaders, staff of the Department of Materials in the supervision and repair of RO2 water treatment equipment; We do not inspect and closely supervise the delivery of the RO2 water treatment system after repairing the medical equipment and materials department and the artificial kidneys.

As the active head of the intensive care unit, Khieu was able to allow the dialysis unit to use the RO2 water treatment system after repairing it arbitrarily without being checked and delivered. Mr. Khieu clearly know the repair and maintenance plan of the RO2 water filtration system, but do not coordinate with the department head of material to verify …

According to the investigating body, after the incident of May 29, 1977, at the session of the Department of Positive Rehabilitation, Mr. Khieu asked people to complete the book and then added Dinh Tien Cong to record. Talk about designating Hoang Cong Luong to take care of mono-kidney. Both Mr. Khieu and Mr. Tran completed the dossiers in accordance with administrative procedures to submit to the investigation agencies, not for the purpose of harming any person or personal interests. In addition, the investigative agency identified several paper documents showing signs of recovery after the incident.

The investigators also determined that Mr. Truong Quy Duong – Director of Hoa Binh Hospital, signed Decision 175 establishing the blood dialysis unit under the Department of Positive Rehabilitation when no specific regulations were put into operation. Although it is not safe enough conditions.

From the period of 2015 to 2017, Mr. Duong did not have the decision to deliver individual blood treatment to individuals, leading to loss of management: no engineer, technician or person with real professional qualifications. It is responsible for "checking the quality of the water, the quality of the filter before, during and after dialysis". In addition, Mr. Yang was determined to have a series of violations in the management of the use of medical equipment and other assets.

Mr Do Anh Tuan, director of Thien Son CPDP, was investigated by the investigation agency and after signing the contract with Hoa Binh Hospital, the company was not sold but sold to Buh Manh Quoc's Anh tram. Mr. Tuan was accused of leaving the country to carry out all the steps such as research, quotation, repair … The behavior of Mr. Tuan led to the national free use of chemical HF, HCL to wash the membrane Filtration leads to the persistence of a large amount of chemicals that is several times higher than the allowed level, causing particularly serious consequences.