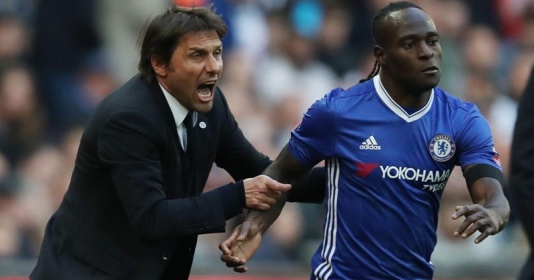 The change of Antonio Conte to work on Giuseppe Meazza will only be a matter of time. At the moment, the transfer of Inter Milan follows for the signings of the Italian strategist. Sports director Piero Ausilio named Edin Dzeko, Romelu Lukaku on the list to be recruited and placed Mauro Icardi in the "black book".

Most recently, it was Victor Moses' turn to be led by the Nerazzurri leadership. According to FCInterNew.it, stadium owner Giuseppe Meazza is willing to spend 12 million euros to persuade Chelsea to agree to release. The Nigerian star's contract with Chelsea only lasts until June 2020. He himself is no longer on coach Maurizio Sarri's plan and was loaned to Fenerbahce on loan last winter.

Things have become more and more convenient for Inter Milan, when in a recent interview Victor Moses talked about his future. In an interview with Standard Sport, the 29-year-old said:

"I had a great experience, but I will not be staying here next season. I will leave Fenerbahce and continue having a new adventure in my career. "

Victor Moses' response made many people doubt the desire to meet with coach Antonio Conte in Giuseppe Meazza. It is very likely that this agreement will soon be promoted shortly before the start of the summer transfer market.