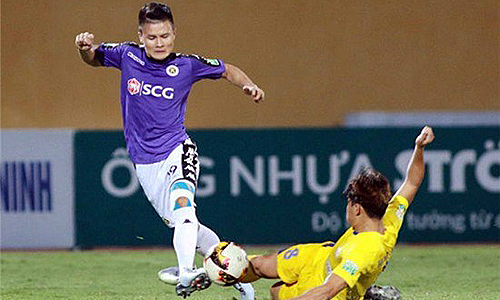 The game in the fourth round of the 2019 V League was an opportunity for Quang Hai and his team to dispel the dark cloud after losing to Yangon United in the AFC Cup.

In the courtyard of Du Day's restaurant on April 2, Hanoi lost to the team that was underestimated by Yangon United. Completely competing on the ground, creating numerous opportunities, but the key points of the capital team such as Pape Omar, Hoang Vu Samson can not take advantage. Even when he received a penalty, captain Nguyen Van Quyet also kicked. At the lowest level, Tran Van Kien made a mistake with a clumsy slide, letting Lwin score only the match. After the match, coach Chu Dinh Nghiem let slip that he could not explain why the white team in front of Myanmar represented.

Hanoi needs a victory to regain the spirit and belief. However, SLNA is in top form, not an easy opponent to play now. The Nghe Nghe team lost the duel Phan Van Duc and Pham Xuan Manh because of injury, but still stable playing in the national Wake-up 247 championship with three unbeaten games, 7 points like Hanoi. The re-signing with Olaha and Hoang Van Binh, recruiting Tran Dinh Dong and Nguyen Quang Tinh to help the Nghe football team to have an old and dirty squad, hard to beat. Before the Hang Day trip, SLNA also received good news when there was an additional sponsorship of 20 billion dongs, bringing the total investment for this season to 50 billion dong.

On the other side of the battle line, Hanoi is in a traumatic storm with a series of names that can not go on the field: Moses, Nguyen Van Quyet and Tran Dinh Trong. However, this is not how the champion champion is despised. They even have replacement cards. Midfielder Nguyen Quang Hai and goalkeeper Bui Tien Dung will return to play after being rested in the Yangon game after signs of fatigue after returning from the U23 qualifier in 2020.

Hanoi is also a rival of SLNA. In the last 9 meetings, the capital team won 8. The only time SLNA enjoyed the fun was in the 1/8 match of the 2017 National Cup. Nghe's team won in the penalty shootout after a 1-0 draw. 1 during the official tournament. "Hanoi is the strongest team in the V-League at the moment, they are equal in all three lines, the ball is very good in control, and against them we have to prepare a complete fight," said goalkeeper Nguyen Manh. The SLNA captain shared. "I believe that Hanoi will attack aggressively. I and my teammates have to concentrate as much as possible on defense to avoid losing goals."