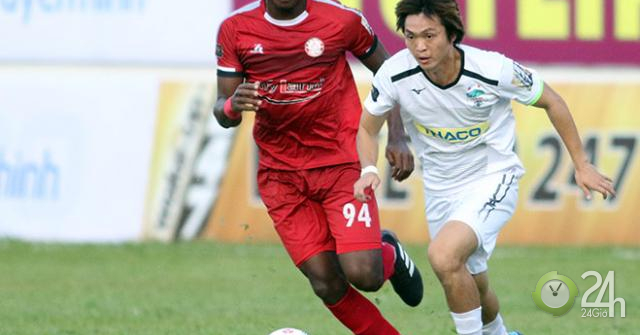 The current champion in Hanoi had a great chance to take the lead in BXH if Quang Hai and his teammates beat SLNA and awaited the good news of the duel between two rivals of the city called Uncle.

Video of Hanoi overtakes Viettel in the capital "derby" in the third round of the V-League 2019:

After almost a month of pausing to make room for the U-20 Asia tie and the AFC Cup series of games, V-League 2019 will return this weekend with 7 exciting games on Vietnamese grass courts. One of the most exciting games is the game between Saigon and Ho Chi Minh City at Thong Nhat Stadium at 19:00 this afternoon (April 6). The Ho Chi Minh City Club (red shirt) has won the first three rounds of the V-League this year and is surprisingly leading the standings.

Ho Chi Minh City is the most interesting phenomenon in this year's V-League, when going through 3 rounds, South Korean coach and general Chung Hae-song won a maximum of 9 points and is leading, ranking above both champions of Hanoi. After 3 rounds, Ho Chi Minh City suffered only one goal and is one of three teams with the most defensive lines of the V-League 2019 (along with Hanoi and SLNA).

Defense assets under the command of former national player Vu Ngoc Thinh are coordinated to support each other to create a solid wall against the goal of goalkeeper Thanh Thang. The certainty of defense has created the confidence to help the team focus on attacking and finding targets for the city of Ho Chi Minh.

At the highest level, recruits such as Pham Van Thanh, Ngo Hoang Thinh and Le Hoang Thien took turns to win the city team's team call Uncle. New rookie Vinicius has also proved to be a "worth the money" deal with a two-out stage to score a goal in the last three games.

However, kicking a "derby" match with an opponent like Saigon has never been so simple for the HCMC. Saigon in the third round, despite having to make a guest in Pleiku, but won joyfully 3-1 against HAGL. The team of coach Nguyen Thanh Cong currently has 6 points and is in 5th place. If HCM City wins, Saigon will balance the score with the "neighboring rivals" and may even jump to the top 3 teams. . 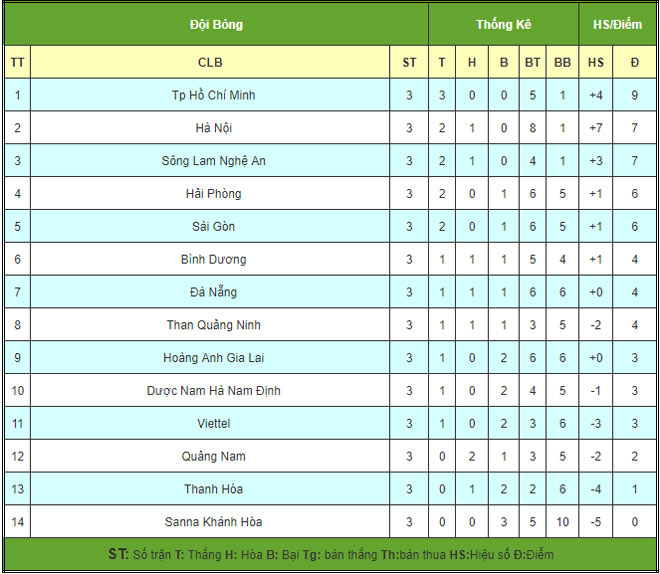 Another match will be held at 7:00 pm on Sunday (April 7). That is when the V-League Hanoi champion receives SLNA in the key match between the two teams who are respectively in 2nd and 3rd place. They are currently unbeaten after 3 rounds with 7 points (2 wins), 1 draw) and are surprising to usurp the top of the HCMC.

With Hanoi, the desire to win in the field of restaurants of Diem was even greater when only 4 days ago, also in their "fire pot", they suddenly lost to Yangon United (Myanmar) 0-1 in the third game. Group stage AFC Cup.

It was also the game that led captain Van Quyet – who had broken an injury penalty and would have to stay out for 4 weeks. In such a difficult context, Chu Dinh Nghiem's ​​teachers needed the brilliance of the Sub-23 Vietnamese players who had just successfully competed in the U23 Asian qualifiers such as Quang Hai, Van Hau, Dinh Trong and the two main players. Public goods like Oseni shine.

With SLNA, a 2-1 win over Binh Duong in the previous round will give them strength on their trip to the capital this time around. The Nghe team will do everything to at least win a draw against the defending champion.

With HAGL, the German team is determined to regain confidence in the fans after the defeat to Saigon in the last game. But getting Lach Tray Stadium guests to face Hai Phong in 4th place at BXH is not an easy challenge. The form of Tuan Anh and other pillars of HAGL this season were not stable and there is cause for concern for Duong Minh Ninh's teachers and students in the match at 5:00 p.m. this afternoon (April 6).

The final match of V-League 4 will take place at 5 pm Monday (8 April), when Binh Duong's host welcomes the ambitious rich novice Viettel at the Go Dau shipyard. Both teams are desperate to win again after disappointing matches against SLNA and Hanoi in the third round.

As for Da Nang, Ha Duc Chinh's good performance at Vietnam U23 has recently been maintained when this striker and the management team as guests of Thanh Hoa still do not know the scent of victory in the match at 17.00. Japanese (7/4)?

Cong Phuong has a chance to shine on Jeonbuk Hyundai's guest trip.