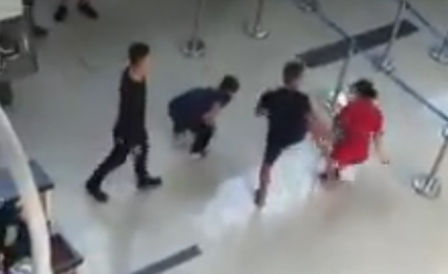 The Tho Xuan District People's Court (Thanh Hoa) today tried the case of assaulting the Vietji Air employees at Tho Xuan airport.

According to the indictment, at around 2.30 pm on November 23, 2018, Le Van Nhi, Le Trung Dung and Pham Huu An went to Tho Xuan Airport to conduct procedures for the Thanh Hoa – Ho Chi Minh City Vietjet Air.

While waiting for the procedure, Nhi and An wanted to take a picture with Le Thi Giang (a Vietjet Air official), but Giang refused.

Seeing this, Ms. Le Thi Hien (representative of Vietjet Air at Tho Xuan airport), Mr. Trinh Ngoc Hoan and Vu Quoc Hoi (Tho Xuan airport security officer) came to a halt but were beaten by Nhi and Le Trung Dung In the face, take the hat and use the phone to hit Jiang's head.

Tho Xuan District police and police police forces had to add forces to the new scene to prevent and control the disturbing movement of objects.

Male passengers at the airport of Tho Xuan (Thanh Hoa) did not follow the instructions and still attacked, causing injuries to the head 1 security officer.