The YouTube comments section is undoubtedly the most feared by those who are dedicated to submitting content to the platform. Especially when the content is controversial, and many take the anonymity to shed insults and unpleasant messages. Google is aware of this, which is why it is testing a new feature that will allow hide this section through a button on the YouTube Android app.

This new YouTube – which has created a makeup filter for influential videos – is being tested only in India, according to users, although there are also users in Australia who claim to have received the update.

The new comment button appears between the «I do not like» and «share»and moves the user to a new window where all views are stored. If the user moves with his finger down – where he used to be the comments section – he will be indicated, as can be seen in the image, that he can access it by clicking on a new button.

The appearance of the new "comments" button has changed the "save" button to a new menu that opens when the user presses the triangle that appears next to the title of the video, as can be seen in the photo.

The new comments section incorporates a number of changes. Although the appearance is very similar to the previous one, and the comments can still be read while the user watches the video, the novelty is that, when moving down, update comments instead of leaving the section. To perform this action, there is now a button next to the sort options. 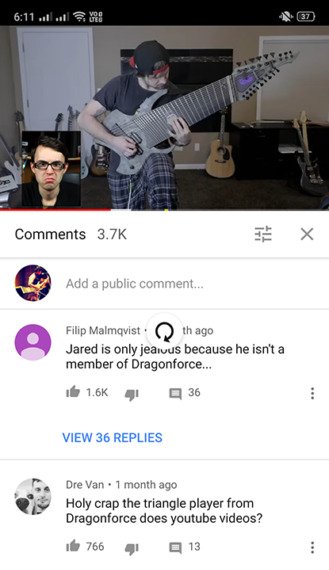 Considering the problems that usually arise in social networks due to malicious messages and insults, the final inclusion of this update would be great news for YouTube users. It remains only to see if it will reach the rest of the countries.