Although in December the German central bank, the Bundesbank, forecast a 1.6% growth, last Friday its chairman, Jens Weidmann, lowered those expectations to less than 1%.

And that negative number is not isolated, but it adds to a trend that started the year before and worries one of the world's leading economies.

In the last quarter of 2018, German GDP (Gross Domestic Product) contracted 0.2% and did not recover growth in the first three months of 2019.

Data that is not serious, but that surprises and worries in the case of Germany.

Generally, an economy is considered to go into recession after two consecutive quarters of contraction. This means that the largest European economy avoided the slightest decline in that state.

One reason for this cooling is to look for it in the fall of the German industrial production in the last months and in the collapse of the industrial orders, as can be seen in this graph. 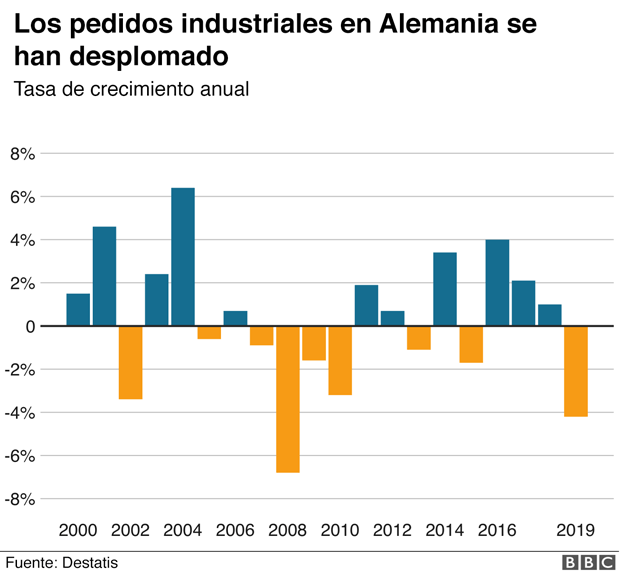 In February, the drop in exports was 1.3% over the previous month, according to data from the Federal Statistics Office, the highest of last year.

Although exports have increased by 3.9% in the last 12 months, the short-term outlook does not seem positive.

The problems that come from China

A study published in early April showed that orders and exports "are falling at a rate never seen since the last global financial crisis."

The reduction in Chinese demand, one of Germany's main customers, is one of the key factors in this trend. 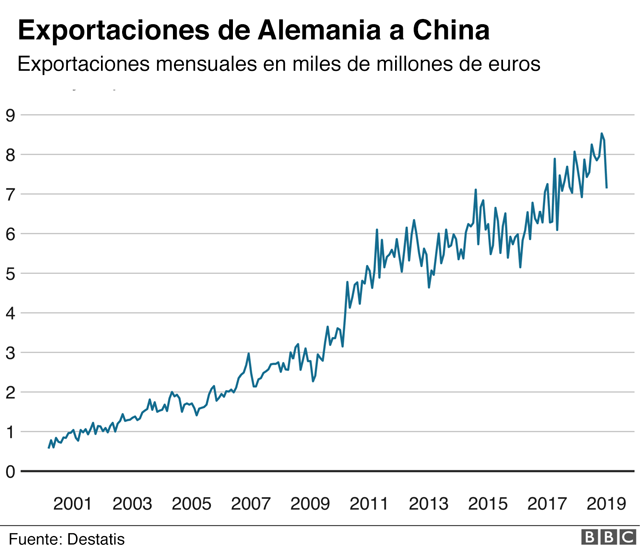 Why is the German economy important?

As it is going to Germany, whose economic activity represents 29% of the entire euro area, it depends to a large extent on the progress of the rest of Europe.

Berlin is the fourth exporter of some of the major economies of Latin America, such as Argentina, Mexico, Colombia or Chile. And the third in the region taken as a whole, according to the International Monetary Fund.

However, not all German economic indicators are negative. The country's 3.1% unemployment rate remains one of the lowest in the world and continued to decline even in this period when GDP performance was weak. 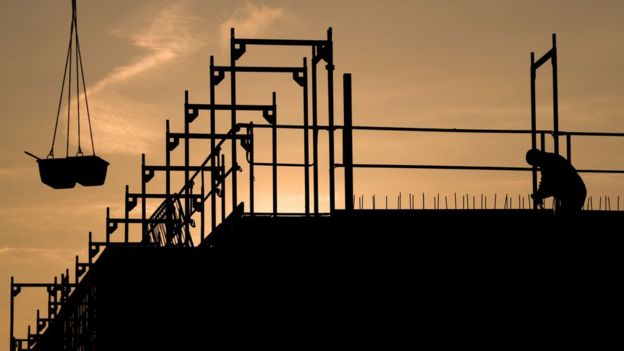 Within the group of more developed economies, only the Czech Republic, Iceland and Japan have a lower unemployment rate.

The percentage of the working age population that is working also grew at a rate of 0.2% in each of the last two quarters of 2018.

The explanation for this apparent contradiction between the different economic indicators can be found to the extent that, although industrial production is going through a delicate moment, services and construction are undergoing a moment of expansion and a strong internal market is maintained.

Situation in the euro area

On the other hand, the brake on German growth does not occur in isolation from the rest of the eurozone, which has also suffered in recent months. 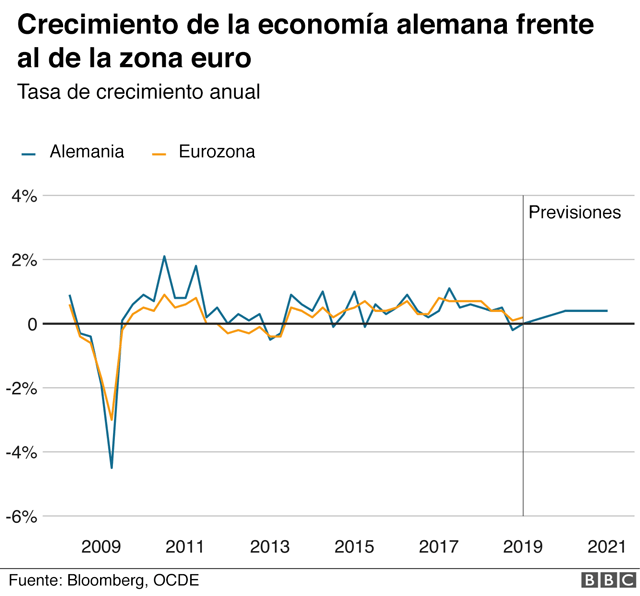 Although some countries – like Spain, within the large economies of the euro zone – continue to grow at a good pace, others, like Italy, are in recession.

In fact, the Italian economy has not regained its size before the financial crisis of 10 years ago.

And unlike Germany, the unemployment situation in the rest of the European countries varies greatly from country to country. For the euro area as a whole, the average is 7.8%, a relatively high figure.

In countries like Italy, Spain and Greece, double-digit rates are maintained, which in the Greek case is up to 18%.

Rates in the United States and in Brexit

The reasons behind the economic problems of Germany and the eurozone as a whole are diverse.

On the one hand, recovery after the financial crisis has never been completed. 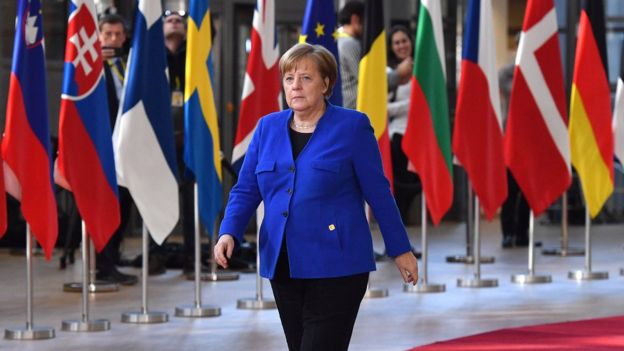 On 10 April, the EU and the UK agreed to extend the Brexit deadline by 31 October 2019 | GETTY IMAGES

Last year, the region was hit by the precarious situation of global trade. In addition to the already mentioned cooling of the Chinese economy, the tariffs that the president of the United States, Donald Trump, imposed on the imports of steel and aluminum also had impact.

The possibility that such tariffs would also apply to car imports would have an even more detrimental impact, especially for the German economy.

On the other hand, the uncertainty stemming from the lack of agreement on Brexit was another factor mentioned by German companies in the polls when asked about the reasons for poor economic progress.

The recent extension of the period of negotiations between the United Kingdom and the European Union, on the other hand, had a positive impact on the morale of German investors. 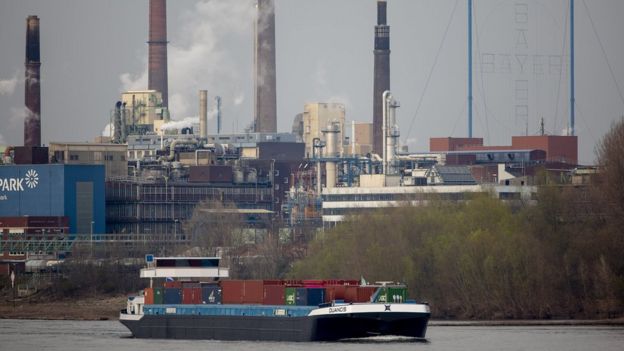 Drought forced to restrict circulation on the Rhine, one of the great arteries of industrial transport in Germany | GETTY IMAGES

The ZEW indicator, developed by the Leibniz Center for European Economic Research in Mannheim and measuring the economic climate, rose to 3.1% in April and posted positive numbers for the first time since March 2018.

But along with the whims of the international context, the German economy has also been exposed to internal factors such as the introduction of new Tests of emissions, which impacted on car production last year.

It also affected the drought, which forced it to restrict the transit of goods for a time along the Rhine, an important commercial artery of German industry.

Given this situation, one of the main issues is what the European Central Bank can do to encourage growth in Germany and Europe.

The options available to you are limited and using economic policy as a tool to counteract the cooling of the economy can be tricky.

European Central Bank interest rates are already at the lowest level where they can be. The main rate is zero, the rate applied to the credit line is 0.25% and the deposit rate is -0.40%.

The European Central Bank stopped its "quantitative expansion" policy at the end of last year, which consists of buying financial assets with newly created money.

Going back to this type of measures is possible, but has complications. For certain types of assets, the ECB is approaching the maximum amount it intends to have without distorting the market too much.

From a political point of view, this would be difficult, especially in Germany, where it has always been viewed with suspicion.

"Making money," as this program is sometimes called, can lead to an increase in inflation and raise fears in Germany about this phenomenon that hit the country hard during the first half of the twentieth century.

What can the German government do?

Other tools to revive the economy, such as reducing taxes or increasing public investment, are in the hands of the German government.

Many economists argue that Germany has room to choose this path. The German government spends less than it collects on taxes, but is reluctant to use its finances to stimulate the economy.

The latest recommendations of the European Commission point out that it is still necessary to apply "prudent" policies that ensure the sustainability of the member governments' accounts.

Some critics, on the other hand, consider that the European Union's rules on euro area governments' accounts are too restrictive.