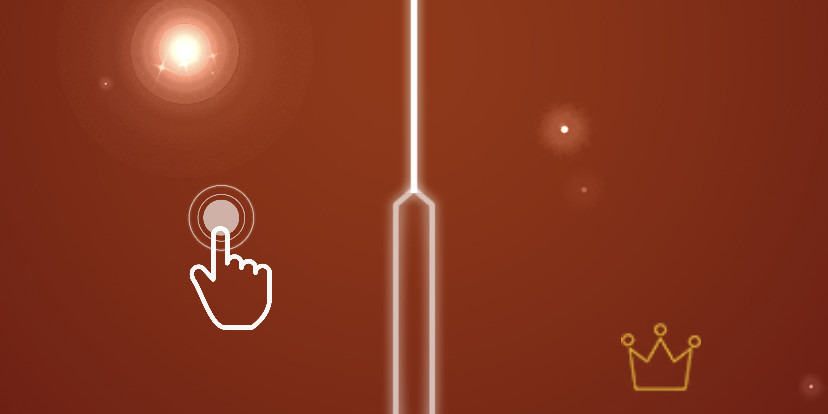 Sometimes the simplest games are the most successful. We recently saw examples like Paper.io 2 or AMAZE! they have in their simplicity the key to their success. What we are proposing now is a title that, in a short time, has been placed among the top three downloads on the App Store and on Google Play.

It's called Rhythm to Punts (Dot n Beat) and it's an arcade game that puts you to the test your pace and the speed of your fingers. It has an average rating of 4.2 out of 5 on both platforms and only in the Google app store has more than 100,000 downloads. Let's see how it is and why this success.

Do not stop the Music!

Developed by Badsnowball Limited, Rhythm of Points is a addicting arcade game which challenges your musical rhythm and forces you to move your fingers with agility to quickly touch the screen. All this, tempered with melodies composed by independent musicians from all over the world.

As we said, it has become one of the most downloaded free apps for iOS and Android thanks, in large part, to the combination of attractive features. audiovisual effects with various game modes suitable for all ages. In fact, on Google Play, it has the rating of PEGI 3 and, in the App Store, is recommended for more than four years.

Once you've downloaded the game, it asks for your permission to send personalized notifications and advertising, something you can either refuse or accept; also recommends that you use headphones for a better experience (and not to disturb those around you, let's not cheat).

From there, and although at first it may be difficult to understand the trick, the gameplay is very simple: just control the direction of the game. light ball motion Playing the screen to the beat of the music. The first song, and the easiest one, is Little Star, certainly not unknown to you …

The higher the score, the more hearts and diamonds you will receive. unlock new music, something you can also do by watching ad videos. In addition, the game allows you to share your scores on social networks to challenge your friends and check the world rankings with the best players.

The game download is free, but contains ads and offers shopping within the application, which in the case of iOS has a price between 1.09 and 4.49 euros, and in the case of Android, cost between 0.99 and 5.49 euros. These purchases consist of acquiring more hearts and diamonds to unlock more levels, or to avoid advertising (which is excessive and rather intrusive).