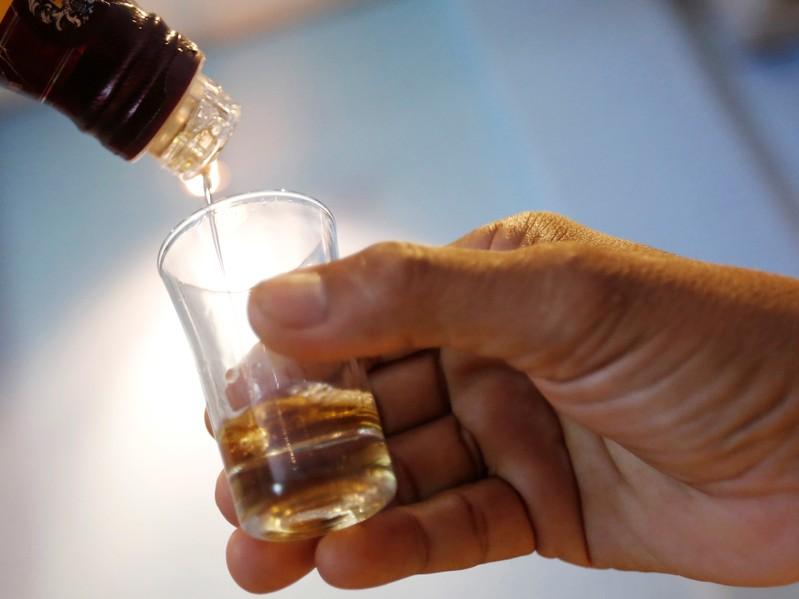 Stock image of a Servant serving whiskey in a glass at a restaurant in Phnom Penh, Cambodia. October 18, 2018. REUTERS / Samrang Pring / Archive

LONDON (Reuters) – Blood pressure and stroke risk are steadily increasing as alcohol consumption increases, and earlier allegations that one or two drinks a day may protect against a stroke are not true, according to a study's findings . genetic study

The survey, which used data from 160,000 Chinese adults, many of whom can not drink alcohol due to genetic intolerance, found that people who drink moderately – 10 to 20 grams of alcohol a day – increase their risk of having a stroke. (LCA) between 10 and 15 percent.

Among those who consume four or more doses per day, blood pressure rises significantly and the risk of stroke increases by about 35%, according to the study.

"The message is that, at least in the event of a stroke, there is no protective effect of moderate alcohol consumption," said Zhengming Chen, a professor in the Nuffield Department of Population Health at Oxford University who co-led the study. "Genetic evidence shows that the protective effect is not real."

The World Health Organization estimates that about 2.3 billion people in the world consume alcohol, with a daily average of 33 grams of pure alcohol per person. That amounts to almost two glasses of 150 milligrams of wine, one bottle of 750 ml beer or two doses of 40 ml of distillates.

The research, published in The Lancet, focused on people of Asian descent, many of whom have genetic variants that limit their tolerance for alcohol. However, the authors said the findings should apply to people all over the world.

Because genetic variants have specific and relevant effects on alcohol but do not affect other lifestyle factors such as diet, smoking, economic status or education, scientists can use them to determine the causal effects of alcohol. ingestion of alcohol.

"Using genetics is a new way of solving whether moderate alcohol consumption actually protects, or is a bit harmful," said Iona Millwood, an epidemiologist at Oxford and a co-author. "Our genetic analyzes helped us understand cause-and-effect relationships."

Edited into Spanish by Janisse Huambachano

Our standards:Principles of Thomson Reuters