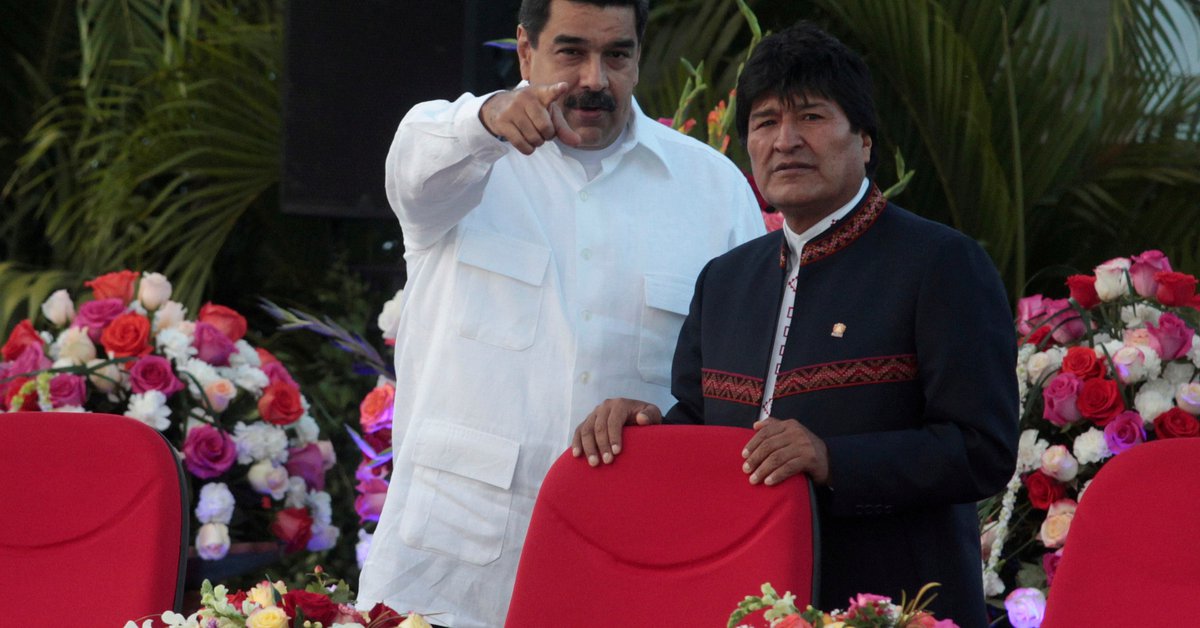 After the controversy and secrecy surrounding Evo Morales’ lightning trip to Venezuela, dictator Nicolás Maduro confirmed that the former Bolivian president was on Venezuelan soil over the weekend.

“Here is the gift that Evo Morales brought me, Evo brought me this gift, this book, I read it at dawn, I read it in six hours”said the Venezuelan during an act on a beach in the state of La Guaira, about 40 minutes overland from Caracas.

Maduro guaranteed that the text, entitled “Evo Morales, we will return and be millions”, tells “the details of the coup” in Bolivia and the exile of the ex-president in Mexico and Argentina. “Thank you Evo for this book you gave me personally, thank you very much,” he exclaimed.

Evo Morales, a political ally of the Venezuelan dictator, reportedly returned to Argentina this Sunday morning, stealthily, without showing himself in public or explaining the reasons for his controversial trip to Venezuela, and aboard a ship sanctioned by the Donald Trump government.

During the less than 48 hours he spent on Venezuelan soil, Morales kept his schedule a secret. The official media of the Chavista regime, which divulge each of Maduro’s acts, opted this time for absolute silence and did not divulge a word about the Bolivian’s visit.

Morales, in fact, actively used his Twitter account over the weekend, but in none of the messages he posted did he tell him what made him take a lightning trip through Venezuelan lands.

The former president had a private meeting with dictator Maduro in which the regional situation was analyzed after the victory of MAS dolphin, Luis Arce, last Sunday. And he would also have discussed his particular situation.

However, neither Morales’ environment nor the Chavista inner circle revealed the secret conversation.

The former president of Bolivia went and returned on an Embraer Lineage 1000 aircraft (registration number YV3016) painted in the colors of the Venezuelan state airline Conviasa. Chavista’s plane has been blacklisted in the U.S. since the Donald Trump administration launched a sanctions package targeting the state airline in early 2020 to pressure the regime.

Morales’ brief trip was a surprise. In exile in Argentina since December 2019, after the riots in Bolivia after the fraudulent presidential elections, which led him to resign and leave his country, he only left the country once. It was in February 2020 when he traveled to Cuba undergo medical treatment, of which he gave no details.

This weekend, however, his visit to Venezuelan territory was somewhat overshadowed by the feat of Leopoldo López, the opposition leader who managed to leave the country bypassing all the checkpoints of the regime that is already in Spain.

The controversial trip to Venezuela came days after Arce’s resounding victory in the Bolivian elections. Morales insisted last week that he will return to his country at any moment, but his party, the Movement for Socialism (MAS), does not appear to have his return as a priority, at least publicly.

Following the victory of ex-minister Luis Arce in the October 18 elections, Morales de Argentina’s statements about his desire to return to Bolivia did not wait, but several members of his party maintained a cautious speech marking distance with the intentions of president.

While Morales expresses that “Sooner or later” will return to Bolivia, who has not stepped since November last year, a part of the followers of MAS points out that it is not the right time for his return, although they emphasize that he has the right to return to the country.

Morales was president of Bolivia for almost fourteen consecutive years, the longest term in the country’s history.

If the ex-president returns to the country, He must appear before the Bolivian court to defend himself in cases where he is accused of alleged genocide, terrorism, sedition, electoral fraud and rape, among others. that many started Jeanine Áñez’s transitional government.

Leopoldo López published the first photo with his family in Spain