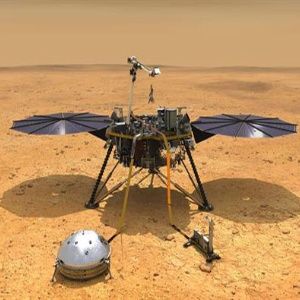 The National Aeronautics and Space Administration (NASA, announced on Monday that the space mission InSight arrived on the surface of Mars.

After a live broadcast of the trip from the Jet Propulsion Laboratory of the California Institute of Technology in the United States, the landing.

"InSight can test whether or not there is water on Mars, where it is and how to get there, among other information we can know," said NASA administrator, Jim Bridenstine.

Scientists estimate that the new mission will be able to analyze the size, thickness, density, and crust of the planet to gain a better understanding of the evolutionary processes of space.

The robot was able to pierce the atmosphere of the planet at 19,800 kilometers per hour and the landing lasted 6.5 minutes, specifically west of Elysium Planitia, the second largest volcanic region on Mars.

InSight has a drill, which can drill the surface three to five meters deep, and a seismogram that will allow you to inquire about the formation of the celestial bodies of the dream system with two years to complete the mission.