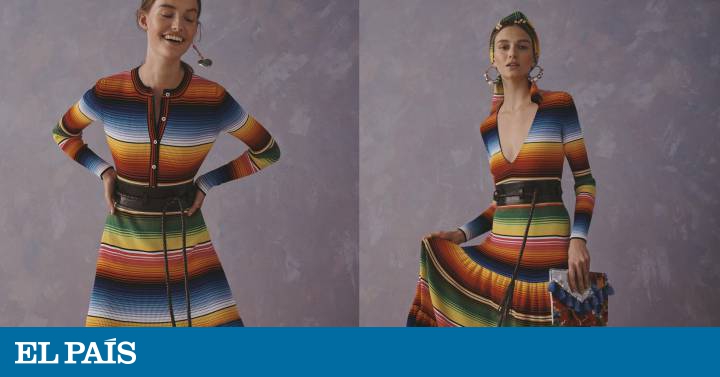 Young designer Wes Gordon works as creative director for Carolina Herrera, the Venezuelan seamstress who is an icon of the runways. The Resort 2020 is the recent collection of the creative couple and is inspired by the "joie de vivre" of Latin America. Vogue he described as "young, fresh and true to the roots of the brand". For this can be added "controversy." Some seasonal dresses generated discomfort in the Mexican government. Andrés Manuel López Obrador's left-wing executive accused Herrera and Gordon of cultural appropriation by incorporating drawings and identity elements of local indigenous peoples into their robes.

The Secretary [ministra] of Culture of the country, Alejandra Frausto, sent a letter of complaint to both designers on Monday. Frausto says some of the patterns used in the collection are part of the worldview of people in specific regions of Mexico. The government asked Herrera to explain "publicly" the fundamentals that led the fashion house to use cultural elements whose "origin is fully grounded". In addition, she asks the dressmaker to clarify if the communities that carry these pieces will benefit from the sales of the collection.

One of the pieces of clothing, for example, is a long white dress that has colorful animal embroidery that intertwine with flowers and twigs. "[El] the embroidery comes from the community of Tenango de Doria (Hidalgo); In these embroidery is the history of the community itself and each element has a personal meaning, family and community, "says the minister in the document to which EL PAÍS had access.

Two other cases cited in the Frausto protest refer to the use of floral embroidery on dark fabrics, such as those made in the region of the Isthmus of Tehuantepec in Oaxaca. And the incorporation, in two other dresses, of the famous sarape of Saltillo (Coahuila). "In the history of this sarape we find the route from the city of Tlaxcala to the founding of the north of the country," explains the official of the National Movement of Regeneration (Morena) to the designer based in New York since 1980.

Frausto believes that the clothes Mr. Gordon conceived for Casa Herrera can be inserted into a worldwide debate on the cultural rights of indigenous peoples. "This is a principle of ethical consideration that … compels us to draw attention and put on the table an urgent question …: promote inclusion and make visible the invisible," says the letter, dated June 10. This newspaper tried, unsuccessfully, to contact Carolina Herrera's New York office to hear the reaction after the letter.

It is not the first time that Mexico is living a controversy over the use of indigenous peoples' designs in fashion collections. In 2015, a tunic and a blouse of Frenchwoman Isabel Marant generated many criticisms in social networks. The designs of the clothes drank of those worn by the women Mixes of the city of Santa María Tlahuitoltepec, in the mountainous region of Oaxaca. Zara, of Inditex, has also been accused of plagiarism on several occasions for the use of Mexican handmade drawings. The most recent scandal in which the Spanish brand was involved was also in 2018, when the press discovered that one of the jackets it promoted wore a design similar to an embroidery worn by Aguacatenango women in the municipality of Venustiano Carranza. Chiapas This is not limited to the fashion world. Nestlé also used Mexican designs to sell chocolates.

Morena's government is preparing a legislative strategy for cases like those of Herrera, Marant and Zara to be the last. The ruling Senate party presented last November the bill to safeguard the knowledge, culture and identity of indigenous and Afro-Mexican peoples. The standard aims to repeal some existing copyright laws to prevent designers from using such illustrations without the consent of the people.

"It's a very big law that gives ownership of these elements to the original cultures," said Senator Susana Harp of Oaxaca, chair of the Culture Committee and author of the regulation, who will be working for two more months. together with other legal instruments. "The market must understand that there are not two balls up or two balls down." These designs are images of their worldview, communities are asking for respect, they do not ask for money, they want designers to approach them and ask for permission. adds the legislator. One section of this law states that native peoples may or may not sign agreements with designers who intend to use their designs.

Harpa indicates that there are also examples of good work practices with local artisans. Among them, the Roche Bobois, a high quality French furniture store, which made a collection with the Huichols. For each piece sold, the Indians obtain an income. The Mexican Carla Fernandez also became a reference with its collections influenced by the textile wealth of indigenous peoples. A wealth that Carolina Herrera will have to explain to the Mexican government.