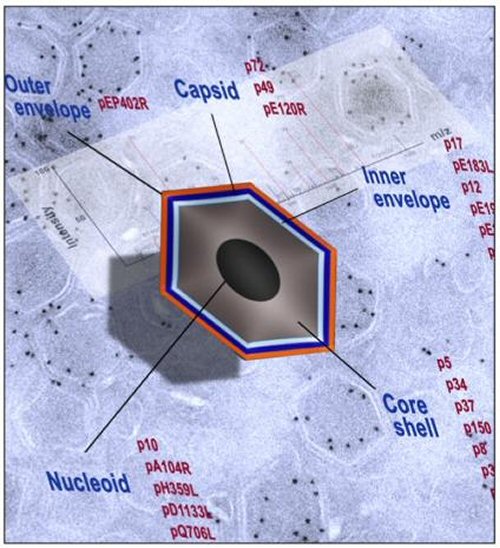 A recent survey provided for the first time an atlas that identifies and describes the 90 proteins that make up the African swine fever virus. The disease, which affects the domestic pig, has recently reappeared in several Asian and European countries.

The work, published in the Journal of Virology, is the work of researchers from the Center for Molecular Biology Severo Ochoa (CBMSO), a mixed center of the Autonomous University of Madrid (UAM) and the CSIC in Spain all these institutions.

The paper, which illustrates the cover of the Journal of Virology, provides an atlas describing the possible roles of these components in assembling the viral particle, expressing viral genes and entering the virus into the host cell.

In this way, they determined the composition of the infectious particle or proteome of the virion, that is, the complete repertoire of proteins that compose it. Thus, they detected 90 different types of proteins, 70 of viral origin (encoded by the viral DNA itself) and 20 cellular proteins, which the viral particle incorporates during its formation and exit from the cell.

Representation of the molecular architecture of the African swine fever virus and the techniques used in its study (mass spectrometry and electronic immunomicroscopy). (Image: Journal of Virology)

"We wanted to go beyond simply describing the composition of the virus and developing a true functional atlas of the infectious particle," explains Dr. Germán Andrés, a CBMSO researcher and research director, for whom the authors also used techniques of electron microscopy and analysis bioinformatics, with which they have been able to assign specific locations and functional categories to many of the proteins detected.

"As an example, some of the more internal proteins (located in the nucleoid) are molecular mechanisms involved in the protection and repair of viral DNA itself or in the transcription of viral genes into messenger RNAs (nucleic acids that transfer coded instructions). the proteins located in the outer envelope of the virus are likely to be involved in their ability to recognize and infect the "target" cell, being critical to the establishment of the infection and, therefore, of the disease.

Dr. Sánchez-Vizcaíno, director of the World Organization for Animal Health (OIE) reference laboratory for African Swine Fever and one of the world's leading specialists in this disease, says "this is a fundamental study not only to understand how the virus is replicated, but also to identify novel therapeutic targets that can control the disease, either through antiviral drugs or through the development of an effective vaccine. "

African swine fever is a serious infectious disease affecting the domestic pig, causing high mortality rates in the affected areas. The causative agent, the African swine fever virus, is able to infect domestic pigs and feral pigs, spreading easily through direct contact between them or through certain species of ticks that transmit the disease through the bite.

After a long absence from the European continent, the disease reappeared in 2007 with an epidemic outbreak in the Caucasus region. Since then, the disease has spread rapidly in several Asian and European countries, currently affecting nine European Union countries and, since August 2018, China, the world's largest pig producer.

In Spain, a third-world producer, the disease was eradicated in 1995. However, the recent rapid spread of the disease throughout Europe and the absence of a vaccine pose a serious threat to a sector of major socio-economic importance in Spain.

The African swine fever virus is also a virus of great biological interest due to its extraordinary genetic and structural complexity. Its genome is a DNA molecule that contains 150 genes and its icosahedral structure includes at least five structural domains (layers). Unlike other, simpler viruses, African swine fever virus is composed of a large number of different proteins whose identification was essential to understand its function and to develop antiviral strategies that can eradicate the disease. (Source: UAM)