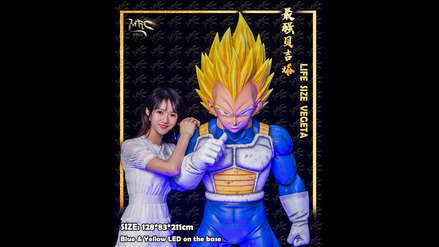 Christmas is coming and we bring a good present for the kids (not for kids). The popular character of Dragon Ball Z, Vegetawill have a collectible figure of human size.

This exclusive piece measures 2.11 meters in height (larger than the original 1.64 meters) and is made by the company Yume MRC. There are only 150 units in the world.

The impressive figure of Prince Vegeta arrives in the form of Super Saiyajin, but he will have the option of swapping the top of the statue for the traditional black hair.

The price? Well, if you are a fan of the saga and want to have this strangeness, we tell you that it will be for a high price:Vegeta units are already on sale for $ 3,999.

In other news, the new season of Dragon Ball Super manga designed by Toyotaro, the official successor of Akira Toriyama, astonishes everyone since Goku was defeated at once by a new character in recent leaks.

The film "Dragon Ball Super: Broly " this will be released December 14th in Japanese cinemas and its version dubbed in Latin Spanish is expected in our cinemas January 17