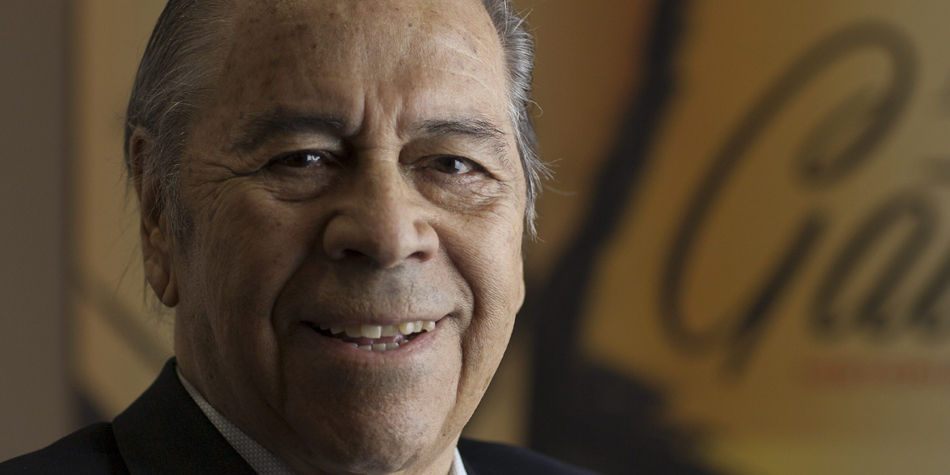 The clock stopped for Lucho Gatica shortly after he had marked 90 years. So far, the request he made in what is possibly his most iconic song, "The Clock," has become true: "The clock stops its way, because my life is off." With this time of life, Gatica died in Mexico, a country that hosted him half a century ago and where he developed most of his career as a singer. and actor, in addition to building part of the success that would give the title of "king of bolero".

The bolero born in Chile, on August 11, 1928, moved away from the stage and public life in his later years, as his health deteriorated. He took refuge in his home in El Pedregal, one of the most exclusive neighborhoods in Mexico City. His daughter, Aida Gatica, had already said this before turning 90, evidencing his progressive decline: "Your life today is very homely, very spoiled, far from all success and everything that was then, but grateful and full of memories, your grandchildren and your children.My father is very much at peace today. "

It was not Aida who announced the departure of her father, but Luis, another of the seven sons of Gatica. "Good trip, I love you", wrote his son and also an actor on the Instagram on Tuesday, November 13.

"I was like a father, my best friend. In the last three months, his illness has progressed by leaps and bounds, and although we were preparing, when the day of reality arrived, I was left with a very large void that I do not know how to fill," says his nephew Humberto, of Los Angeles (United States). Gatica

The announcement of the loss of this idol has spread from Mexico to all of Latin America and to the world, because without doubt, although Gatica is one of the greatest representatives of music most rooted in Latin idiosyncrasyis also a superstar.

Among all the places where a tear fell to the news, none like in a small spot on the map, the city of Rancagua, in central Chile. That city of Mapuche origin where the singer was born and precisely this year the executive director of the Regional Theater, Cristian Urrutia, announced the location of the first statue of all Chile in honor of the singer.

The sculpture of the singer, already in the square, received the news of the death of her figure with a clear sky after several days of heavy rains in this Chilean region 90 kilometers from Santiago, local press reported. Such is the importance of the singer to this city that the mayor declared three days of mourning.

Carrying the surname Gatica would seem synonymous with "talented artist", since Lucho was not the only one of the family that was dedicated to the world of art, although it is undoubtedly the most recognized until now. Even, who forced him to be who he came to be was his older brother, Arturo Gatica.

In addition to Arturo, there are nephews of actors, but who followed the line of music was the nephew Humberto Gatica, another sample of hereditary talent. He is a music producer and winner of 16 Grammy Awards, to name one of his achievements. The relation between the nephew and the uncle was of son and father. "Lucho took me unconsciously to a place where I found my way.With him I entered the first studio I met, which was from MGM and had a division of discography.I went into the studio and was fascinated, and since then I decided that this was mine greatest passion, music, "says Humberto.

Although in his pocket it carries the 16 Grammy awards, the conquest that at this moment stands out with more eagerness and with the broken voice is that it recorded the last album for its uncle, Stories of a love. The album was released at age 85 and is composed of his greatest hits, with the participation of great artists. "When was I going to imagine that I was going to record with Bublé?" Asked the Chilean bolero at the time about "Maybe, maybe" that he played with the Canadian. He asked him, a man who in his golden years had Elvis Presley, Nat King Cole and Frank Sinatra, among other great names.

In this album also participated duetos produced by his nephew Miguel Bosé, Laura Pausini, Nelly Furtado, Luís Fonsi, Olga Tañón and Beto Cuevas. "It was wonderful, it was made with love, with love … it's one of the greatest," says his nephew. "This last recording was made at age 85, with a worn-out voice, but preserving its grandeur. Humberto knew that was his uncle's last recording. He says, "It was your farewell. The last song on the album is 'Contigo en la distancia'. He closed the curtain with a gold clasp."

Gatica was part of the great stars of the fifties; his fame transcended borders, his albums were released in non-Hispanic language countries: United States, France, Portugal; His arrival in other countries generated public disorder – almost 10,000 fans went crazy at Barajas airport in Madrid (Spain) in 1959 when he arrived and had to leave escorted. He starred in movies, created recording studios, had sneaky novels – they say he had something with the great Ava Gardner – married three times, had seven children, nearly a thousand recordings and many recognitions – among them, the Latin Grammy for your job. career and a star on the Hollywood Walk of Fame.

"I think the contribution was, of course, to put the bolero in a status of a genre that dressed up as a label in the 50s; He played that genre in a different way … Lucho Gatica sang with a vocal technique, time and metric that looked more like he was whispering the songs, which gave him sensuality and closeness, which made it become a mass phenomenon, "explains Pablo Márquez, a Chilean journalist and author of the singer's unauthorized biography.

I believe the contribution was, of course, to put the bolero in a status of a genre that wore like a label in the 50's

The journalist assures that Gatica is the Chilean with more musical success in the history of the country. In biography & # 39; King Lucho sang boleros & # 39; says that even a character as iconic as Elvis Presley was interested in Gatica. In 1957, they met at the Goldwyn Meyer (MGM) studios in Hollywood and talked casually. Both, maximum representatives of their genres.

And is that Gatica, according to the journalist, had the particularity of being in the place and time that should be. At that time, the bolero was in vogue; He came to England, the Beatles themselves recorded a version of the exquisite bolero "Kiss Me Much". As an example of the permeability of the Chilean musician in unimaginable points is that it appears in a chapter of the series of cartoons remembered in the 60's "The Flintstones", Lucho appeared as Lucho Piedrica. It is also mentioned in the novel "Tia Julia y el escribidor" (1977) by Mario Vargas Llosa.

"He had a great vision to choose subjects, he knew what he wanted and what he did not want, he was also very friendly. For example, in Brazil, where he is much loved, one of his arrangers was Tom Jobim, who made four arrangements, and that the score was made by hand … He came across great musicians and characters: friend of Agustín Lara, Pedro Vargas, Cantinflas, presidents, governors, ambassadors … where he had a friend and invited him to stay with him, to stay at home … they treated him like a king, he was very dear and much appreciated He was a guy very humble, very simple, "says his nephew.

The success was built by the bolero outside of Chile. In 1957, he left his country to settle in Mexico after his first tour of Latin America. But he always kept a great love for his roots. "Lucho loved it as I love it, but not to return, but only to visit and celebrate."

As for his relationship with Colombia, according to one of the people who know best about music in Colombia and who dedicated his last three pagan programs to the Chilean singer César Pagano, they did not understand it in the country. "His level was so high and so revolutionary that it did not correspond to the current trend in Colombia. Here we are very traditional and like other interpreters more", says the specialist. He was highly valued in Venezuela and specifically in Cuba and Mexico, where he sang with great orchestras and great composers.

It was in Chile, specifically in the small town of Rancagua, where it all began. "His older brother, Arturo, encouraged him and they began to sing together.When Arturo achieved recognition by singing folk music, then Lucho began to attend Radio Mining and there he took more strength, "says Pagano.It was in 1931 when he decided to abandon his profession as a dental technician to dedicate himself to singing with his brother, then as vocal leader of the trio Los Pilgrims.

Those who knew him describe him as a simple man. Chilean ballad singer Gloria Simonetti shared with Gatica as a jury on a Channel 13 show in Chile. "I did not have excessive ego like many artists of even lower category; He was a very special man, gentleman, affectionate," says the singer.

The simplicity with which they describe comes probably from being born into a simple and humble family, "to the point that I go to school without shoes," says Pagano. According to the connoisseur, Gatica grew up showing off his singing skills, but at the same time struggling with extreme shyness, to the point of hiding behind the curtains to not show his face while singing.

In an interview with EL TIEMPO in 2015, Gatica said: "I'm happy with what I did, I think God gave me more than the project." And he concluded: "I never get tired when I sing. Of course I do not want to do it like I used to, because I'm already many years old. But I'll tell you what, if I may, I'll continue singing until I die.