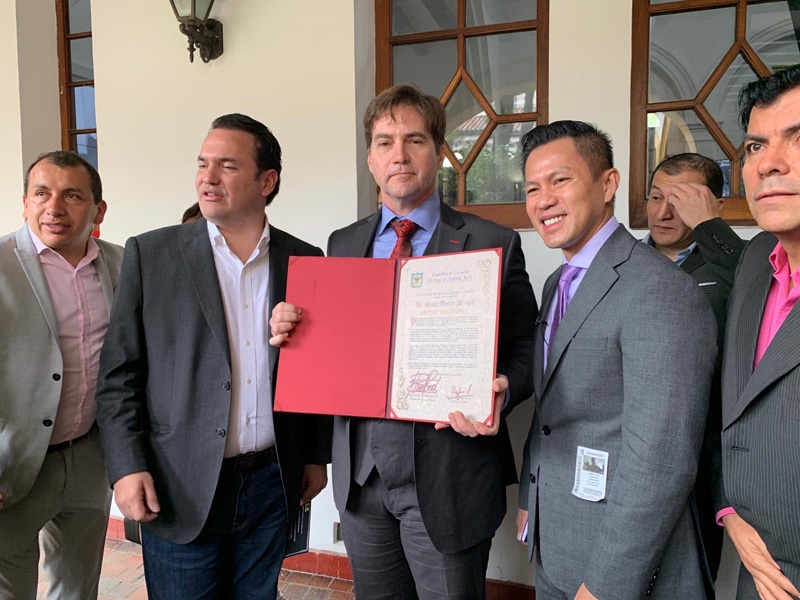 The highest political authority in the city of Bogotá apparently recognized Craig Wright as Satoshi Nakamoto. The alleged official document, which describes the entrepreneur as the "world-renowned creator of Bitcoin", has the signatures of the president of the Council of Bogota, Nelly Mosquera, and the councilman Julio Acosta.

Jimmy Nguyen, president of the Association of Bitcoins SV, published in the morning some photos of the document, as well as Craig Wright posing in the Bogota Council building. The reconnaissance connects Wright directly with Satoshi Nakamoto, pseudonym used by the creator of Bitcoin.

Thank you very much Council of Bogota. Thank you Bogota Council for having Craig Wright speak today about #Bitcoin and the law, and for good honor. pic.twitter.com/bsVjrKgJ7t

The certificate is a distinction for Wright for his "leadership of more than 20 years in the evaluation, research and development of organizational security systems". He also points out that the entrepreneur has contributed in the field of "information technology" with Bitcoin. In this sense, he was awarded with the creation of an "electronic currency that presents new resources".

Nguyen pointed out that Craig Wright would have participated in the Bogota Council to talk about Bitcoin and laws. CriptoNoticias contacted the Bogota Council to confirm the information and to learn more about the motivations of this document. We have not received any official answers yet.

Certain members of the Bogotá bitcoiner community do not consider Craig Wright to deserve recognition as Satoshi Nakamoto. Juan Rodriguez, a Bitcoin enthusiast, tweeted the authorities complaining about the event and demanding more advice.

Sirs of the @BogotaConcept How is it possible that the President @PatriciaMosq and the councilman @Julioc_Acosta sign an official document citing #Faketoshi as the creator of #Bitcoin, this gentleman does not tire of discrediting and you join, do not collaborate with deceit. Advise yourself! pic.twitter.com/pyYIWe5SXs

Other Twitter users said it was "a shame" that Colombia officially recognized Wright as the creator of Bitcoin. Similarly, Netizens from other countries They suggested that the employer could use this certificate as well as the copyright introduced in the United States to support his claim that he is the true Satoshi Nakamoto.

Wright stated on more than one occasion to be the real Satoshi Nakamoto. The Australian researcher filed suit against bitcoiners, filed royalties over Bitcoin's White Paper and went on trial to be recognized as the creator of Bitcoin. In addition, he still was not able to prove that he was involved in the creation of this cryptocurrency.