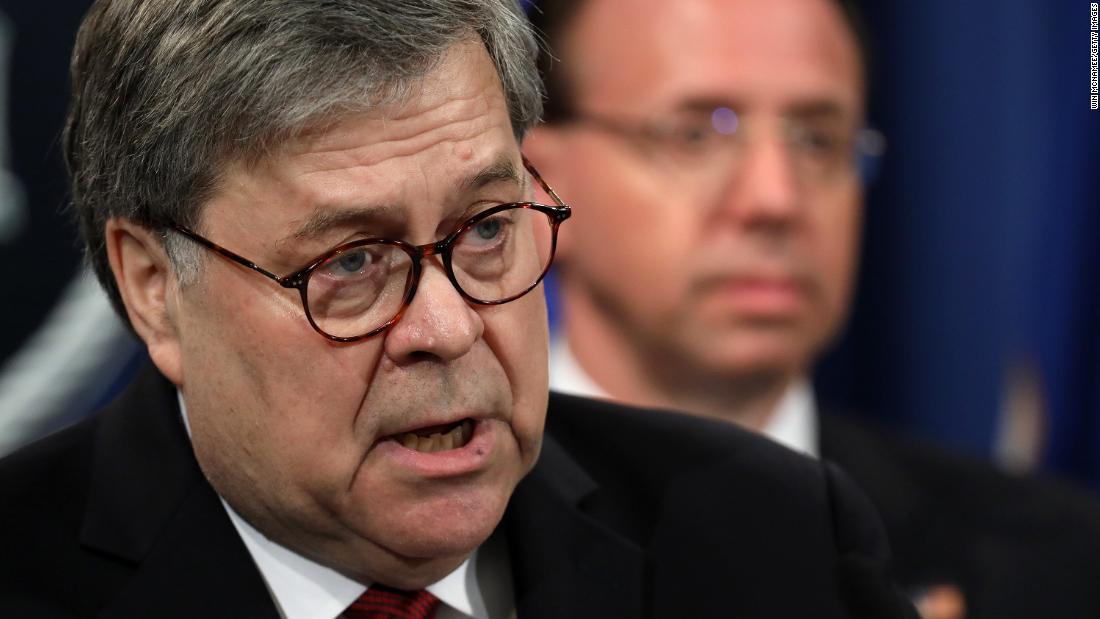 The first came on March 24 when, two days after receiving the Mueller report, Barr issued a four-page summary letter in which he made clear the conclusion that the report found no collusion between the Trump campaign and the Russians and that Mueller made no recommendation as to whether President Donald Trump should be charged with obstructing justice.

The second came on the morning of April 18, when Barr, with Deputy Attorney General Rod Rosenstein at his side, held a press conference to reiterate these findings – in remarkably trumpian language – 90 minutes before actually releasing the public version of the report. .
On Tuesday night, these two movements became sharper – and more disturbing – when it was revealed that Mueller sent a letter to Barr on March 27 expressing concern about the ways in which Barr's abridged document described the evidence surrounding obstructive behavior. Mueller did not disagree with any of the factual statements in Barr's four-page letter, but about the lack of nuances in the obstruction – and the resulting media coverage, according to CNN's Laura Jarrett report.

This revelation creates a number of problems for Barr – most notably that he appeared to be, at best, misleading in his responses about Mueller's feelings about his summary of the report.

On April 9, at a Chamber hearing, Barr seemed completely unaware of Mueller's problems with his abridged report. Here's the main exchange between Barr and Florida Democratic Rep. Charlie Crist:

CRIST: Reports have recently emerged in general that members of the special council team are frustrated at some level with the limited information included in the March 24 letter that does not adequately or accurately portray the findings of the report. Do you know what they are referencing with this?

In an appearance on April 10 before the Senate Appropriations Committee, this exchange took place between Barr and Maryland Democratic Sen. Chris Van Hollen:

BARR: I do not know if Bob Mueller supported my conclusion.

What Barr clearly knew at the time – and he knew almost two weeks ago – was that Mueller had problems with the way he presented the findings of the report in the four-page letter.

Now, you may argue that Barr was not technically there. He knew Mueller was not enthusiastic about how he summed up the larger report, but that did not mean Mueller was against the conclusions. Again, this is technically possible. But in the real world, it certainly seems that Barr was purposefully blinding when it came to Mueller's view of the report, in order to minimize any feeling that (a) he did not present a complete picture of the report and (b) Two men.

And considering all he knew about Mueller's opinion on his summary letter, Barr's decision to hold a press conference more than an hour before the release of the current report is even more disturbing.

At the time – even without the knowledge we now possess about Mueller's March 27 letter – it seemed strange. The attorney general holding a press conference on a report he had seen but no one in the media had been given – and would not it be for another 90 minutes? It seemed that even before Barr began to speak, it was a relatively transparent attempt by the GA to formulate Mueller's report that was about to arrive – to define the terms of the conversation for both Congress and the American public.

Within minutes, it was clear that it was exactly Barr's intention. Here is only part of what Barr said on that day:

"After nearly two years of investigation, thousands of subpoenas and hundreds of warrants and witness interviews, the special council confirmed that the Russian government sponsored efforts to illegally interfere in the 2016 presidential election, but not found the Trump campaign or other Americans conspired in these schemes. "

As I noted at the time, Barr's language was remarkably similar to the way Trump himself had described Mueller's survey. But Barr's language seems far more damning to the attorney general in light of what he knew about the repeated incidents of seemingly obstructive behavior in the Mueller report, and also of Mueller's own concerns about the language Barr had used to describe the discovery in his book. March 24 summary letter.

Barr must sit down to testify before the Senate Judiciary Committee on Wednesday. He has a lot to answer.