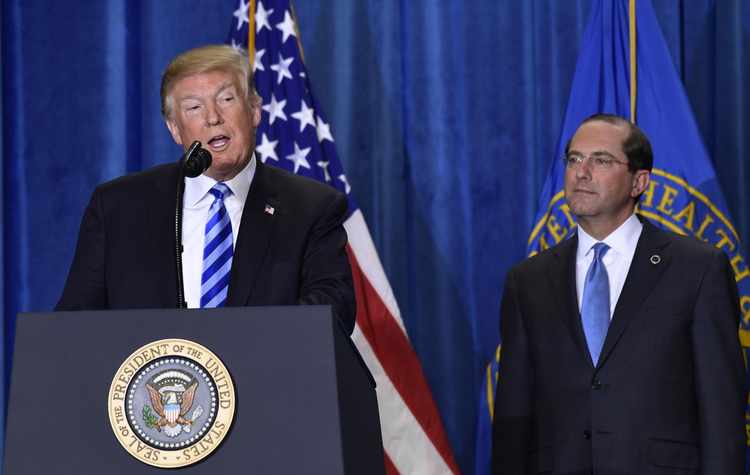 Three years after the Obama administration galvanized the cancer community by revealing "Cancer Moonshot 2020," President Trump defined his own medical plan: to get AIDS to follow the path of polio and smallpox.

HIV, the virus that causes AIDS, has taken millions of lives since its discovery in the early 1980s, and according to the Centers for Disease Control and Prevention, more than one million Americans still carry HIV today. When Trump delivers his State of the Union address late Tuesday night, he must announce plans to effectively end the disease.

As the Politico reported for the first time, the president will commit to completely stop HIV transmission by 2030. The details are yet to come. A spokesman for the Department of Health and Human Services referred RealClearPolitics to the White House, where requests for comments were not returned.

The lack of detail did not stop critics from scrutinizing the strategy still unveiled on Monday.

The Campaign for Human Rights expressed skepticism that "a real commitment" to end the epidemic was being offered. GLAAD, a gay and lesbian advocacy group, also scorned, calling it Trump's promise of "empty rhetoric."

Likewise, Scott Schoettes, who resigned in protest of the HIV advisory board six months after Trump's inauguration, questioned in a RCP interview whether the president would make the pledge only "to have something to talk about beyond his border wall."

The criticism follows a familiar argument from the president's critics. Trump can not take the fight against HIV seriously, they say, after proposing cuts in Medicare, reducing the Affordable Care Act and making it a social conservative like Mike Pence, his vice president.

"It seems like they are just picking this issue out in the air," added Schoettes, who said in June 2017 in Newsweek that Trump "does not care" for people living with the disease.

Even if this is a political calculation on the part of Trump, however, it has been a focal point for HHS Secretary Alex Azar, whom the AIDS Institute praised for its "knowledge, expertise and leadership." Azar promised a plan to fight HIV not just as a biomedical issue but as a social challenge. "

Making it happen will likely fall on CDC director Robert Redfield. A former AIDS researcher before heading the Atlanta-based agency, Redfield pioneered treatments at the Walter Reed Army Research Institute and later at the University of Maryland School of Medicine as a virologist and physician.

When Redfield addressed CDC officials for the first time in March 2017, the new director insisted that the end of the AIDS epidemic "could be done in the next three to seven years if we focus on it." several months later, telling the Wall Street Journal that the job could take "seven years or maybe a little more."

Redfield prescribes "comprehensive prevention strategies," emphasizing the need for an approach called pre-exposure prophylaxis, or PrEP. While there is no HIV vaccine, this pharmaceutical treatment can significantly reduce the likelihood of infection among at-risk individuals on daily medication.

"Although behavioral strategies are important, they have always had limitations. And with the advent of PrEP, we know we have a biological mechanism that can prevent infection, "he told the Journal. "The data is solid."

Adopting a strategy designed by Redfield is not without political risk for Trump. That may mean alienating social conservatives who have long been counseled by the government about sexually transmitted diseases – unless that advice is focused primarily on abstinence. Unlike Pence, who once criticized condom use as "a very precarious protection against sexually transmitted diseases," the CDC director said his use would be part of the solution and described himself as never having been "a lonely person" with abstinence. "

James Curran, dean of Rollins School of Public Health at Emory University, said a comprehensive approach works and compared HIV mortality to treatable cancers. "With the available treatments we have for HIV," he told CPR, "it's really a shame that people are dying of AIDS in the United States."

Curran, who spearheaded the CDC's HIV / AIDS efforts for 15 years and was among the first to recognize the disease as an infectious disease in the 1980s, said Trump's goal is not implausible.

"If we have the biological tools for the virus," Curran argued, "it's simply a matter of applying these tools, motivating people, and paying for the things that are needed to make sure they are done."

If Trump can turn the rhetorical aspiration into a concrete health strategy, it will be an issue that continues after the State of the Union address. The flagella now eradicated, such as poliomyelitis and smallpox, have shown more visible symptoms leading to more immediate treatment. HIV, on the other hand, often goes undetected for years, and there is still no cure – just preventive measures.

Political resentment could be another impediment to an already frightening task. If Trump demonstrates "a visible commitment" during Tuesday's speech, Curran urged the most affected communities to give the president a chance.

"If leadership is willing to take steps, then give them a chance and suppose they want to reduce stigma and provide coordinated resources," Curran said. "Keep them accountable for this, not responsible for who they voted for in the last election."

Although Trump has not demonstrated the subtlest understanding of sexually transmitted diseases – he was confused about the difference between HPV and HIV during a meeting with billionaire philanthropist Bill Gates – Curran remains optimistic even if the picture is not enough.

"What if we could reduce deaths by 50% over the next two years?" He said. "Would not that be a remarkable thing?"