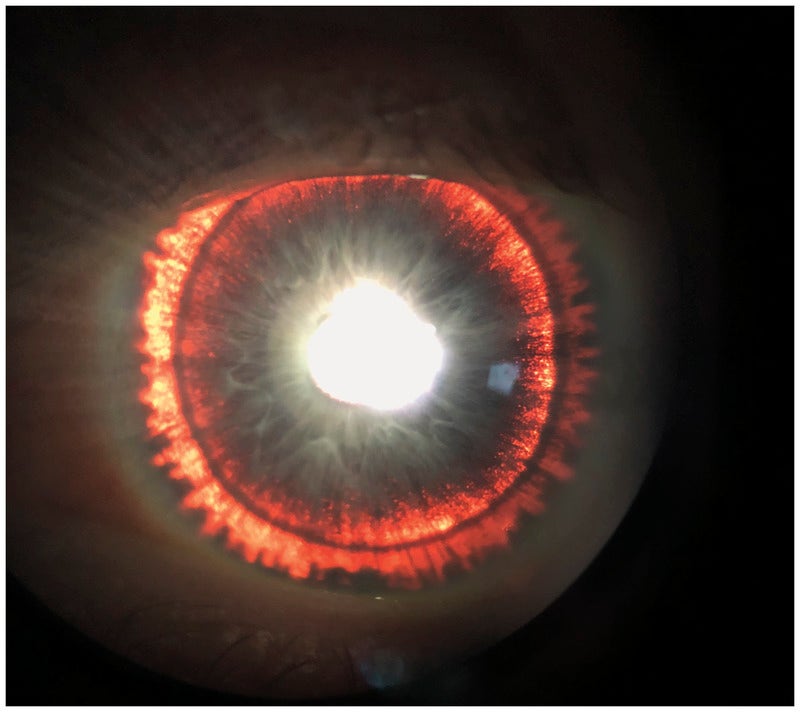 A rare syndrome made a 44-year-old man's eye look eerily like Sauron's flaming "Lord of the Rings" eye.

The case came to light when the man, who was not identified in a recently detailed report in the New England Journal of Medicine (NEJM), went to an eye clinic to restore care after moving to a new area.

The man, who had a family history of glaucoma – a condition that can damage the optic nerve and potentially cause blindness – told his treating doctor that he had already been diagnosed with high eye pressure and was taking medicine to treat it. But after performing an eye pressure test, the doctor noticed that the man's pressure was 21 mm Hg, slightly above the normal range of 12 to 20 mm Hg.

Subsequent eye examination "revealed circumferential iris transillumination defects in both eyes," wrote the report authors at the University of Texas Medical Branch in Galveston. The "glow" coming from the man's eye was the result of the bright light used during the examination that shone on the man's iris, the colored part of the eye. This effect indicates iris pigment defects.

The man's eye seemed to "glow" because of a condition called pigment dispersion syndrome.
(The New England Journal of Medicine © 2019.)

The doctor then diagnosed the man with "pigment dispersal syndrome," which "occurs when pigment granules that normally adhere to the back of the iris come off in the clear fluid produced in the eye called aqueous humor," according to Glaucoma. Research Foundation.

"Sometimes these granules flow toward the eye's drainage channels, slowly blocking them and increasing eye pressure," he continues. Increased eye pressure can lead to glaucoma.

After the diagnosis, the man in the NEJM case report underwent laser therapy to relieve his fluid drainage channels, reducing the pressure in his eyes. He then continued taking medicine to maintain healthy eye pressure levels, according to the report.